The Tao of Home Depot

Last weekend my wife asked me, “Is there anything you need at Home Depot?”

I laughed heartily and noted, for the record, that this might have been the funniest thing she had ever asked me in 26 years of marriage. Although my wife was not as amused.

When I relayed this exchange to Madeleine, my youngest daughter, she said, “Mom asked me that once too. It was followed by a very awkward silence. I don’t think we spoke the rest of the day. We never speak of it, really.”

In my defense, I’ll vacuum, mow a lawn, tinker with anything electronic. I’ll even attempt to clean the gutters, although this invariably leads to every woman in the household running outside in hysterics to hold the ladder steady. But NEED anything at Home Depot? Yeah, like a fish needs a bicycle.

Fast forward to Monday, and I’m at lunch with a sales vice president. He’s just told the story of the house he planned and built himself and now lives in with his family, and how he even secured it from being damaged by Hurricane Sandy. He turned to me and said, “You know, every man should build his own house. It’s one of those things you have to do at least once in your lifetime.”

Last night, in the cold rain, I drove warily past the low-slung, brooding Home Depot that anchors the mini-mall in Hackensack.

Heaven help us, Madeleine. I swear it was mocking me. 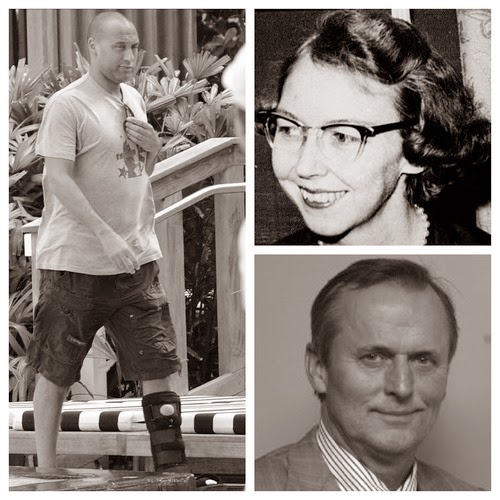 What do Derek Jeter, Flannery O’Connor and John Grisham have in common?
Just another day in my life: 20,518 and counting…
Yesterday, while commuting down Route 287 (the vertebral artery in a map of New Jersey), I was listening to an audible.com recording of “Everything That Rises Must Converge.” This is the collection of short stories O’Connor was working on when she died in 1964. When I was younger… less than 10,000 days old… O’Connor was my smart and quirky writing goddess.
But yesterday, things were different. I was bored by lyrical stories of the historical Deep South. This unsettled me, and I turned it off.
I switched instead to a recording of ”The Racketeer,” the current Grisham best-seller. After only the first few minutes, this book had me hooked. I’m loving it.
This initially unsettled me even more. How could this happen? O’Connor vs. Grisham should be no contest. I could see my younger self self-righteously laughing at me. “Look at you,” he’d say. “You’re just like everyone else.”
And he’d be right. But I wouldn’t say that to him. I’d let the years go by and let him find that out for himself.
This is where the Yankee captain dives into the stands and saves my sanity. The evidence is right there on the back page of yesterday’s New York Post.
Yes, I’m getting older. No, I’ve never played major league baseball. Yes, I know, things will probably be very different in April.
But yesterday, for one day in my life, I may have been in better shape than Derek Jeter.