The Quantum Physics of Eternal Beauty 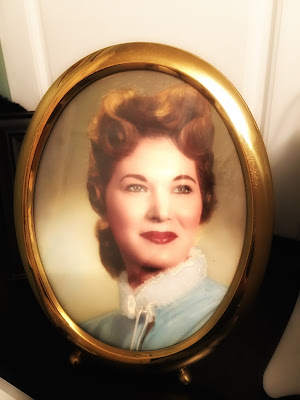 For several years, a photographer had displayed a large portrait of her -- a print from his series of her engagement photos -- in the front window of his shop on Main Avenue.

As a result, Mom was a local celebrity: the Belle of Passaic. People would stop her on the street, or call out from a passing commuter jitney bus, or tap the glass while she was at her job decorating the storefront displays at Kresge’s – and ask if she was the girl in the photo shop window.

My Dad, her betrothed Navy officer, kept a 5x7 version -- the same print Mom keeps in an oval gold frame by her bedside today -- in his bunk aboard the U.S.S. Midway as it toured the Pacific. He even entered it into a Miss Midway contest, where Mom took second place. We reminded her of this every time our family played Monopoly and someone picked a yellow “You have won second prize in a beauty contest – Collect $10” card from Community Chest.

Fast forward to 2017, with Dad having died a dozen years ago.

At dinner last Sunday with the extended family, Mom told the story of visiting Dad's grave that morning and finding a scrap of garbage there. It was a box top from a line of hair-care products called "Forever Beautiful."

With a tear in her eye, she carefully pulled the torn cardboard from her wallet. None of us around the table understood what she meant. She explained that she thought it was a message from Dad calling her "forever beautiful" from beyond the grave.

I felt a little sad no one had picked up on this. Mom has always been beautiful -- and I know Dad would have told her so that day, if he could.

And then, the very next day, he did. 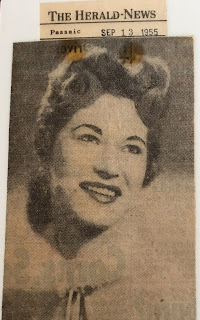 He did so through my youngest daughter -- who was always so close to him that they evidently developed a quantum entanglement. Their energy states are one, no matter how far apart they are. Even death does not separate them, and what happens to one can influence the other. It's the nature of love.

My daughter had spent the weekend decorating her small New York City apartment. While she was at work that Monday, my wife stopped by to pick up a ladder we had lent her for the chore. My wife texted me a photo of the finished project: My daughter had hung family photos over a faux fireplace, and in the place of honor was the portrait of the girl in the photo shop window.

I believe that photos, like words on a page, are all part of a grand experiment in quantum physics. It's why I love photography and why I love writing. It's impossible to predict with certainty the impact of anything we create and place out into the world.

In the case of my mother, the existence of this photo still influences our world after more than 60 years.

In a small apartment in New York City there's incontrovertible evidence, to this very day, that Mom is forever beautiful.
Posted by Bob Varettoni at 4:23:00 PM No comments:

A Visit to Citi Field