In Praise of FDU Florham 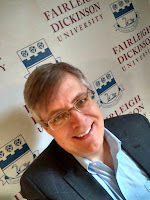 Fairleigh Dickinson, New Jersey's largest private university, has two sites in the state: the Metropolitan campus, along the Hackensack River (near my home), and the Florham campus in Madison, which is on the former estate of Florence Vanderbilt and Hamilton Twombly (near my workplace).

I'm a big fan of the latter -- which, it turns out, was the setting for several scenes in a favorite movie, "A Beautiful Mind."

It's also where a professional group I'm involved in -- IABC-NJ -- holds monthly meetings, and where I've been lucky to be invited to speak to classes on occasion about corporate communications.

I know I'm a big fan because I wear my heart on my sleeve on my Instagram account. See here:


Thank you #Google Assistant for the #blackandwhite #filter of the #ominous #sky over the #FDU #campus this evening. #NewJersey
A photo posted by Bob Varettoni (@bvarnj) on Jul 15, 2015 at 6:14pm PDT


It's not a #sculpture in a #museum, it's the Orangerie Room in the #FDU #Library in #Madison #NJ. This space originally provided Florence Vanderbilt and Hamilton Twombly's estate with a room to store fresh citrus fruit year-round. Looking forward to an #IABC #NewJersey Chapter blogging event here tonight. #njspots
A photo posted by Bob Varettoni (@bvarnj) on Apr 7, 2016 at 2:44pm PDT


Another beautiful night on the #FDU #campus. #Flowers in front of The #Mansion. #NJ #IABC board meeting. #newjersey #njspots #njisbeautiful
A photo posted by Bob Varettoni (@bvarnj) on Jul 20, 2016 at 4:05pm PDT


Board meeting tonight for the #IABC #NewJersey chapter. This is a great spot on the #FDU #campus. Here's info from the #fduflorham website: Hennessy Hall (The #Mansion) is the centerpiece of the campus. This 100-room #Georgian-style masterpiece was designed in the 1890s by Stanford White, and replicates a wing in Henry VIII's Hampton Court. Most of its interior decorations (such as staircases and fireplaces) are in Italian marble, worked by Italian craftsmen. Hennessy also holds the chestnut-panelled Hartman Lounge (the former billiard room) and Lenfell Hall, then a ballroom and drawing room, now used for meetings and special events. #architecture
A photo posted by Bob Varettoni (@bvarnj) on Nov 16, 2016 at 4:14pm PST

She Made Me Laugh: My Friend Nora Ephron by Richard Cohen
My rating: 3 of 5 stars

In “She Made Me Laugh,” we learn that writer/director Nora Ephron is someone who would lead friends on a tour of Italy’s great restaurants, arrive late at one, and then stand and make an insulting gesture to the entire wait staff because they weren’t attentive enough.

This is what passes for loveable to Ephron’s friend, Richard Cohen, the Washington Post columnist and author of her bio.

Well, maybe not “loveable.” Even Cohen seemed to have mixed feelings about this anecdote. Perhaps (permitting me to put words in the head of a much-more-accomplished writer) he thought, “Nora has spunk!” -- in reference to a scene from the old Mary Tyler Moore Show in the type of 1970’s newsroom that Cohen and Ephron both obviously adored.

But, like Lou Grant, I hate spunk. So while Ephron may have made Cohen laugh, the sensibility on display in this book often made me cringe.

Cohen lovingly depicts an era when media and literary gatekeepers hobnobbed aboard David Geffen’s yacht or at a Ben Bradlee and Sally Quinn dinner party. Once, after being slighted this crowd, Cohen proclaims, “That summer, the Hamptons did without me.”

I’m glad that world doesn’t exist anymore. These summers, the Hamptons are doing without all the best journalists and artists and writers. They live, create and “summer” in all corners of the world, enabled and connected by technology. There are no boundaries or gatekeepers. Everyone can be critic, or a star.

These days, the only sure way to tell a decent person from an asshole is if he or she is kind to the wait staff.

Two good things came out of reading this book, however.

First, I am now much more aware of Ephron’s entire career, and I eagerly look forward to reading more of her writing. Before now, I had thought of her as the writer/director of “Sleepless in Seattle” and thought she had written the famous scene in “When Harry Met Sally,” which, it turns out, was improvised by Meg Ryan, Billy Crystal, and Rob and Estelle Reiner.

Second, I can now channel my inner Nick Carraway, since there are several remarkable anecdotes in this book involving the actor Tom Hanks.

So now, as the sun sets on this review, I see a vision of Hanks from across an imaginary lawn. “They’re a rotten crowd,” I shout to him, thinking of all his rich friends summering in the Hamptons. “You’re worth the whole damn bunch put together.”


View all my reviews