My 15 Seconds of Fame

When Pope Francis was leaving St. Patrick's Cathedral in New York on September 24, 2015, I gave him a nervous, friendly wave, and he responded in kind.

He returned a small wave, for a nanosecond, before greeting a group of nuns behind and to the side of me. I had been trying not to block their view, which is how I found myself in "open field" as he walked by.

I had volunteered to help with the media during the event, but... as is the story of my life... I received much more in return than what I had given.

9/11 Memoirs of an Invisible Man

I've updated a small Pinterest site I posted several years ago about Verizon's response to the 9/11 terrorist attacks in New York. You can view it here -- and already nearly half the photos are no longer archived on the company's website, so I'm glad I downloaded them when I did.

I had an unobstructed, panoramic view of the attacks from Verizon offices on the 32nd Floor of 1095 Avenue of the Americas, and I worked straight through for the next two days, returning home on my wedding anniversary. My job was to help represent the company in the aftermath, and I've never been prouder of every one of my co-workers, especially those -- union-represented workers and top management alike -- who rushed to the scene to begin recovery efforts.

At the time, I couldn't grasp the experience. I felt largely empty, worried about my family, but relieved to be busy just the same. I remember images -- for example, a group of machine-gun wielding soldiers standing guard around a makeshift campfire in front of the New York Public Library, in the middle of an otherwise deserted Fifth Avenue, late that evening -- but, really, there were no words.

A year later, I happened to be at a conference in Boston, and I remember 9/11/02 as a windy day, full of foreboding clouds and melancholy... fitting weather for a memorial day of sorts.

During a break a little after 10:30 a.m., I went to an indoor mall to buy Nancy an anniversary gift. I was greeted by the sight of people frozen in place on the shopping concourse... two old ladies holding hands, other shoppers simply standing still, a woman with a stroller looking like a statue. I was taken aback. I was the only one walking through this scene. I thought, for a moment, that I had stumbled across a piece of performance art. Then, I thought I was dreaming -- the way I used to when I was a boy -- and that time had stopped for everyone else except me.

Soon a voice over a loudspeaker thanked everyone, and the shoppers resumed their motions in unison. Evidently, this was a moment of silence in observance of when the second tower had collapsed. I walked into a Museum of Boston shop and fingered an Edward Hopper print of a lighthouse. But I didn't buy it, mostly because the young woman behind the sales counter was crying, and I felt as if I should leave her alone.

I spent the rest of the day apparently invisible, because people ignored me -- walking right into and seemingly through me, engaging in conversations while I stood between them. I wound up buying an anniversary gift from a vendor who didn't even look up from her phone.

Feeling disoriented, I wandered into small St. Francis' Chapel, adjacent to Hynes Auditorium. A young woman wearing a red, white and blue scarf stood in front of the altar. She had a mane of blonde hair that looked like a veil, as if she were an angel. When the chapel started to fill for a 9/11 memorial service, I decided to stay.

A bearded young priest presided over a reverent prayer service: a few readings, a few songs, a poem from a local nun. The closing song -- the funeral hymn, "You Are Mine" -- hit me hard. "I will take you home," sang the angel, and at those words I finally, after a full year, started to openly cry. It took me several minutes to compose myself to leave. When I did, the priest was waiting at the door so I shook his hand and quietly said "thank you."

I passed the Sheraton's piano bar on the way back to my own hotel. A jazz trio was playing "Autumn Breeze," and through the windows I could see the end-of-summer outside world literally being buffeted about by the tail end of a hurricane named Gustave. No one around me seemed to notice or care about the outside winds, or the music. But I was enchanted. I clapped when the song ended, and the trio looked up and smiled and waved to me to sit at the bar.

I spent the rest of the evening nursing beers while enjoying the music, and scribbling furiously on a legal pad. I was writing down everything I could recall about 9/11. Somehow -- and this is the lesson I learned that day -- in the very act of writing, I no longer felt out of place and I no longer felt invisible. 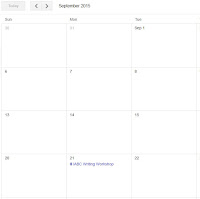 Have you read the recently published “Go Set a Watchman”? One of my favorite writers, Harper Lee (see here), had originally submitted this novel for publication in 1957.

Her editor, Tay Hohoff, was enamored by the childhood flashbacks in the novel, and she recognized Ms. Lee’s obvious talent. But Ms. Hohoff also recognized a weak plot, and she encouraged the extensive re-write that eventually became “To Kill a Mockingbird.”

The two novels offer the same voice, many of the same characters and the same writing style (take that, Truman Capote), but they are vastly different in their appeal and impact.

Every writer needs an editor, and every great writer craves constructive criticism.

That’s why I’m excited our IABC-New Jersey chapter is sponsoring a writing workshop by none other than Ann Wylie on Sept. 21, 2015, on the Fairleigh Dickinson University campus.

Ann, who would no doubt delete the “none other than” in the previous sentence, is the author of more than a dozen learning tools that help people improve their communications skills. Her bio itself is an interesting read, including the highlight that “Ann’s popular writing workshops take her from Atlanta to Amsterdam, from Boston to Brussels, from Hollywood to Helsinki, and from Portland to Paris.”

And, on Sept. 21, she’ll bring her writing workshop to Madison, N.J.

Sign-up information and details are posted on Eventbrite, and we are offering tickets for this full-day workshop at below-market prices (especially for IABC members). It promises to be a great kickoff to another great season of professional development events sponsored by IABC-New Jersey.

The best part? This is the kind of professional development program that can benefit everyone.

Even the next Harper Lee.


This post originally appeared on the IABC-New Jersey website.
Posted by Bob Varettoni at 10:19:00 AM No comments: