Teach Your Readers: A Review of "Wild Tales"

Wild Tales: A Rock & Roll Life by Graham Nash
My rating: 3 of 5 stars

Well, my life certainly hasn't been as interesting as Mr. Nash's... and I bet yours hasn't been either -- especially if, like the poor wretches he writes about in his home town ("Cold Rain"), you go to work every day, pay your taxes and don't do drugs.

In the incestuous other-world of classic rock, you can hate guns but then tell loving stories about your best friend shooting people. You can live on mini-compounds of homes on dozens of acres of land, and be a voice for conservation. You and your mates can ravage your voices and squander a good bit of career productivity on drugs and possessions (with women seemingly placed in that category until you reach middle age), and yet profess that music is always first and foremost. But then you can also helicopter in to benefit concerts and raise money for good causes too -- so what do I know?

I read this book because I enjoyed the early CSNY ("Our House" was a staple on my high school's jukebox for years after the song came out), and Graham Nash's public persona seems refreshingly likeable. And, very likely, he's a great guy in real life. Here, though... well, I wanted to give this book only 2 stars. I found it more preachy than descriptive or insightful, and it made me feel... well, small.

However, I listened to the audio version, which is read by the author, and every once in a while Graham Nash breaks into song. So I gave it an extra star.

View all my reviews 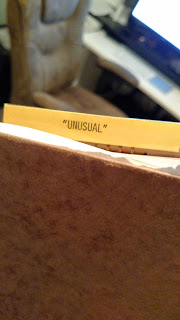 I save everything. In the dark days before Evernote existed, when my media relations career was very young, I used to save physical clips of newspaper articles that intrigued me.

Most were snarky quotes. For example, from a Wall Street Journal article in December 1991, just after President (H.W.) Bush fired his chief of staff, John Sununu, I clipped a cruel joke White House staffers used to describe how unpopular he had become:

Q: If you had John Sununu, Saddam Hussein and Moammar Gadhafi in a room... and a gun with two bullets, what would you do?


I kept these clips in a file folder tabbed “Unusual.” I came across that folder earlier today while cleaning my office. My department is soon moving to a new location on the Verizon campus – and yes, one with a new “open office” layout.

It was an ugly story. It detailed his struggles – eight years removed from his first stint at Apple -- as the 38-year-old head of a computer company, Next Inc. By May 1993, Next had stopped manufacturing computers to concentrate on developing software, the company’s president and CFO had quit, and a consortium of other computer makers had just formed a software alliance that excluded Next.

The story was a litany of Next’s failures. One of the subheads proclaimed, “Flawed Vision.” It was, for all intents and purposes, the Journal's corporate obituary of one Steven P. Jobs.
What floored me – and why I saved the article – were the final sentences of the long story:

Yet Mr. Jobs talks of NextStep as “the operating system of the 90s,” partly because “everyone wants an alternative to Microsoft.” And he continues to contend that [Bill] Gates can’t match his own record of innovation.

“Being the richest man in the cemetery doesn’t matter to me,” he said. “Going to bed at night saying we’ve done something wonderful…that’s what matters to me.”


Everything… everything… Jobs had tried at Next had turned out wrong. It was the worst case scenario. Yet, in summation of it all, he comes up with this wonderful quote that succinctly describes who his competition is, what his strengths are and what his purpose is.

And he continued to believe in this purpose, despite all odds, because it’s a higher purpose:

“Being the richest man in the cemetery doesn’t matter to me. Going to bed at night saying we’ve done something wonderful…that’s what matters to me.”

That’s the true epitaph of Steven P. Jobs. How perfect, and how refreshing and unusual it is to read again in 2014.

Here's a Google-generated photo essay of my trip yesterday morning into New York. Loving the camera on my new Droid Turbo.
Posted by Bob Varettoni at 12:56:00 PM No comments:

The Postmortal by Drew Magary
My rating: 3 of 5 stars

This book is imaginative and thought-provoking. Sometimes I got the feeling that the author was just winging it - but I consider that evidence of natural talent. The plot did veer off in odd directions toward the end... and some scenes make "The Grapes of Wrath" seem like a musical comedy... but I like that fact that I couldn't anticipate where this was headed. I should probably give this 4 stars instead of 3, but the author is a notorious hater of my alma mater (in fact, that's why I chose to read this book), so I'm going to be a bit arbitrary about this. Just like the way SEC officials are in calling offensive pass interference.

View all my reviews
Posted by Bob Varettoni at 10:56:00 AM No comments: