Write As If Syd Penner Were Editing 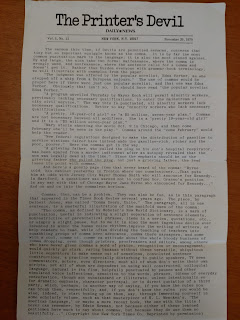 Penner was a legendary copy editor for the New York Daily News in the pre-Internet era. While a Google search of my new Verizon colleague “Arianna Huffington” plus “Huffington Post” will yield about 456,000 results in 0.36 seconds, a similar search of Penner’s affiliation with the News yields just three results.

As Paul LaRosa notes, Penner wrote an internal newsletter called “The Printer’s Devil” about the craft of writing and telling stories on a deadline.

Late in his career, Penner also helped train new writers in NYNEX’s PR department – and I had my first news release drafts marked up by this unfailingly polite and obsessively thorough editor.

I should have kept souvenir copies of the handiwork of Jimmy Breslin’s editor, but instead I've salvaged only one old mimeographed copy of “The Printer’s Devil.” Read this, and you will appreciate immediately that, to Syd Penner, every word was precious. 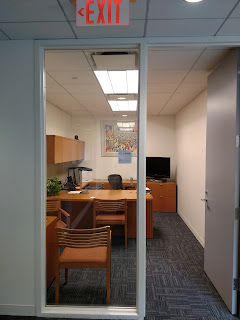 Years later, another colleague – Steve Marcus, a former award-winning reporter for The New York Post – had the task of editing the copy produced by Verizon’s PR department. Marcus knew Penner well, and he had the same respectful touch in eviscerating all our news releases and blog posts.

I’ve seen many executives retire, and most are barely remembered the day after they leave. Such is the nature of business.

Yet Steve retired about two months ago (that's his empty office in the photo), and there’s still a gaping hole here. Such is the nature of art.

Without Penner and Marcus, we’re all on our own – and we’re scrambling. Many folks here have turned to our colleague Harry Mitchell for editing help in the interim, but Harry too is retiring from Verizon at the end of this week.

With the prospect of losing even Harry as a sanity check, another colleague, Libby Jacobson, recently sent me an email about a Techdirt article, “Comcast Really Wants Me To Stop Calling Their Top Lobbyist A ‘Top Lobbyist’.”

She bet I could come up with some tips based on that post, wherein a PR person parses the legal definition of the word “lobbyist” in defiance of common sense – and, in the process, generates much more unwanted attention.

Here are five tips to help writers in PR departments survive without a Syd Penner at their side:

PR should simplify. That’s hardly ever the case, I know, because I’m also the author of Verizon’s earnings releases – but at least that should be the goal.

Even worse than PR is the Orwellian doublespeak of politics, and I highly recommend books such as Barton Swaim’s recent “The Speechwriter.” It’s interesting, and entertaining, to read about how politicians communicate – and politics is a field that, by its nature, is always on the leading edge of new communications and PR practices.

Still, it isn’t helpful to only read about things that could help you on the job. My wife is the most educated person I know – largely because she loves reading newspapers from cover to cover. She discovers new ideas because she isn’t only reading about things she thinks she wants to read about.

Recently, I read a marvelous memoir, “Another Little Piece of My Heart,” by the writer Richard Goldstein. His career path and point of view on many topics are seemingly the exact opposite of mine. Yet I was thrilled to read about his own Syd Penner – the legendary, and Google-famous, Clay Felker. Through the magic of the Internet, I even sent Richard a note about the book. He politely replied, and the universe didn’t implode.

Everyone needs an editor. You should jump at any opportunity to work with someone to improve your writing. One organization I’m involved with – IABC’s New Jersey chapter – is hosting a day-long writing workshop with Ann Wylie, a talented editor who is well-known in PR circles. If you can be in Madison, NJ, on Sept. 21, there probably isn’t a better use of your time.

This has never been more important. Another magical side of the Internet is that every word you write now lives forever.

One of my favorite books (well, at least it had been a favorite before my wife and I raised two daughters) ends by evoking the secret of durable pigments.

One reason we all want to write and post and share is that we want to leave our mark on the world. Social media is the new durable pigment, and if we want to communicate something that has lasting value, we should choose our words wisely.

That’s why, in this very sentence, I’ll simply mention the names of Harry Mitchell and Syd Penner.

Goodbye, Harry. We’ll miss you. I hope to be seeing you soon, forever linked with Mr. Penner, on Google. 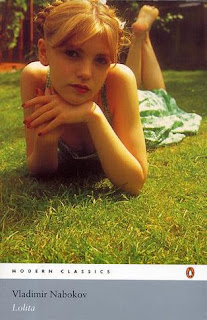 I was half the age of Nabokov’s protagonist when I first read “Lolita” – and it enthralled me. As of my last reading, just a few weeks ago, I’m about the age of Nabokov himself when he wrote his love letter to the English language. And it repelled me. (You can always count on a Goodreads review for a fancy prose style.)

I guess I’m a grownup now. I’ve helped raise two daughters in the meantime. And, over time, I’ve come to understand that people aren't as smart as they think they are. Even the genius Vladimir.

“Genius” is a word that appears many times in this book, by the way – the author seems quite enamored with it. Odd that there are very few words relating to the impact of the nearly world-immolating warfare that had ended just a few years prior. Or, say, any description of how Humbert and Lolita might have managed to spend Christmas Eve together.

That would be too prosaic. And this, this book, is a work of Art. The real-life horror in “Lolita” is masked by language -- the demeaning and beating of women, deaths by childbirth and cancer, Humbert’s monumental callousness and narcissism, poor Charlotte… As for the great poetic love, it’s really nothing more than pedophilia played out in prostitution, threats and manipulation, as Lolita cried herself to sleep every night.

There’s nothing wrong with artifice and pretty words. Every Memorial Day weekend, I find myself re-reading “The Great Gatsby,” and it never ceases to enchant me. It’s become a favorite of one of my daughters too.

I actually enjoy life as a sentimental wretch. It’s just that I now realize that Humbert Humbert isn’t a kindred spirit. Instead, Humbert is really just Vladimir’s comical Gaston Godin character with a better haircut.

And, about that haircut, Vladimir... I mean, about that parenthetical scene in “Lolita” where a barber in Kasbeam cuts Humbert’s hair while telling stories of his long-dead son as if he were still alive…

I wonder if perhaps his story would have been the more poetic one to tell.

A Prayer for New Orleans... in Black and White

I had intended to post a collection of colorful photos on Facebook from a recent visit to New Orleans, where I met up with my sister from California.

But the photos told a more important story in black and white. Let me explain: 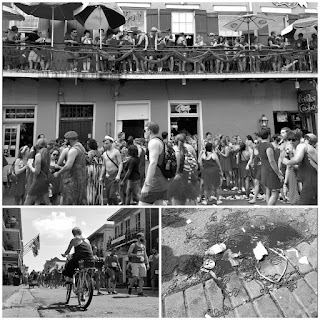 It's now been 10 years since Hurricane Katrina, and I found a city full of warmth (literal and figurative), sound (noise and music) and smell (food and garbage) in its wake.

New Orleans was also bathed in red -- on the occasion of its annual Red Dress Run.

The Times-Picayune was an unapologetic cheerleader of this event, portraying it as a massive dress-up of harmless fun designed to raise $200,000 for local charities. Silly feature stories -- "Were you among those who dared to bare (your legs)?" and "On the hunt for the perfect red dress" -- were accompanied by photos of young men wearing red skirts, dresses and negligees.

Meanwhile, the comments sections to these same stories suggested a darker side -- just an excuse for people... primarily rich white people... to throw on something red and drink: "Mardi Gras minus the floats... a big frat party with a bunch of post-college desperados... another embarrassing display for people to be obnoxious and narcissistic..."

I don't know what the truth is -- but the only images I remember, like one below, are decidedly black and white. 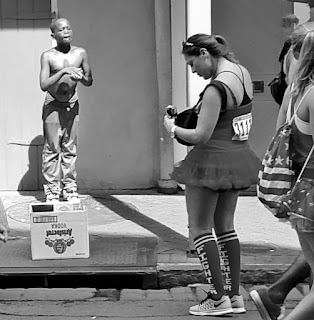 Here's a boy, drenched in sweat, tap dancing on the sidewalk of Bourbon Street for spare change. It's high noon and literally 100 degrees in the hard-to-find shade. In the background, the boy's young mother is urging him and his younger brother to keep dancing.

I'm right in the middle of the street, and I blend in perfectly with all the faces. The only way I stand apart is that I'm not wearing red.

I'm in a vast crowd of sloppy drunks, in all stages of red undress. A frat boy impatiently pounds the hood of an ambulance trying to snake its way up the street. A bouncer sidles up and jovially offers me a "Big-Ass Beer" in a go-cup, inviting me inside, where there's air conditioning blasting from a huge open entranceway and where, he laughs, "There's no cover charge for white folks."

Still further up the street, an American flag hangs next to a red dress mounted on an adjoining flagpole. On a second-floor balcony, so many college-aged drinkers are packed together that the wood flooring is noticeably buckling from their weigh. The coeds resemble the young women in the University of Alabama's sorority recruitment video.

A nearby signpost tells me I've reached the corner of St. Ann Street. Its namesake, in my religious tradition, is the mother of Mary and the grandmother of Christ. She is also known as Mother of the Poor. And, yes, in iconography she wears a red dress. 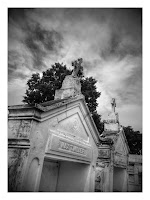 The next morning, I took an air-conditioned minibus tour of the town. A downpour the previous evening had washed away the smell of the garbage on Bourbon Street. We visited the City of the Dead, where our jovial tour director, a longtime resident named Dino, told tales of people being buried alive.

Dino also drove us past small houses still devastated and gutted from 10 years ago in the Upper 9th Ward. He told us he couldn't drive us into the even-more-Katrina-damaged Lower 9th Ward because residents there had long ago grown weary of all the tour buses gawking at their neighborhood. They had started to charge tour operators admission fees.

It's all so complicated. The older I get, the more I see shades of gray. So instead of a Facebook post, let me offer this prayer:

Dearest St. Ann, Mother of the Poor, on this 10th anniversary of an American tragedy, help us change our world for the better. Show us the rich colors of people celebrating together, not separately. Extend the joy and generosity of spirit found in New Orleans to reach all in poverty, all still waiting for a home and all still searching for answers.

Scenes From the Citigroup Atrium 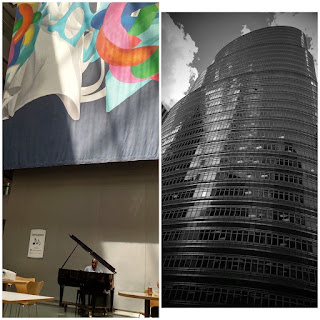 I had a meeting this afternoon at a PR agency on the East Side, so I worked from home this morning and drove in. I thought I’d meet my daughter tonight for dinner so she might have a relaxing ride home, avoiding the Port Authority.

I wound up waiting in the atrium at the Citigroup Center both late morning and early evening.

In the morning, a piano player was interpreting a jaunty version of Gordon Lightfoot’s “If You Could Read My Mind.” I walked outside and took a photo of the “Lipstick Building” across the street, and Google’s “Photo Assistant” magically converted it to black and white. Again. Google seemingly does this to all my New York City photos, as if “Woody Allen” were my default filter.

In the evening, I texted my daughter to see if she wanted to meet for dinner, but she immediately responded that she was too busy at work right now. So it promises to be another late night for her.

If only Google could filter my worries.