Hey, Google, Show Me the Odds of a Miracle


As February comes to a close, I’m still thinking of Google’s “Loretta” Super Bowl commercial, which has so far been viewed more than 61 million times on YouTube.

The ad was a discussion topic at a recent event sponsored by the New Jersey chapter of IABC (International Association of Business Communicators).

To Blake and Becker, Google’s Loretta ad “humanized tech better than anything in a long time.”

Those in the room nodded in agreement, and a few said the ad had moved them to tears.

Less than two weeks following the “Big Game,” Blake and Becker noted that this year’s ads, with few exceptions, hadn’t been as memorable or as entertaining as the half-time show. Many advertisers desperately attempted to cram celebrities into vignettes with confusing messaging.

Upon further review, I’ve discovered that not everyone felt the same as our IABC focus group. On the positive side, I was even more moved to learn that the ad is based on a true story.

On the negative side, tech guru Shelly Palmer called it “the most evil advertisement” he’d ever seen because Google doesn’t disclose that it uses the information provided by the widower in the ad -- and by all of us in real life -- simply for marketing purposes.

Similarly, Joelle Renstrom wrote about “The Sinister Realities of Google's Tear-Jerking Super Bowl Commercial” on Slate. And then there’s this parody ad produced by Gardiner Bryant, with its coda that calls out Google’s “creepiness”:

It seems the world is divided in two: many who accept the ad at face value, and many -- like my wife -- who wonder about the implications and unintended consequences of letting technology supplant real human interaction.

I think, after all, that I still share the view of my friends at IABC.

I don't think the ad shows the extent of Google’s power; I think it shows Google’s limits.

Something that happened last Sunday explains why, and I wanted to post about it tonight because I fear my reasoning is as ephemeral as the waning hours of Leap Day.

Last Sunday, family and friends celebrated the 90th birthday of my uncle, a retired priest.

As my wife and I drove to the party at Enzo’s Ristorante & Pizzeria in Budd Lake, NJ, I thought a lot about Fr. Julian’s life.

Not to “Loretta” him here, but I remember a conversation I had with my grandmother -- who would have been 97 at the time -- one summer, years ago. 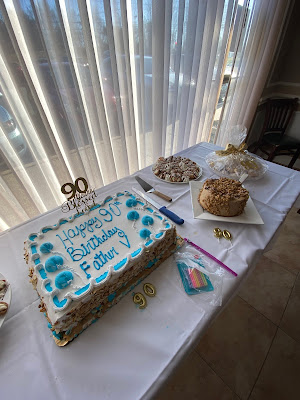 As we sat on the front porch of her (now Julian’s) house in Budd Lake, Nonna told the story of the days following Fr. Julian’s birth: he had been so sick that the best doctors were convinced he would die within days.

Nonna said she prayed to Mary to keep him alive. She vowed to always take care of Julian, no matter what... believing, even if he survived, he would require 24/7 care for the rest of his life. She promised God that if only Julian would live she would never ask for anything else for herself ever again.

She never did. She never had to. She considered herself the luckiest mother in the world.

Julian grew to be the strongest of the Varettoni boys (and both his brothers were athletes and Navy officers). He always took care of Nonna, just as he has helped countless others throughout his life.

The miracle of Fr. Julian’s 90th birthday party is something Google could never have predicted. He, like Loretta and her husband, have had wonderful lives.

They, like the rest of us, are also among the rabble who share general similarities that can exploited for commercial gain. We’re the same rabble who do all the working and playing and living and dying -- but we all have individual stories that Google can’t get its fingers on.

Our lives are not algorithms. Love and death are unfathomable mysteries. We’re all miracles in our own way.

Not even Google can commoditize our souls.

I stumbled upon a great tribute last night: the new exhibit at the George Segal Gallery on the Montclair State University campus.

It's an installation showcasing the work of photographer Klaus Schnitzer, and the influence he's had on pupils throughout his 49-year tenure as an Art and Design professor.

The exhibit runs through Saturday, April 4, 2020. It includes work by 54 of Schnitzer's students, and you can read more information and details here.

I was there last night to show support for a school my wife and oldest daughter both attended. My daughter -- who I am so proud of -- graduated there with a teaching degree. She's currently a special ed teacher, and she's also currently studying to obtain her master's degree at Montclair State.

Susan Cole, the university's president, introduced herself to us last night, which was very sweet. She said something important and true about this state school.

She proudly noted that while many other schools strive for diversity and inclusion, Montclair State is already diverse and inclusive.

Just like the best parts of New Jersey itself, I'd add.

I was delighted and amazed by the gallery's current exhibit. Consider stopping by before April 4. I think you'll be delighted too.

This is a wonderful testament to a productive and meaningful career, to the profound influence one life has on so many others, and to the enduring legacy of art.

Of all the political theater I've witnessed over the past few days, none took me by more surprise than Congressman Bill Pascrell's performance this past Saturday at the historic Hamilton Club in Paterson, NJ.

The occasion was the 40th anniversary of the Poetry Center at Passaic County Community College. You can read about the center, and its legendary founder and executive director, Maria Mazziotti Gillan, here and here.

I attended the event on a lark -- because I love poetry, and I wanted to hear the poets who had won this year's Allen Ginsberg Awards. I was expecting to be among perhaps a dozen attendees. In fact, there were many, many more.

He said he was a lifelong fan and writer of poetry. At the event, he read a poem he had written many years ago. It was scrawled in a script reminiscent of my grandfather's handwriting. Here's the 90-second video:


Witnessing a politician's simple and unapologetic ode to wanting to live life as a doorman was an unexpected blessing.

Perhaps appreciation for poetry can repair our losses, since we've otherwise seen the best minds of our generation destroyed by madness. 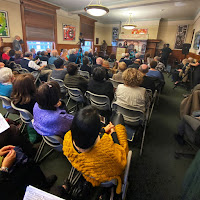 Other highlights from Saturday included:


The historic Hamilton Club itself was a surprise and wonder. As were the displays by Gaetano Federici throughout the building. Here's more about the sculptor, and here's his bust of David in front of a window overlooking downtown: 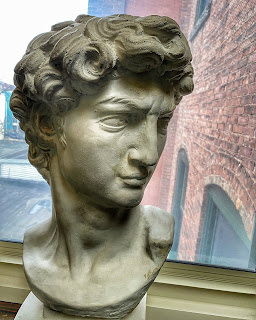 The charm of the event even extended to the catering, provided by an opera singer (Sheldrake Lukas, left) and a poet (Xandt Wyntreez): 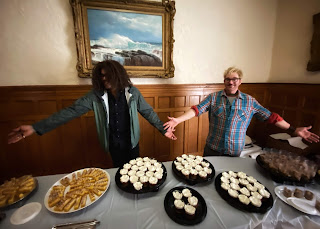 Finally, I walked away from the event with a bag of swag, including a print of the event poster, featuring a beautiful image of Hamilton House by photographer/poet Mark Hillringhouse. At the event, Mark said he sought to take an image of the building "that seemed to glow from the inside... the same way poetry makes us feel." 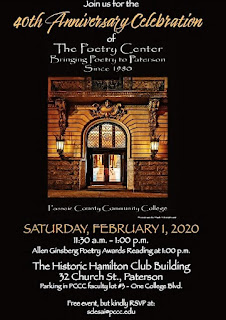 The swag also included a 40th anniversary t-shirt and a thick, bound copy of The Paterson Literary Review (2012-2013).

If anyone would like that copy, drop me a line at bvar@verizon.net, and I'll mail it to you for free.

Feb. 1 was also the deadline for next year's Allen Ginsberg Awards. I submitted one of my poems previously posted here.

Considering the quality of the competition, it will be difficult to get enough votes for an honorable mention. Harshman -- one of two first-prize winners this year (Francesca Maxime and her poem, "Pleather," was the other) -- prefaced his reading Saturday by noting that he had long-ago "graduated from rhyme."

I never did. With apologies to Mr. Ginsberg, epic free verse is not my style. I blame Mr. Poe for that.