The Mystery of Bertha Reetz 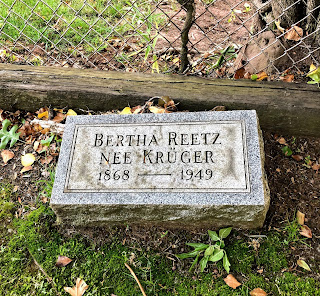 But where is her body buried?

Mrs. Reetz was at least 80 when she died in 1949. According to suburban legend, about three decades later her tombstone was found lying casually by the side of a road in New Milford, perhaps hundreds of miles from her home.

Local police tried in vain in the pre-Internet era to identify its owner. Eventually, the borough's Department of Public Works unlocked a fence protecting the historic grounds -- last used for a burial in 1928 -- and placed Bertha's marker there for safe-keeping.

This Mystery of Bertha Reetz came up in conversation this past weekend as the borough, which recently took ownership of the cemetery, held its annual Memorial Day Weekend ceremony to honor the memory of the veterans buried there.

This year was a special occasion. Attending the ceremony were relatives of Cornelius Bogert, a private in the New Jersey Militia during the Revolutionary War who was buried in 1825.

On Friday evening, Bogert's grave received a flag and a flower from a long-lost relative, Terry McQuillin, who traveled with her husband, Lee, from Branchville in Sussex County.

According to this northjersey.com story, McQuillin is related to Bogert and 12 others buried in the cemetery, since her family descends from David Demarest, the French Huguenot settler of northern New Jersey who founded New Milford.

One person attending the ceremony noted that Bertha's tombstone was more modern than the others. It also haphazardly faces north, on top of a tree root, while all the older gravestones face east.

According to historical records, the French Burying Ground is the oldest cemetery in Bergen County. It's the final resting place for many members of prominent French-Huguenot and Dutch families who settled in the area in the 18th and 19th centuries.

It was first used in the Spring of 1677, after the family of David Demarest -- who fled his homeland to escape religious persecution -- sailed up the Hackensack River to settle into a new home. David's wife, Marie, fill ill with smallpox during that voyage and died. She was the first person buried here, on a bluff overlooking the river.

There are two inventories of the graves at the site. A 1902 inventory by John Neafie does not, of course, include Bertha, who would have been 34 at the time. One hundred years later, a 2002 inventory by the New Milford Girl Scouts identified approximately 175 tombstone inscriptions. Bertha is listed there, 53 years after her death.

What we don't know:

A few people interested in local history have tried researching her name, to no avail. Internet searches lead to sites such as "Find a Grave," which only notes that she is buried in the French cemetery.

As one borough resident noted, "We're happy to have given Bertha a home, and she's always welcome here. But we'd appreciate any help in returning her gravestone to its proper place."

Can anyone help solve the mystery of where Mrs. Reetz is really buried?

If You Believed They Put a Man on the Moon...

Two news items this week attracted the interest of the little-boy-who-wanted-to-be-an-astronomer in me.

First, this nj.com article explained that last night's full moon -- which glowed huge and distant overhead -- was a rare type of blue moon, since it was the third of four full moons appearing during the spring season of 2019.

Many also refer to May's full moon as the "flower moon," because it's the time of year when many flowers bloom.

Second, this engadget article explained that if you were fortunate enough to watch the Apollo 11 Moon landing as it happened in 1969, NASA wants to hear from you.

Here's the info: "NASA recently launched a story program that asks the public to submit audio recordings of their Apollo 11 memories in a bid to create an oral history of the event in sync with its 50th anniversary. All you have to do is record a story or interview... shorter ones are preferred, email it and details to a special address (apollostories@mail.nasa.gov), and check your inbox in case NASA wants a follow-up."

Inspired by the sight of last night's big blue flower moon, that's exactly what I did. Here's the SoundCloud version:

And here's the text (and maybe you could listen to this great R.E.M. song while reading):


The morning after Neil Armstrong took his first step on the Moon, our family visited my nearly 100-year-old great grandmother in a nursing home. We called her Bisnonna. She had lived most of her life in Ferno, Italy — "ferno" being the Italian word for "Hell." She was spending her final years in New Jersey.

We were all excited about the moon landing, and her daughter, my grandmother, tried to explain to her -- in the soft, melodic, mostly-Italian, part-English language they had developed between themselves -- what a spaceship was. But the words didn't yet exist in either the English they commonly understood or in Italian.

So, much to our frustration, we couldn't make Bisnonna comprehend how it was possible for a man to ride on a rocket that was launched into space, and eventually set foot on the moon. To Bisnonna, such a thing was beyond her experience and beyond her capacity for faith. She died just a few weeks later, believing in eternal life.

Do you have a memory of the moon landing? I'd love to hear it. So would NASA!

Mom vs. Deer in Totowa: What Would You Do?


My elderly, widowed mother is fighting her own Battle of Winterfell -- and she needs our help.

Call it The Battle of Echo Glen, which is a residential subdivision of Totowa, NJ, that abuts a formerly abandoned asylum.

Unlike the fictional "Game of Thrones" blood fest, this combat is real and began quite innocently. It has evolved into a story of pinwheels and soap flakes.

Our noble quest? Protect the flowers in Mom's beloved garden.

Here's the story of how we arrived at this desperate place.

"Bobby," said Mom on the phone several months ago, "there are reindeer visiting me in the backyard!"

Her voice was breathless, full of awe and wonder. One deer, a buck with regal antlers, seemed to her a particularly magical sight.

I can't be precise about the date of this call, but it was likely around June 2018, after construction began to level the North Jersey Developmental Center, a 188-acre compound of buildings permanently closed in 2014.

I've written about this abandoned asylum before.

This center had opened in 1928, preceding Echo Glen's construction by 30 years. Originally called the North Jersey Training School, by 1953 the center served 625 women with neuro-developmental disorders and included a 275-bed nursery, making it the only one in the state that housed children. The total of residents dwindled over the years, numbering 190 before the center was shuttered.

Last May, 35 buildings on the site were demolished to make way for a 257,000-square-foot data center for J.P. Morgan, a 590,000-square-foot assisted living facility, a medical office, a research and development facility, and associated parking lots.

This demolition was the opening salvo of The Battle of Echo Glen, since it was followed by the leveling and removal of countless trees. The woods there had not been cut or disturbed since the property was acquired in 1916, more than 90 years ago.

On a recent Sunday, after a visit to Mom, I saw newly paved, open roads at the site, so I took a brief detour and was astounded by what I saw. There's now hardly a tree to be found. It's as if every square inch of the property is being developed, as the Boro of Totowa seeks as much ratable property tax income from the site as municipally possible.


As the months have passed, these deer have ruined my mother's prized garden and other plantings. This has left her heart-broken.

She is not a lone casualty, either. Deer infestation is now a constant source of chatter at the weekly Monday meetings of Totowa's senior group.

Neighbors have devised their own strategies to fight back. One popular tactic has been to shave cakes of mint-scented Irish Spring soap and scatter the flakes on leaves and branches.

Mom's weapons have ranged from inexpensively hopeful (installing twirling pinwheels from the Dollar Store in her garden to try to frighten the deer when the wind blows) to disappointingly costly (a monthly fee to have her lawn and garden sprayed with deer repellent, and to have deer droppings removed). Not to mention two strategically placed $69.95 solar-powered devices that are supposed to emit a deer-offending sound undetectable to humans.

All to no avail.

Families of deer routinely find gaps around the low fences in her neighborhood to feast on her garden. Along Mom's back fence, arborvitae branches have been neatly chewed clean from the ground to the jawline level of a deer. The natural green ivy that once graced Mom's back shed has been replaced with plastic green ivy she purchased at Hobby Lobby.

Mom's resolve is not broken, however. On a recent Monday she heard a rumor at the Totowa senior club that deer do not like the taste of vinca. She now intends to purchase an arsenal of these flowering plants at Home Depot to restore some color to her garden.

As Mother's Day 2019 approaches, I vow to better serve at the side of The Queen of Echo Glen and Protector of Her Realm as she fights this never-ending battle.

Don't get me wrong. I have nothing against deer. Can we all get along?

The Boro of Totowa has nothing against deer and other wildlife either:


The thing is, I love Mom more than I love deer, and more than Totowa loves deer. Also, I now fear that Mom might get bitten by a tic when she ventures out to try to repair her garden.

So I'm enlisting your support.

What do you advise that we do in this situation?

Like Jon Snow, I'm struggling to do the right and honorable thing. I already know I can't save the trees. I just want to help Mom -- in fact, help all the residents of Echo Glen.

They deserve a better fate. All their property tax dollars saved by the massive redevelopment of a former asylum should not be spent instead on mint-scented soap, pinwheels, ultrasonic sound machines, vinca plants and deer repellent.