Elvis Has Left the Building

My long-time colleague Steve Marcus retired this past week. Here’s what I said about him at his reception, before he left the building... 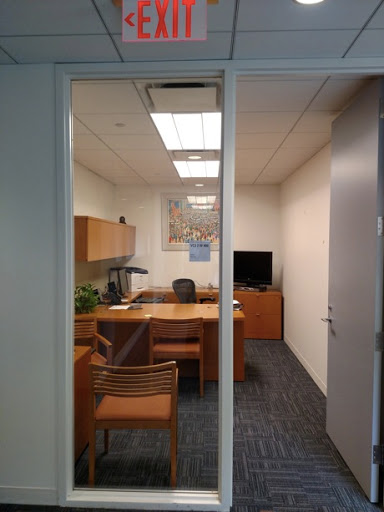 Steve modestly wanted a small reception for close friends, but we soon realized the conference room we had scheduled was too small.

Like the police chief in the movie “Jaws” (released 40 years ago), we quickly realized, “We’re going to need a bigger boat.”

Why? Because Steve has influenced so many people over the years… He’s been a mentor and trusted colleague to all of us here. This is truly worth celebrating. As EB White once noted: “It is not often that someone comes along who is a true friend and a good writer."

Nearly 30 years ago, when I had just started at a corporation called NYNEX, we got word that our largest subsidiary, New York Telephone, had just made a major hire -- an award-winning reporter from the New York Post and one of the members of the Inner Circle, a great journalistic institution whose roster is made up of legendary New York City political and community-interest reporters.

Of course, I only knew Steve by reputation back then – which could be summed up by everyone’s reaction at the time: “Thank God, now we know everything will be OK… we’ve got Steve Marcus working for us.”

And since then, I’ve been honored to work at Steve’s side:

· At New York Telephone, he was our chief on-camera spokesman, because on TV and radio his directness and his concern for customers was so self-evident.

· NYNEX became Bell Atlantic, and Steve was the company’s international spokesperson for a time.

· When Bell Atlantic became Verizon, Steve was the company’s voice during our first labor negotiations and later, as most of you know him, he became the company’s chief editor and voice of sanity.

Over all this time, I’ve never heard a single negative thing said about Steve. This is almost impossible in today’s world – but it speaks to his work ethic and talent and the respect he shows everyone around him.

Steve, we’re going to miss you. You’ve earned our respect. I think the general reaction here today is, “Oh God, will everything be OK without Steve Marcus working for us?”

One final note… Steve would have officially worked for Verizon 30 years next month. But I think it’s especially fitting that he’s leaving before then.

There’s an old journalistic tradition of putting the number 30 at the end of every story that’s filed.

I think it’s symbolic that there’s not a 30 on Steve’s career at Verizon, because, Steve, all your friends here know that this is far from the end of your story. 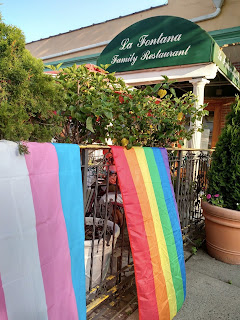 Brands were going crazy with rainbow-themed tweets (using the hashtag “LoveWins”), and corporate social media and marketing departments all over America were in a frenzy. A thoughtful post by Scott Meslow of “The Week” pretty much summed up my own thoughts, but better:

“Your own skepticism about these kinds of social media posts may vary. On the one hand, public support and advocacy isn't meaningless; when a cultural movement achieves enough open support, it can eventually lead to real, recognizable results. But there's also something a little unseemly about the self-congratulatory eagerness as these brands have jumped to associate themselves with an extremely popular social movement — and, of course, managed to shoehorn in pictures of their products while doing it. Corporations, remember: The next time something big and important and deeply meaningful to a bunch of people happens, you don't need to rush out a Photoshopped copy of your logo and slap on a hashtag. You can just, you know, say nothing.”


I had taken the day off and went to dinner tonight in Nyack, NY. From the porch of The River Club, my wife and I had a scenic view of the construction of the new Tappan Zee Bridge. Afterward, we walked around town, and even La Fontana Family Restaurant was proudly displaying a gay pride flag outside its doors.

On Facebook, all my social media friends have been praising the Supreme Court ruling. It’s amazing to me how quickly society-at-large has changed perspective on this issue. This change has surely been fueled by the power of technology, and social media, to expose all of us to a world bigger than ourselves. A high school friend posted, “Love first. Everything else later. In fact, everything else is meaningless without love.”

It turns out she was actually referring to another post from Fr. James Martin, editor of the Jesuit magazine America. I reprint it here, since it also pretty much sums up my own thoughts, but better:

No issue brings out so much hatred from so many Catholics as homosexuality. Even after over 25 years as a Jesuit, the level of hatred around homosexuality is nearly unbelievable to me, especially when I think of all of the wonderful LGBT friends I have.

The Catholic church must do a much better job of teaching what the Catechism says: that we should treat our LGBT brothers and sisters with "respect, sensitivity and compassion."

But God wants more. God wants us to love. And not a twisted, crabbed, narrow tolerance, which often comes in the guise of condemnations, instructions and admonitions that try to masquerade as love, but actual love.

Love means: getting to know LGBT men and women, spending time with them, listening to them, being challenged by them, hoping the best for them, and wanting them to be a part of your lives, every bit as much as straight friends are part of your lives. 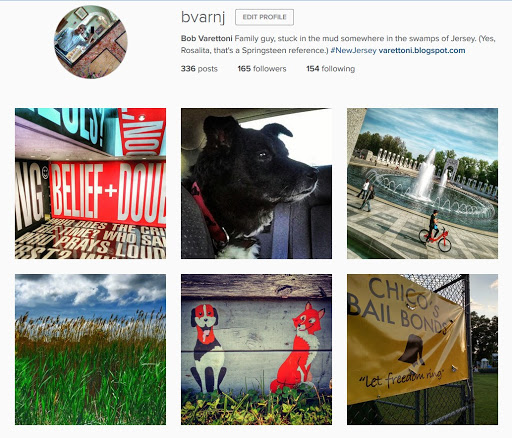 Of all the social media sites, my favorite -- by far -- has been Instagram. It's simple, it's immediate, it tends to be nurturing. The best part is that in order to play, you have to create something. Although it emphasizes visuals, I've come across captions that are clever and insightful -- and the mere fact of sizing up a scene and trying to think of a way to capture it has made me a better writer. I think.

Well, at least a better observer... and that's half the battle.

Sometimes -- from the unlikeliest of sources -- even art emerges from among the bright red hearts, playful emojis and hashtags, and the extraordinary variety of ordinary life.

Email ThisBlogThis!Share to TwitterShare to FacebookShare to Pinterest
Labels: Technology 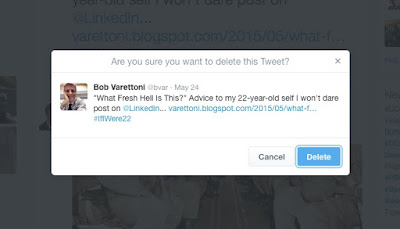 If you really want a tweet to be noticed, should you delete it?

That seems to be the PR lesson from two recent news stories: Twitter's shutdown of a site that saved politicians' deleted tweets, and one CEO's Twitter musings in the midst of M&A speculation.

Since-deleted but widely-reported tweets may be as old as Twitter itself -- which is to say that images of Anthony Weiner have been burned into my memory since 2011. But as time passes, I wonder if there are Machiavellian PR practitioners (as opposed to the garden-variety Orwellian PR practitioners) who intentionally post and then delete tweets for the sheer impact.

You can tip the media by saying you're shocked, shocked, that something like this could be posted -- in much the same way that you can ensure coverage by having someone slip the media what would otherwise be a press release (remember those?) and calling it a "leaked document."

Since we've long (since March 2015) been living in the Periscope Age, we've already seen the rise of behind-the-scenes, often "unauthorized" videos too. None I've yet seen has been blatantly manipulative, but already my email inbox has been inundated with PR experts pitching me on tried-and-true methods of integrating Periscope into media plans.

Imagine being an editor or journalist (remember those?) in today's world. You already know that everyone you talk to has an agenda... but now everyone has a shiny new app or technology tool to try to fool you too.

In that sort of environment, how can PR people break through the clutter?

Treat reporters and editors like real people. Help them do their jobs. Invest the time and effort to become a trusted source.


You can still be honest, and be human, and be an unapologetic advocate for your company or your cause.

Not everything in the world is fake. Take, for example, the Arthur Ashe Courage Award that ESPN gave to Caitlyn Jenner just the other day.