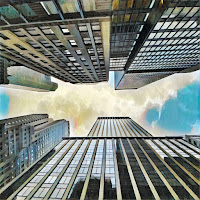 As promised mid-month, here are the remaining 11 poems I've written during April (aka "National Poetry Month"), based on prompts from New Jersey poet Alicia Cook.

The first prompt was "those blue narrow streets." In the resulting poem, I declared myself Superman while walking to work.

I've listed the other prompts at the bottom of this post, and I've added a few notes for context.

Today's poem "Life Is Short" is, oddly, my favorite.

That, or yesterday's. The one with the penguins. 🐧

with the East River at my back

on a cloudless morning

after an evening rain.

I bound a skyscraper

in a reflection of still water

along these narrow blue streets.

I was so excited to win

the prize at the boardwalk arcade

that both feet left the ground.

I was a lucky duck,

brought back to earth

by the gravity of your forbearing smile.

Mine, mine, all mine! 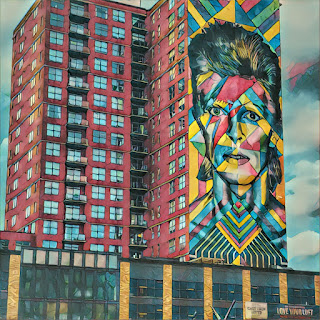 Is there life on Mars?

Life only exists where there's water,

in lakes hidden below the icy surface.

it's a God-awful small affair.

Life only exists where we let it:

Take a look at the lawman

beating up the wrong guy. 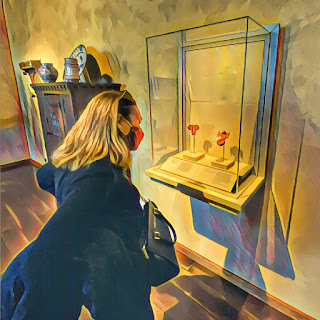 Mysteries of the Rosary**

Each decade of my life,

I have stood in admiration

of a single prayer bead,

cloistered at The Met:

a visit with my children,

a visit with my wife when our children had grown.

opens to a triptych of Christ’s early life,

and shuts with his crucifixion.

Each decade of my life,

the display-case reflection of my aging face

mixes with this immutable art.

and I take a slower look.

Prepare for the stresses that will come.

I fear the lesson of Earth Day.

We have sacrificed our young.

Prepare to be saved.

In honor of the birthday of the Bard,

I offer just this stanza and couplet.

From less than half a poet, my regards.

Less than half a sonnet to put up with.

So cheers to you! A writer's life is mad:

a cocktail of the good, and of the bad.

In a Spring Still Not Written Of (revised)

(In homage to "In a Spring Still Not Written Of" by Robert Wallace, who died April 1999)

I have been pushed into something new:

This poem is a cool, deep lake,

and I can’t swim.

I see you on the shore:

on elbows half-lying in the grass.

I am flailing with words,

dwindling in the distance,

unable to move or summon

the carelessly beautiful and young. 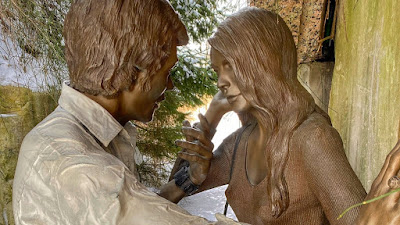 Look straight in her eyes.

I remember when we met:

and the smoke that rose.

I remember when we married:

the incense and cut flowers,

and our friends on the church steps.

You, my homeward dove.

I remember when we parted:

the ash in your hair,

the blended notes of burning violins,

and us, just us, suspended in time.

Dance me to the end of love. 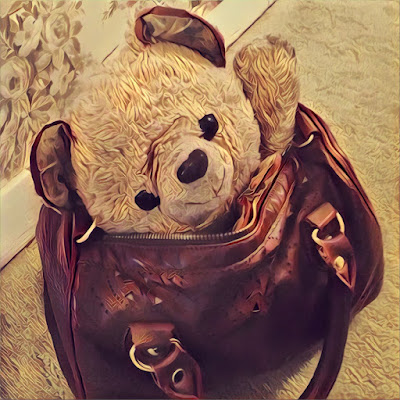 I can drive there,

our old car warning of a baby on board.

The valets are penguins, of course.

I am surrounded by pets

the dogs, just as gullible;

all the ageless hamsters

I replaced on the sly.

The one and only Spy Cat,

hero of our made-up stories,

eyes me coldly, inscrutable to the last.

I tell them all,

“I have come to take you home.”

In your bedroom, alone.

In the month of April,

I wrote all these poems

Promise me you'll come back.

*- Inspired by David Bowie's song "Life on Mars" and written on the day of the Derek Chauvin verdict. On Bowie's album "Hunky Dory," the song "Eight Line Poem" leads into "Life on Mars." The image is a favorite mural in Jersey City.

**- When my wife and I recently visited The Cloisters museum in Manhattan, we realized we had the same favorite exhibit, which we've seen on display in the past. Read more about this extraordinary rosary bead.

****- This is a "tanka," a haiku capped by two lines of seven syllables each at the end. This hyperrealistic sculpture is on display under a bridge at Grounds for Sculpture in Hamilton, NJ.

*****- This is another poem inspired by a song, Leonard Cohen's "Dance Me to the End of Love." Earlier this month, I also used lyrics from a Dylan song for another poem, so this completes my April 2021 music trilogy. 🙂

******- Inspired by a quote from Charles Yu’s “Interior Chinatown”: “There are a few years when you make almost all of your important memories. And then you spend the next few decades reliving them.” 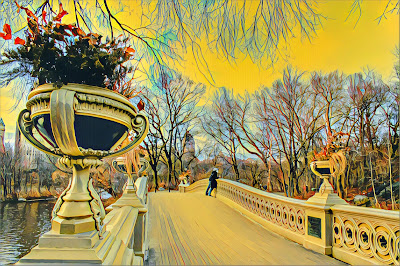 New York City can be an optical prism.

Sometimes my Google Photos folder will reflect back images of New York in black and white; other times in vibrant color. Here's a folder of New York City images, auto-stylized by Google in recent years, through 2020.

In 2021, I'm beginning to appreciate New York as a blank canvas.

Recently, I've been experimenting with a favorite photo app called Prisma. Caitlin Dewey of The Washington Post once wrote how Prisma "convincingly redraws your smartphone photos in the style of 33 famous artists."

She explained, "Prisma uses an AI technique called neural network processing to generate an entirely new image based on the one you give it. It detects patterns in your photo, and in the work of the selected artist, and uses the rules pulled from those patterns to make a third, combined image."

This month, I selected the Indian artist Thota Vaikuntam. Posted here are 9 of the resulting images, reimagining my favorite city in the early spring of 2021. 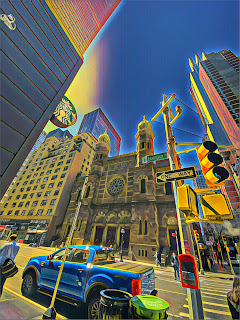 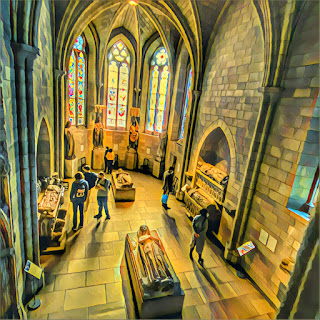 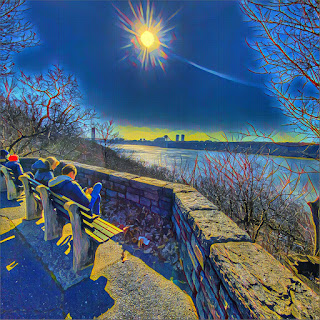 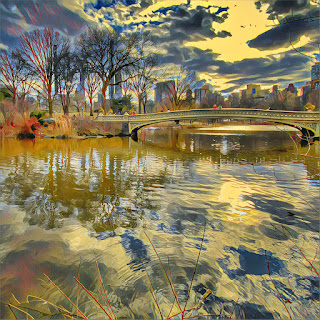 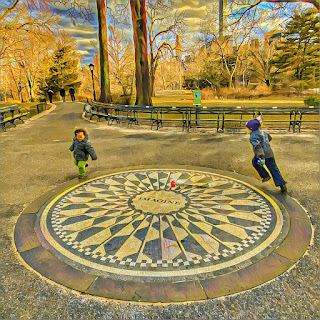 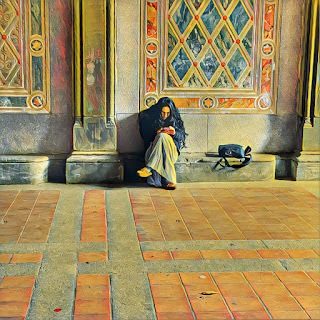 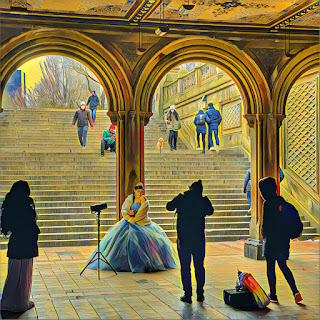 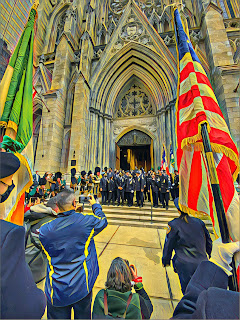 On a lark, I decided to commit to a writing a poem a day on this, National Poetry Month, following prompts posted by New Jersey poet Alicia Cook.

As she explained on Instagram, her 22 prompts for April (one for each weekday; weekends off) are based on things top athlete @tommy_rivs has said. As Alicia notes, "Tommy is fighting for his life, and his wife... is writing about it in the most heartbreaking and captivating way."

On the second week, I decided to mash up Alicia's prompts with a five-day challenge at the Shut Up & Write! site: 4/5 - "Grand Canyon in the Dark," using a SU&W Mad Lib-style structure; 4/6 - "Some Runners Are Jerks," in the form of a quatrain about "your grandmother's hands"; 4/7 - "Ever Since I was Little," as an acrostic on the topic of temptation; 4/8 - "Set up your Fortress," in the form of a villanelle; and 4/9: "Bob Dylan Lyrics," in the form of a tanka.

On this, the third week, I'm mercifully back to following only Alicia's prompts. The need to write something every day has also prompted me to explore different types of short-form poetry (the cinquain and rispetto): 4/12 - "Reverence"; 4/13 - "Be as Quiet as Possible"; 4/14 - "Until Next Time"; and 4/15 - "Whispers Before Screams."

Below is what I written so far, along with a few photos. I will try to write another 11 prompted poems this month. I'll see you on the other side.

In bed, reaching out to you,

I felt the fingers of my left hand

When I woke, you weren’t there.

Our bed was bloodless;

I grasped in time.

A bomb is made to explode.

Your job? Don't get dead.

Who has never been to the Grand Canyon,

Whose heart is the Grand Canyon in the dark

And whose skin crawls when I write poems about her.

I cheer when I finish a poem.

And cry when I start a poem.

There is nothing I want more than to write a poem Nancy loves.

But I cannot fathom her heart. Signed,

(Doggerel at Short Notice Is My Specialty)

“Some runners are jerks,” my grandmother said.

Her hands still withered; while others are dead.

It’s useless to judge, I thought in reply.

Some flowers are weeds; some oceans are dry. 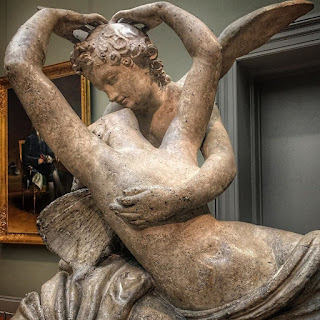 Demons have tempted me

Ever since I was little

Intangibly, by degree, year after year

Think of the angels and aurochs,

the refuge that art provides.

Our only immortality is what we express.

Defend what you profess.

Protect what you certify.

We cannot keep what we possess,

but what we write can survive.

to land in your arms.

You don’t need a weatherman

to know which way the wind blows. 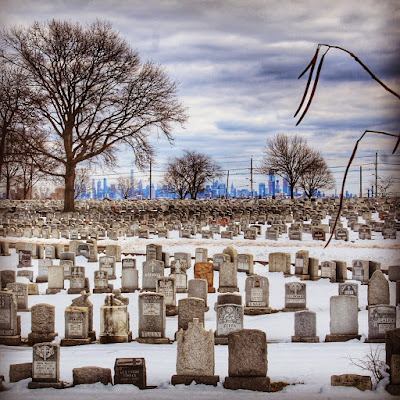 we pass in our car,

my young daughters hold their breath.

in the back seat,

I hear their exaggerated gulps of air.

In the consequential silence,

I hold my own breath,

for both the dead and the living.

I was taught to be

as quiet as possible.

I scream when I write.

The moon, "Another Month."

The whispers of snowflakes become screams at night.

It’s the sound of accumulated power.

They’ve obliterated every star in sight.

Their fury grows more intense by the hour.

Together, they herald a magical time:

Remnants of this storm will echo undeterred.

The whispers of snowflakes demand to be heard.

Attached here is a collection of other poems and images, "Greetings From 2020."
Posted by Bob Varettoni at 8:45:00 PM No comments: