What's in a Time Capsule?


I posted on Facebook today about the opening event in New Milford, NJ's 100th birthday celebration:
Of special interest to me was the unearthing of time capsules buried behind the flagpole in front of Borough Hall for the town's 75th anniversary in 1997.
What's in a time capsule from 25 years ago?
Among artifacts were aerial photos of the town, and neighbors are already making plans to update those photos today using drones. Also of interest: old advertisements and giveaways from local businesses, the Fall Preview issue of TV Guide, family photos, photos of town events, and a single-spaced typewritten page detailing the good works of three neighbors.
This was signed by Kent Raptopoulos, and it concluded: "You who are reading this in 2022 please pause and think of us for a moment and remember to be a good neighbor and build your own warm memories."
Two things especially caught my eye. 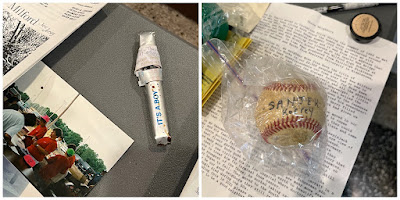 The first was a cigar case, proclaiming "It's a Boy!" It was placed there by current borough attorney Kevin Kelly after the birth of his son.
The other is a baseball signed by Sanjek Korrey.
One of the event speakers said it had been handed to her 25 years ago by a boy who said, "Here. This autographed baseball will be very valuable after I become a major leaguer."
I'm fairly certain Sanjek Korrey will not be on a major league roster when the baseball season opens later this week.
But Sanjek, wherever you are, I admire your spirit. You are an all star in my book.
Posted by Bob Varettoni at 7:12:00 PM No comments: