About My Job: A Foundation Serving New Yorkers

So many organizations demonstrated resilience, creativity, and flexibility over the past year. Our grants reflect a commitment to these essential nonprofits and providers, which are the bedrock of a healthy and equitable future in New York.

Our grants support a wide range of urgent health needs and social determinants of health across New York State. These grantees include organizations such as the Food Bank of NYC, which promotes food security for the ever-increasing number of hungry New Yorkers; the Immigrant Justice Corps, which supports access to legal counsel for low-income immigrants; Le Moyne College, which provides nursing school scholarships to students from disadvantaged backgrounds; and Veterans One-Stop Center of WNY, which bolsters veterans as they transition from military to civilian life.

Grantees will also address chronic racial healthcare disparities that have only been heightened since the onset of the pandemic in New York. These programs include a grant for the Arthur Ashe Institute for Urban Health to conduct a New York City-wide community needs assessment of social determinants of health, as well as grants and scholarships to organizations such as Hunter College, Iroquois Healthcare Association, and Associated Medical Schools of New York to promote workforce development opportunities for underrepresented groups in the healthcare profession.

Alongside these grants, we are rolling out the Foundation’s first statewide strategic program, focused on improving dental health access and outcomes in some of New York’s most underserved communities. The $5 million in grants will purchase five new mobile dental vans statewide and subsidize the expansion of mobile van services in an additional program.

During this time of transition and recovery, the Mother Cabrini Health Foundation must seize the moment not only to meet urgent needs but address longstanding inequities.

Now is the time to lay the foundation for a healthier and more resilient New York.

Though we have seen a glimpse of light at the end of the tunnel, especially with the introduction of vaccines, the pandemic has deepened longstanding disparities in healthcare access and outcomes. New York’s health and social services providers continue to need our unwavering support during this time of heightened community needs.

See more details on our grantees here.
Posted by Bob Varettoni at 10:47:00 AM No comments:

Every Picture Tells a Story 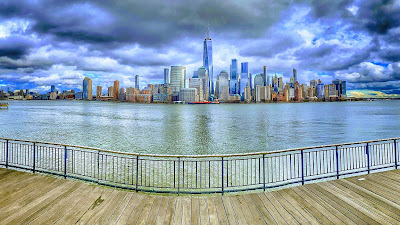 A month ago, I spent some time feeling inferior, standing in front of my mirror... A camera hung around the neck of my reflection. At least the lens cap was off.

I had met a few photography friends in Jersey City earlier that day, but I hadn't taken a single photo with my camera. It was only a prop. I just wanted to fit with the others. Also, I've found that conspicuously displaying a camera also gives me license to wander among strangers.

In the hastily captured image above, I was toying with my iPhone's "pano" setting an hour before a line of true photographers gathered along what is, in reality, a perfectly straight railing to wait patiently, cameras poised on tripods, for sunset.

Their photos were gorgeous. My image (auto-enhanced by Google Photos) is like a horror movie where an inanimate object reaches out into another dimension. At least it's my inspiration for another haiku:

knows we are alone. 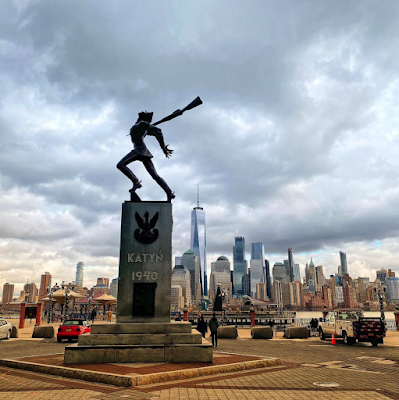 I've thought of Jersey City often this past week.

I read, for example, that an annual survey cited it as the most diverse U.S. city for the third time in the past four years.

Just a few steps back from the Manhattan skyline view, in the heart of Exchange Place, is the dramatic Katyn Memorial, a bronze statue of an impaled Polish soldier dedicated to the massacre of POWs by Soviet troops in 1940. A few years ago, a civic organization sought to move it to a more secluded area, calling the monument "gruesome."

Instead, recognizing its significance to the Polish community, the Jersey City Council voted unanimously in 2018 to keep the memorial in Exchange Place "in perpetuity." 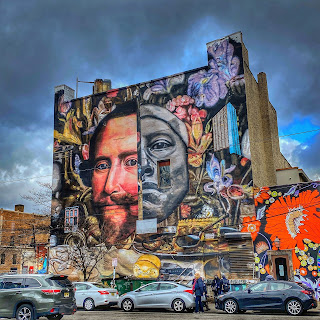 I took the above iPhone photo of the mural "Native" by the artist Gaia, and captioned it this way on Instagram:

"Finding Shakespeare, framed by dramatic clouds, on the streets of Jersey City."

Almost immediately I received a comment from the street artist himself. "Hey," he wrote, "that's Frederick Henry, Prince of Orange!"

So I corrected the caption and researched the story of Frederick Henry, Prince of Orange. Then I found the website for the Jersey City Mural Arts Program and got lost in the stories of dozens of other murals I had seen around town. 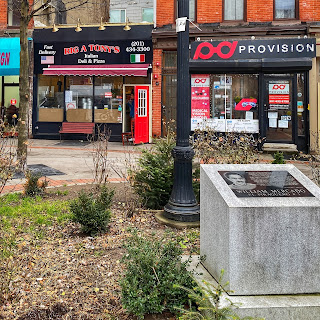 On Friday, as I do every week, I posted a photo of a New Jersey pizzeria (this one, cleverly named "Rig A Tony's") on my "Found in NJ" Instagram account. I picked a photo from just blocks away from Prince Frederick and noticed a memorial plaque outside the front entrance.

This is in memory of William Mercado, who sold piraguas (flavored ices) on the site from the time he was 12 years old until his murder at age 25 in 1994.

According to newspaper reports, William was a popular figure in the neighborhood, and his snow cones were a favorite among children. To this day, his mother tends the flowers here. His brother, George, runs a flower shop nearby. 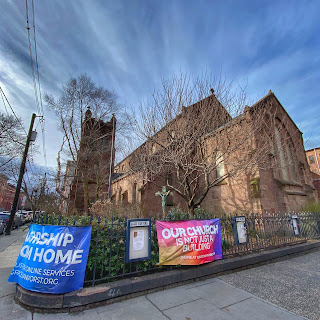 And now it's Sunday. As I do every week, I'm posting a photo of a New Jersey church on Instagram.

This is Grace Church Van Vorst, an Episcopal church on Erie Street in Jersey City.

"Our church is not just a building," reads one of its outside banners. I've discovered that, built in 1853 and listed on the National Register of Historic Places, Grace Church has been a haven for artists, musicians, people experiencing hunger and homelessness, the LGBTQ+ community, and anyone who might not fit in elsewhere. You can learn more here.

Better, you can enjoy the musical performances of its four-hour fundraiser, held yesterday on Facebook. The church surpassed its $8,000 goal, but the page has links if you wish to contribute even more.

Every picture tells a story, don't it?

This is why I love photography. There's more to it than the craft or the aesthetic. It stops time.

An old Rod Stewart song is playing in the background as I write this. I remember the lyrics from high school.

"On the Peking ferry, I was feeling merry..."

It's a silly song, but it's full of life and energy.

Like the best photos by my favorite photographers, it focuses my thoughts on a moment I can savor, while everything else passes in a blur. 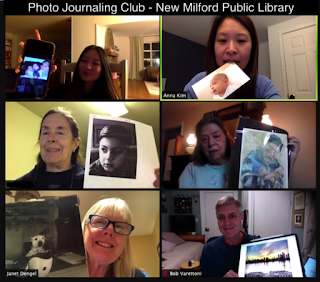 Another Wednesday night, another Zoom, another wistful meeting of the Photo Journaling Club of New Milford, NJ.*
This week, the club inspired me to write three haikus and a poem in free verse. The haikus are about people whose lives intersect only in my thoughts:
The poem is about a recent attempt to clean out my garage. With apologies to Marie Kondo, not everything abandoned is clutter.
Lucky for me, I can tuck things away here on the Internet, and they all but disappear into thin air. If you are interested in other recent poems, I hid them here last week. 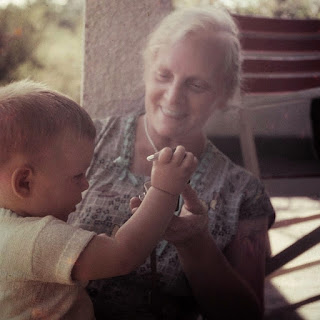 This is my Nonna.
Dad's mom, who taught me to pray.
Her smile, heavenly. 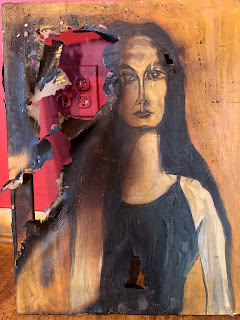 An artist creates
dark beauty from depression,
then sets it ablaze. 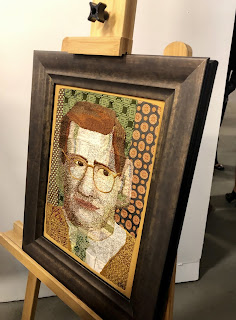 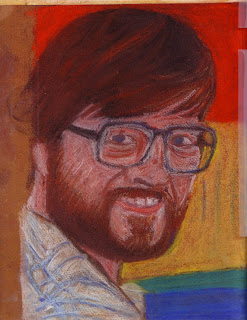 Every Work of Art Stops Time

I was surprised to find myself
among the papers I was about to throw out.

You had drawn this many years ago,
and I had forgotten.

I am comically disguised as myself,
in beard and chunky glasses.

I am Dorian Gray in reverse,
diminishing every day in real life,
with a hidden portrait of when I was whole.

Your hand-made cardboard frame,
sandwiching a plastic sheet to protect the surface,
had come undone.

Stuck to a rough edge,
fossilized in scotch tape,
was the thing that froze my heart.

A single strand of your blonde hair.

---------
* (Recent post from my local library): Since last March, the New Milford Public Library went virtual and continued so many wonderful online programs — storytimes, exercise, book clubs and so much more. Anna Kim, Adult Services Librarian, came up with a unique offering, a virtual Photo Journaling Club for high schoolers and adults. She enlisted the help of New Milford resident, Janet Dengel who has a background in writing and teaching.
Now into the club’s third 7 week session, the group has welcomed adults, retirees, mother/daughter writers, and high schoolers. They write about photos from family albums as well as photos in their phones. The topics have included family, pets, holidays, architecture, nature and more. Through this virtual program, the New Milford Public Library has given people a creative outlet during this challenging time, a way to get to know our neighbors and join generations together, and an opportunity to capture our life stories.
Posted by Bob Varettoni at 1:03:00 PM No comments:

And Now for Something Completely Different...


I boldly proclaimed last year that I would stop dwelling on the past -- and I've profoundly failed at this.

One pre-pandemic New Year's resolution was that I wouldn't post as many memorial tributes here or be so self-absorbed about the past.

I do try to keep my family out of the things I post, primarily to protect their privacy. Well, except for Mom. She likes when I post about her. 😊

But the simple fact is: It's hard to write about the living.

If binge-watching "The Good Place" (highly recommended) while staying at home during a pandemic taught me anything in 2020, it was that people change and grow. My perception is unfair to the reality of anyone I would write about.

I recently accepted a Facebook friend request from someone who has lived in Mom's neighborhood for many years. The next day Facebook suggested a friend of my new friend as a connection for me. It was someone who had bullied me in grade school. I didn't accept the recommendation, but I looked at the bully's profile. It seems he's had a good life.

So what do I know? People don't ever stay the same. Only words on a page are immutable.

I find that immensely comforting.

Here are my words: Attached here is a collection of my poetry over the past year. It's titled "Greetings From 2020," a collection of nine (mostly wistful) poems, illustrated by my photos. Below is a recent sample, "The Mystery of 3."
It's something different from me anyway. I hope you enjoy it -- and forgive my Monty Python reference in the title of this post.
I'm feeling inspired today. My hovercraft is full of eels.
---------

I have evidence of this.

Exhibit A: The Oculus' random crowd.

a couple with a baby carriage,

a man rushing to join friends.

What is this magnetic pull?

The sturdy balance of a three-legged stool?

Or merely the nature of things?

that no one has