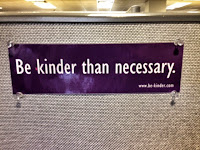 “Wonder” is a wonderful story, with great and uplifting messages (“Be kinder than necessary!”). It's a book I highly recommend for young readers. My only “critical” observation as an adult reader: this is definitely a young-adult book written for young adults.

The point is, I’ve read, and more enjoyed, other YA fiction that is more nuanced. In “Wonder,” you get sections of trite observation (every housekeeping instruction provided over a loudspeaker at a kid’s first sleepaway camp), and black-and-white conflict resolution.

Still, the author is clever – and the story is (thankfully) told from multiple (non-adult) viewpoints. The point-of-view of the main character’s sister is unexpectedly honest. Suspending disbelief, I was also won over by the guileless character of Summer, and it was refreshing to read an unironic account of a supportive family life.

It makes me sad to think that “Wonder”’s setting in Manhattan’s “North River Heights” really might be mythical in more ways than one.

I also felt guilty about thinking this book was not “adult enough” in tone, so I recently purchased a copy of “Charlotte’s Web” on audible.com – if only to hear E.B White read his own children’s story. It’s been many years since I first read it.

What a treat to listen to! Despite having talking animals in a land that, unlike “Wonder,” has little in common with where I live and society today, “Charlotte’s Web” was genuinely enthralling. Go figure. I attribute this to the extraordinary craft of E.B. White’s writing. If R.J. Palacio doesn’t measure up in this regard… well, she’s in good company, because I can’t think of anyone else alive who does.

I do suspect, though, that R.J. Palacio’s novel will age well. It has some timeless themes, and you should read it yourself. It's likely to be better than the upcoming movie, which, from previews, looks to be even more sanitized.

On the opposite end of the spectrum is a decidedly unsanitized movie I re-watched after many years: “MASH.” It was so epically bad I felt compelled to post my first IMDB review after viewing it. I just wanted someone, someday to know that this was where I drew the line between good and bad, evergreen and rotten:


When I saw this movie in the '70s, I was intrigued by it. It came out around the time of the book "Ball Four" (and, in contrast, the movie "Patton") and all made me think. In fact, I saw this movie on the same bill as "Patton." Seeing this movie last week (August 2017), I was horrified by it. It's truly awful: mean-spirited, condescending and misogynistic. I think it might even have spread seeds for the anti-left feelings (and the resulting election of Donald Trump) for many people in my generation.

I'm still a liberal, but I can only hope I've aged better than this movie.

I should have added that the film was racist and homophobic, but, you know, I generally try to keep things upbeat. I try to be kinder than necessary.

And… I get it: It was a breakthrough film in a different era. Robert Altman was a genius. It had adult themes (it was even initially rated X). The real villains are not the protagonists but those who perpetrated the background war. 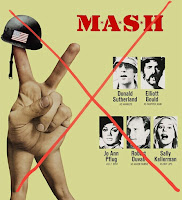 I get it – and I’ve also posted on the how-liberal-hate-fueled-the-Trump-election theme before.

I get it, and I’m still not going to waste another second of my life on "MASH."

Perhaps you have two hours to kill this upcoming Labor Day weekend, in these waning hours of civilization before North Korea is provoked into dropping the Big One on Trump Tower in Midtown Manhattan.

Before you consider spending those two hours watching "MASH," here’s my suggestion: Spend the first hour reading an E.B. White essay called “Here Is New York,” and spend the next hour going for a walk with someone you love. 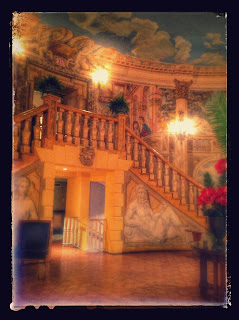 Passing through the iconic Rotunda Room at The Pierre for my daughter's 21st birthday dinner in November 2013, I awkwardly snapped a photo with my cell.

Thus began a long, strange relationship with me and Google Assistant, which has since automatically stylized a number of photos I've taken in New York City ever since.

I don't know what about New York makes the algorithm in a Google Photos folder want to constantly filter scenes from the city -- and so often in black and white, as if my life were a Woody Allen movie.

You can view these filtered photos in this shared folder.

I've taken thousands of photos over this time, but it's always the ones in New York that Google automatically chooses to filter. It must be a city that enchants even our new robot overlords. 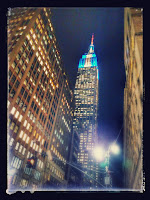 The thing is -- except for the black-and-white images -- I don't think the filters add romance or glamour or perspective to the real thing.

New York is an extraordinary place, with a singular style... and even on Google Assistant's best day it can't match the inspired opening of "Manhattan," set to George Gershwin's "Rhapsody in Blue."

I adore New York; I romanticize it all out of proportion. I am especially comforted by the thought that it will always be bigger than Google.