Harold Burson, All the Way to Memphis

The center of the PR universe shifted nearly a thousand miles southwest this past week.

On July 23, Harold Burson, age 98, left his adopted home of New York City to return to his boyhood home in Memphis.

Burson is "The Godfather of PR," according to this "Daily Memphian" profile. He's also the B in the global communications agency BCW (Burson Cohn & Wolfe).

Back in Memphis, he is still working, although "enjoying a pace that's just a little bit slower than that of Manhattan," as he said in a statement.

Luckily for us in New York, just days before he left, The Museum of Public Relations invited local PR students to spend time with him in connection with the opening of its Harold Burson exhibit.

About 100 students, interns and professionals heard Burson's insights gained from his handling of historic PR cases. We also heard anecdotes from his life as a journalist, including his American Forces Network coverage of the Nuremberg Trials after World War II.

And -- thanks to Shelley and Barry Spector, founder and co-founder of the Museum -- these resources are available online. The Museum's Facebook page features a live-stream of the entire July 8 event and an edited, downloadable repost with better audio.

In addition, here are great recaps of the event and more background information about the Museum and Burson exhibit on O'Dwyer's (which also calls him "The Godfather of PR") and PRWeek (including a touching thank-you tribute by Kevin McCauley).

I've posted my own photos of the event in a Google Photos folder, and I want to thank Kathy Rennie who accompanied her PR class at New Jersey City University, for the photo posted here.

A Death in the Family

Anne was my mother-in-law, and the location of her home is a mystery, depending on your perspective, her faith and the transcendent power of baseball.

Having lived almost all her 91 years in Nutley, Anne had spent years as an applicant for an apartment at the residence, where a never-dwindling waiting list made it seem as if Marian Manor was a magical place where everyone lived forever.

Still, she persisted. She settled into an apartment there more than three years ago, but her health failed soon afterward and her memory began to decline.

With 24-hour care from an aide and daily visits from her surviving children – including my wife Nancy – Anne was well-cared-for and comfortable.

That is, until these last weeks, when she could not be comforted.

Instead, she was restless. She was constantly telling her children that she wanted to go home.

On the surface, you’d think “home” would mean Nutley. But the Cullinane family home had been sold with Anne’s move to Marian Manor, and she seemed to understand that.

Perhaps, I thought, home was “heaven.”

Anne had a deep Roman Catholic faith. It sustained her when her husband, a Newark fireman, died of cancer at a young age, leaving her to care for six children. She simply learned how to do things for herself – drive a stick shift, type and operate a key punch, and eventually work as a tax accountant (she was always especially good with numbers) – in order to provide for her family.

Later, after her retirement at age 72, Anne’s faith sustained her when both her oldest daughter and oldest son died prematurely, also from cancer.

Still later, her faith sustained her during the long days at the end of her life when she could no longer do things for herself.

If only she could go “home.”

In the end, I sometimes accompanied Nancy as she visited with her mom, eavesdropping on their familiar, intimate and sometimes repetitive conversations.

In the very last days of Anne’s life, she and her daughter talked about baseball. 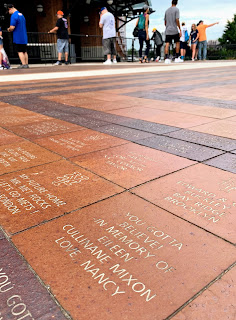 Anne was a lifelong fan.

She used to follow the New York Giants, and as young teens she and her girlfriends would often take the bus from Nutley to the Polo Grounds to attend games. When the Giants left town, she became a Mets fan.

Just as fathers form bonds with their sons over baseball, Nancy became a Mets fan as a girl as she bonded with her mother.

Nancy still recalls with some bitterness that she was too young to attend a Mets game with her older sisters at the Polo Grounds before Shea Stadium opened in 1964. After the death of her oldest sister Eileen, Nancy bought one of Citi Field’s first commemorative bricks for her. Its inscription is the rallying cry when the Mets won the 1973 pennant: “You Gotta Believe!”

During the last few weeks of Anne’s life, she entered hospice care – and Nancy made a daily journey to Caldwell to visit her mother. After I ended a 34-year career at Verizon at the end of June, friends urged us to take a celebratory trip – but I could not take Nancy far from her mom. 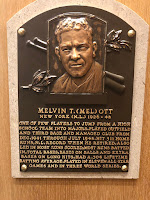 Instead, we went the next day, a Saturday, to attend a Mets game at Citi Field, where they celebrated the remaining members of the 1969 team that won the World Series. Nancy had remarked that, with their dad sick and Anne struggling to raise young children, that the time before 1969 had been particularly hard for the Cullinane family.

“The 1969 World Series was one of the first, best, good things to happen in our lives,” she explained to me before we drove to Citi Field on June 29. “This celebration is the one Mets game I really wanted to attend this year.”

The next day, Nancy agreed to drive up to Cooperstown with me – our one night away from home – where we visited the Baseball Hall of Fame.

But the day after that, Nancy was back at her mother’s side in Caldwell, showing her cell phone photos of the reunion ceremony and our brief road trip. 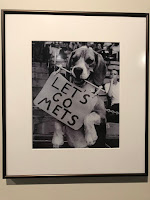 Her mother brightened when Nancy showed her a photo of Mel Ott’s plaque at the Hall of Fame. Anne recognized her favorite baseball player right away.

Anne also fondly remembered Tom Seaver. When Nancy asked if she remembered the name of the beagle who had been the Mets mascot at the Polo Grounds before Mr. Met arrived on the scene in 1964, Anne said, “Of course, his name was Homer.”

And when Nancy showed her photos from the 1969 celebration, Anne recognized the part-time player Rod Gaspar – now gray-haired and 73 years old – from his jersey number.

As Nancy and her siblings work to settle Anne’s affairs, my wife thought of one last, appropriate gift for her mom, harkening back to the one for her sister Eileen.

“I want to buy a memorial brick for her at Citi Field,” Nancy said.

I think this is a wonderful idea, but I have no intention of telling her how to inscribe it.

Anne raised a strong-willed, smart, independent and loving daughter. One in her own image.

Anne lives on through all of them.

Still, I’ll let you know what I think an appropriate inscription would be for the memorial brick. It speaks to the things that attracted Anne to baseball: its rituals and numbers and drama and escape. Its one ultimate goal.

The brick would be from her entire family, and it would state simply this: