Words to Live By, Source Unknown 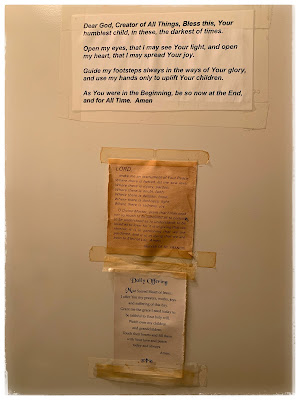 Visiting Mom yesterday, I studied my face in the mirror of the downstairs bathroom, which was almost exclusively used by Dad.

Earlier in the week, I had posted a memorial here about my father on what would have been his 89th birthday.

As I studied my face, I wondered when I had gotten so much older. If I die the same age as Dad, I have less than 10 years to live. Then I wondered how it was that the older I have gotten, the less things make sense.

In a flash of inspiration, I opened the medicine cabinet.

They were still there: the items Dad had taped to the back of his mirror.

The oldest item, yellowed... something I remembered from childhood... was a copy of The Prayer of St. Francis.

"Lord, make me an instrument of Your Peace," it begins.

I've learned, over the years, that there's no evidence St. Francis of Assisi ever wrote or said a word of this. However, it's become engrained in popular culture, and President Biden even quoted from it in his first words after the Electoral College confirmed election results last month.

No matter. It's a beautiful prayer, with a beautiful sentiment. I'm sure St. Francis would have approved.

Also, you have to love how Dad fixed the typo in the word "console."

But Friend Internet can perform magic. I found those exact words in an excerpted Feb. 4, 2003, article in The Sun tabloid about a visitation Pope John Paul II purportedly received from the Virgin Mary. It's hard to disentangle the wild story, but the apparition likely related to the pope's release of the text of the mysterious Third Secret of Fatima in 2000.

According to the article, the last time the mother of god visited the pope here on earth, she said that "by accepting this prayer into your heart, you will be assured of a place in Heaven."

I'll reserve judgement on that one. But if reciting those words indeed got Dad a ticket to heaven, I'm all for it.

---------
The simple prayer card taped to the bottom is the most haunting.

I can't find those exact words anywhere, although I see hundreds of variations all over the Internet. It's just a typical morning prayer.

It haunts me, though, because I know why Dad saved it and attached it to the back of his mirror so he could think about it every day before shaving.

It's all about the last two sentences of the prayer; the ones that weren't about him:

"Watch over my children and grandchildren. Touch their hearts and fill them with Your love and peace, today and always."

I'm an ordinary person, living an ordinary life. Still, my heart has been touched by love and peace, today and always. Now I know why.

Dad said a prayer for me and my sister every day. And for our children.

A Dozen Images of Dad


Dad knew quite a bit about bad poetry.

While cleaning out the garage this past summer, I found a folder of long, badly-rhymed "odes" that Dad evidently wrote about work and Navy Reserve colleagues as anniversary or retirement gifts.

He also knew quite a bit about good poetry. Mom still fondly recalls how he used to recite Shakespeare to her.

At his best, like all of us, he had the soul of a poet. He worked for the telephone company; he wanted to be an architect.

Mom and I still talk about (and sometimes "to") Dad. It would have been his 89th birthday today, but he died when he was 73.

There's no "Ode to Dad" in the folder I found in the garage.

These fragments will have to do:

2. A 13-year-old sandlot pitcher snapping off a tightly spun sinker

4. The smell of Old Spice and hair gel

7. A round stain of bourbon on the counter of a bar

9. A 32-year-old storming a convent to defend his son

10. The intricate paint job on a precision plastic model of the U.S.S. Midway 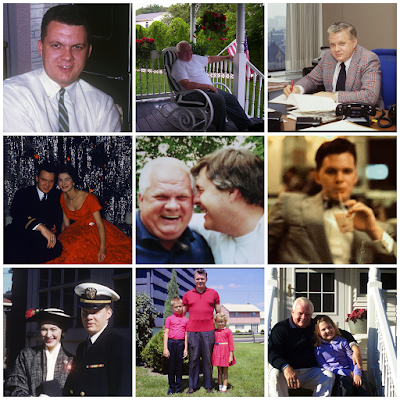 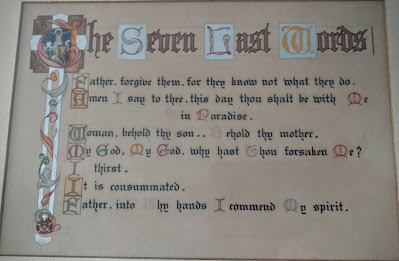 A Visit to Eagle Rock, With a View to Oz 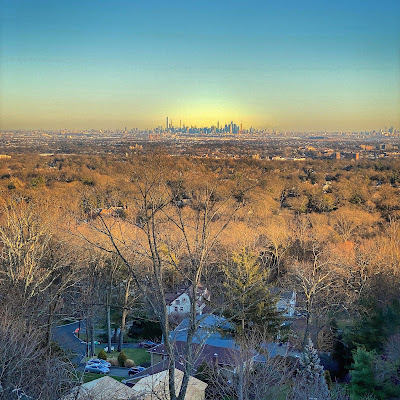 On a clear day, you can see Emerald City.

Above is the view from Eagle Rock Reservation. More specifically, it's from the lookout next to Highlawn Pavilion, a restaurant/hall on the ridge of the Watchung Mountains, in the midst of a 400-acre park triangulated by Montclair, Verona and West Orange.

It's the site of Essex County's September 11th Memorial.

Here are some photos of the memorial items from a recent visit: 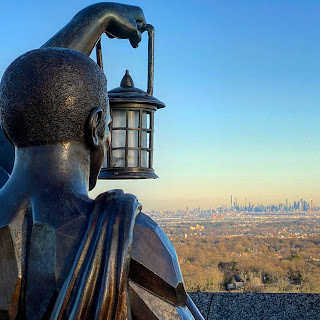 Above is "Remembrance and Rebirth," a bronze figure lifting a lantern to the former site of the Twin Towers. 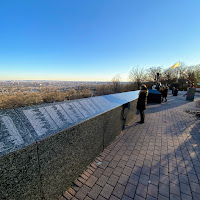 To the left (with caption information from the brochure linked above and published by the Essex County Department of Parks, Recreation & Cultural Affairs) is the 120-foot granite "Wall of Remembrance." Engraved there are the names of the 3,000 people who lost their lives in the September 11 attacks, including those aboard the four airline flights.
The three memorial artifacts below are:
Freedom - An 8-foot, bronze, life-size eagle with its wings spread in full flight.
Gabriella - A life-size bronze sculpture of a young girl holding a teddy bear. She represents the more than 1,000 children who lost a parent, brother, sister, grandparent or other family member.
Firefighter Helmet - On a short pedestal to the left of Gabriella is a replica FDNY helmet engraved, "with deepest gratitude from the people of Essex County, New Jersey, in memory of the 343 New York City Firefighters who sacrificed their lives in the line of duty on September 11, 2001." 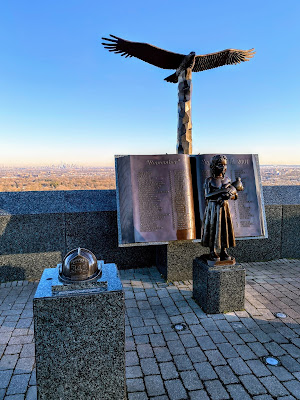 Finally, here's a World Trade Center artifact that is preserved at the site: a 7,400-pound steel and concrete portion of the foundation. Behind that is a newer statue saluting the search and rescue dogs of 9/11. More than 350 Daschunds, Golden Retrievers and other dogs were called into action that day. 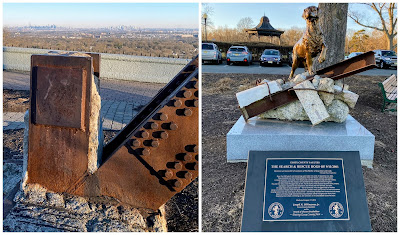 ---------
Of course, Eagle Rock is also the site of some stunning views of the New York City skyline.
Those aren't hard to stumble across in New Jersey.
When I posted the photo at the top of this page to "Found in New Jersey" on Tumblr, a friend (I don't know his real name, everyone seems to be anonymous there) commented: Pete Hamill wrote that when he stared dumbstruck at Manhattan for the first time in his life, his mother said, "Peter, you've seen it before. It's Oz."
Traveling around New Jersey, this skyline can appear suddenly and magically: driving over a bluff heading south on Route 17 past Ramsey, or north on the Turnpike approaching Newark, or east on Route 3 in Nutley or on Route 80 in Hackensack.
I also have favorite destinations to see the city in the distance: Weehawken and Jersey City, Fort Lee Historic Park and Garret Mountain Reservation in Paterson.
Sometimes, New York's skyline appears unexpectedly. On my first visit to Gateway National Park, I was surprised to see the city to the north since it's a more than 50-mile drive from Sandy Hook Beach to One World Trade Center, the heart of Ground Zero.
Stumbling upon the view, I felt a kindred connection to what F. Scott Fitzgerald wrote about the Dutch who sailed down the Hudson River from the opposite direction centuries ago.
In January 2021, the copyright on "The Great Gatsby" has expired, so I end this post with a clear conscience as I quote some favorite lines:

As the moon rose higher the inessential houses began to melt away until gradually I became aware of the old island here that flowered once for Dutch sailors’ eyes — a fresh, green breast of the new world. Its vanished trees, the trees that had made way for Gatsby’s house, had once pandered in whispers to the last and greatest of all human dreams; for a transitory enchanted moment man must have held his breath in the presence of this continent, compelled into an aesthetic contemplation he neither understood nor desired, face to face for the last time in history with something commensurate to his capacity for wonder. 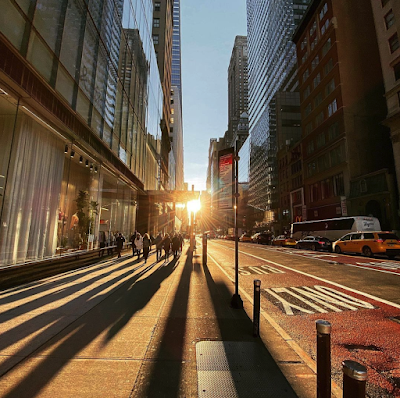 In January, walking to work in Manhattan with the sun in my eyes. A video loop of the same basic image shows the Ghosts of 2020 Future.
In February, a post-Valentine's Day trip to Asbury Park, followed by a post-quarantine visit in July, again haunted by sunrise shadows. 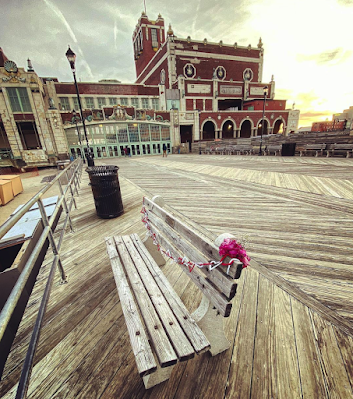 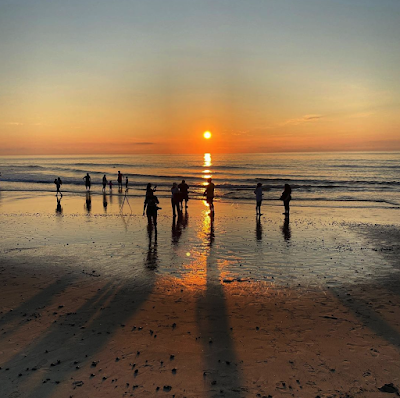 In March, I saw Manhattan for the last time in months... first, from a final plane trip at the start of the month, then walking to work past Times Square on March 13. 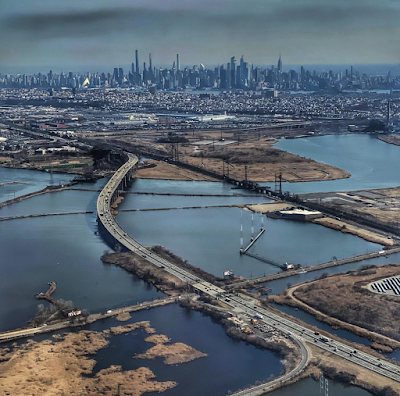 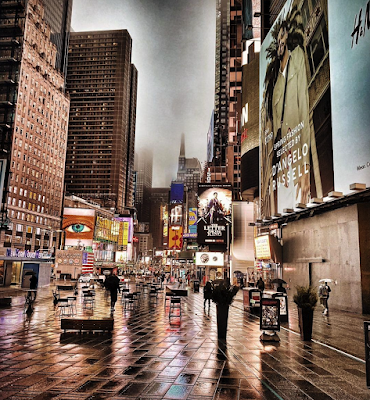 In April, it snowed in my hometown in New Jersey, and deer roamed the suburban streets during lockdown. 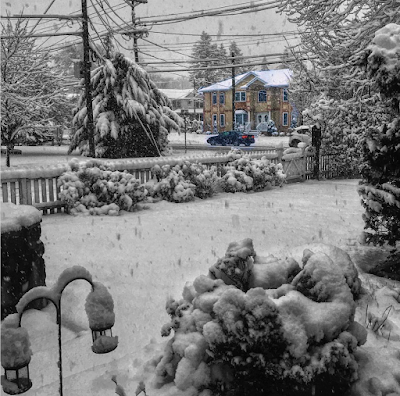 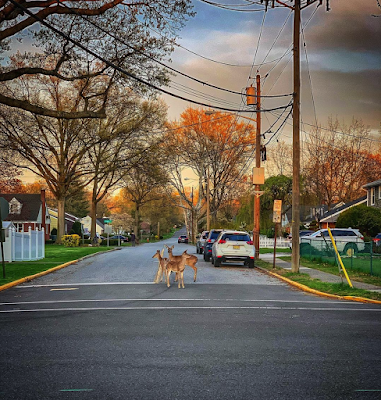 In May, I needed to drive into Manhattan to run an errand for Mom. I didn't get out of my car, except to shoot this photo of St. Patrick's Cathedral. Later, I stopped on the way to Mom's house to sneak a photo of the Great Falls in Paterson. 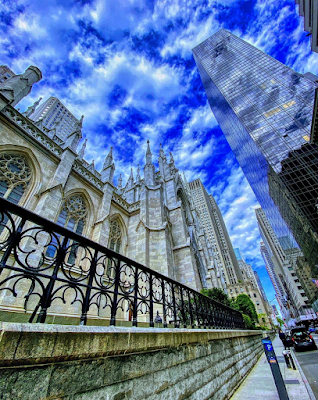 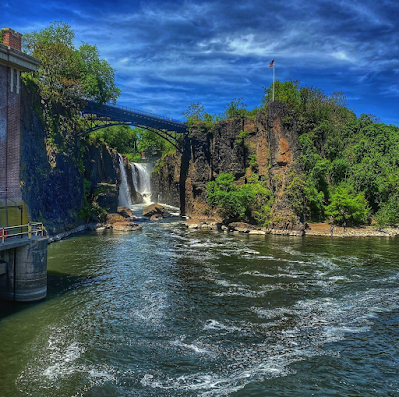 In June, I saw my youngest daughter for the first time in months. It was a foggy night on the Seaside Heights boardwalk, and I stopped when she didn't realize it so I could capture her image before she disappeared into the mystic. 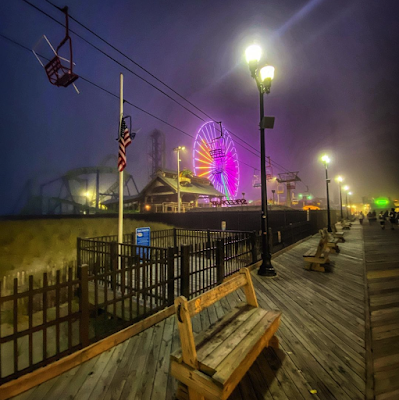 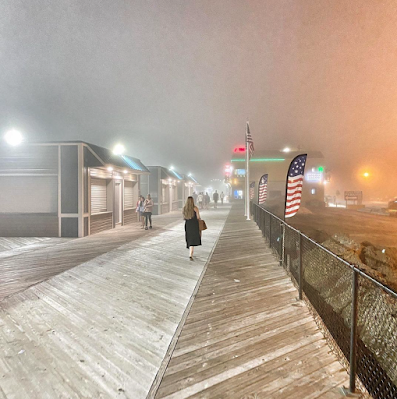 In July, I met photography friends, socially distanced, at the Empty Sky Memorial in Jersey City. 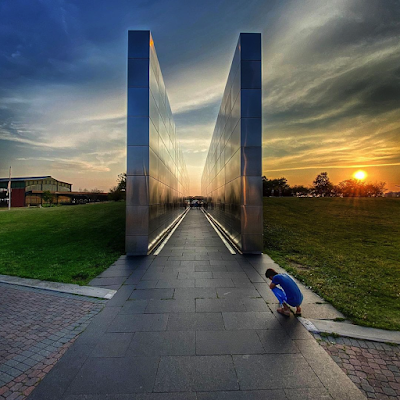 In August, I visited Fort Lee Park with my wife (and returned in October for a different perspective from the Palisades). 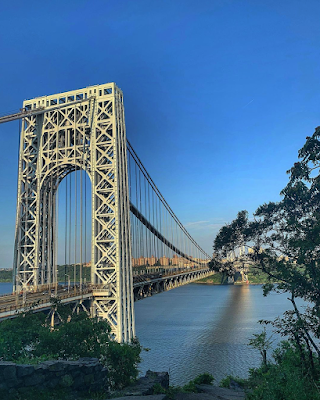 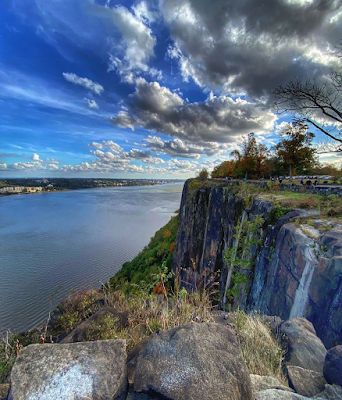 In September, I went for a walk with my oldest daughter in Saddle River Park, and we watched birds already heading south. 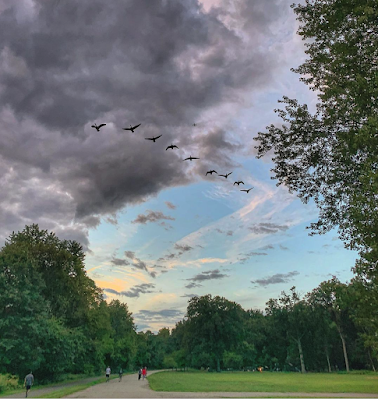 In October, I was back at work in New York two days a week, enjoying the office view and returning to find Times Square decidedly not a "ghost town." 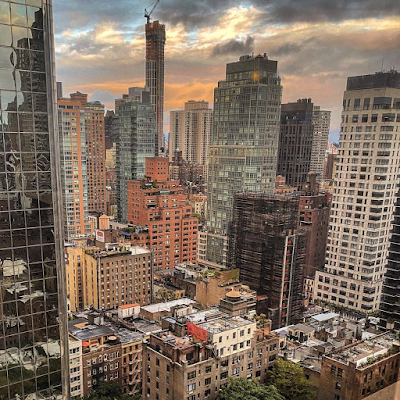 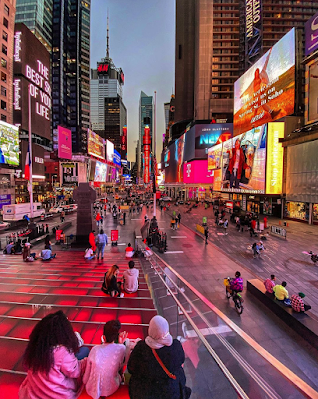 In November, I stopped to take a photo in Bloombury, NJ -- and found more shadows on the face of this church. 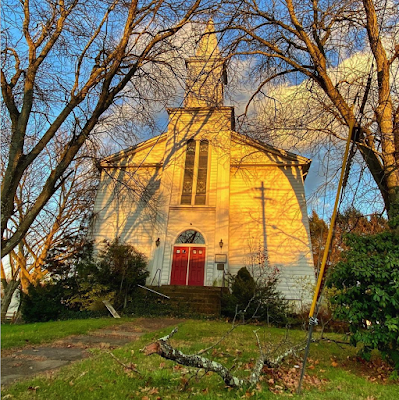 In December, a friend who hasn't been able to return to New York asked for a photo of the new skyscraper, One Vanderbilt, in the season's first snowfall. 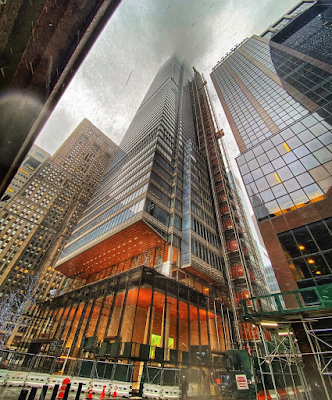 Finally, after Christmas, I returned to Asbury Park to take a photo of 2020's last full moon... 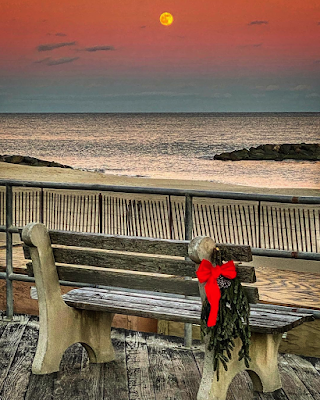