The Evolution of a Poem, Decades Apart

As I rooted through old boxes to clean out my garage during this pandemic lockdown, Neil Young's song "Vacancy" began to play on Sirius XM.
I lifted my head.
I didn't recognize the song... surely, it was new. Yet something about it seemed different than recent Neil Young songs.
His voice was immediate and clear, and the opening riff and beat seemed straight from the mid-1970s, reminding me of his first famous band, Buffalo Springfield.
"That's extraordinary," I thought, given that Neil is now 74 years old... but not entirely surprising, considering his continued passion. Witness this performance of "Mr. Soul" just nine years ago.
Then the DJ explained that "Vacancy" was a song originally recorded in 1975 but released only last month as part of the "Homegrown" album.
How does aging impact creativity?
I admire the art Paul Cezanne produced toward the end of his life. But his career was rare, almost magical.
In the world of music, Bruce Springsteen's "Thunder Road" is a favorite song of mine and my wife, Nancy (just another reason I love her). I think, and Nancy agrees, it's a song he only could have written when he was young. It's about beginnings, an invitation to a journey that can't be replicated later in life.
Could he write a better song now that he's 70? Perhaps, because Bruce is Bruce. Still, it would be a different song by a different Bruce. And, sigh, "different" is different than "better."
Steve Jobs sometimes compared two versions of Bach's "Goldberg Variations" performed by pianist Glenn Gould early in his career in 1955 and as a mature artist in 1981. Jobs considered the later version more nuanced and soulful.
I wonder.
---------
Cleaning out my garage has been a revelation: Boxes of old photos (see Saturday night's post) and old papers. I found a folder of writing assignments I had submitted many years ago in classes taught by a Notre Dame literature professor, the talented poet Sonia Gernes.
Reading my poems decades later, my writing voice, like Neil's singing voice, seemed more immediate and clear in college. Clumsy too. Much of my early writing seems creepy and obsessive when I was shooting for "tender and evocative." That probably explains a lot about my past love life too. 🙂
I also, apparently, thought I knew everything. Despite helpful and insightful comments made by Professor Gernes, I never (except once) tried to revise my poems.
I will now.
In fact, I have to: I told friends in a local photo-journaling class I would, and I feel I owe it to my social media friend, journalist Laura M. Holson, who has often written about embracing creativity, especially as we age.
Here's a poem titled "Scenic Overlook," in which I tried to describe the arc of a relationship in terms of someone who exited a highway to admire a panoramic view.
You can see my struggles in the "found poem" photo. I didn't have a panoramic view of life when I was 20. The original read like this:

Scenic Overlook
In the distance, in the
break in the clouds on the horizon,
I can see laughter.
A sunset.
I had forgotten about that.
It's an old story --
separating the forest from the trees.
It seems to me now that there are
a lot better places I can be than
standing here, surveying my past,
when the only thing within my reach
are the cold, damp car keys in my hand.
I have a plan.

Don't get me started on the cliches and sloppy language: "separating the forest from the trees... it seems to me now that there are a lot better places I can be..."
However, I still like the idea behind the setup of the poem. I'm not throwing away my shot.
Here's a re-do, written last night during a heatwave in New Jersey:
Revised in 2020

This is a dangerous place to stand.

in the descending dusk on the highway's horizon,

I see a house fly

alight on your thigh.

I didn't pull over for this. Despite all signs,

I find it a dizzying view.

The fly rubs its hands and plots its next move.

A dismissive twitch of your flesh shoos it in a flash.

as cars on Route 80 flee to the west.

I look to the east.

Behold this precipice: these wounds, dark and deep.

Alone on this road, alone in my bed,

I still watch you while you sleep.

This is a dangerous place to stand:

Cliffside in Paterson, in the descending dusk.

Past the highway below,

in the remote city skyline at my feet,

I see a house fly alight on your thigh.

The signs didn’t warn me of this.

I find it a dizzying view.

The fly rubs its hands, obsessed, plotting its next move,

until shooed in a flash by a dismissive twitch of your flesh.

as cars on Route 80 flee to the west.

I look to the east.

Behold this precipice, these wounds, dark and deep.

With a breast of the new world eclipsed on the horizon,

I still watch you while you sleep.

Dad in Barcelona, Photos From 1955 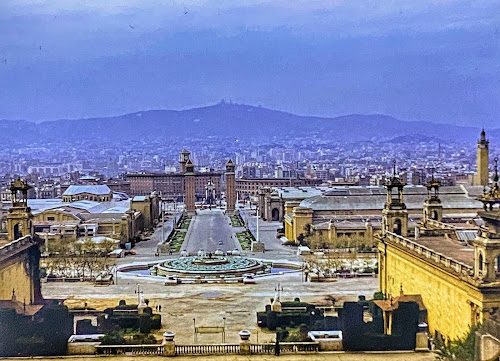 On special Saturday nights when I was growing up, Dad would retrieve a heavy green slide projector from the crawl space (our suburban housing development was built over swamp land, so no one had a basement).
He'd lug it upstairs and assemble a viewing screen in the living room. He'd pull the screen down, like a giant window shade, then load a carousel with 35mm slides and attach it to the projector. When he flicked the ON switch, it emitted a loud, constant whir. You could see airborne house dust floating in the funnel of harsh white light between the projector and screen, and every fleck of dust on the lens when the screen was blank.
When the screen wasn't blank, it was magic. It was slide show night.
Dad took hundreds and hundreds of slides, almost all of the family. The four of us (Dad, Mom, my sister and me) all had our favorites. We had many laughs on special Saturday nights, gathered in the living room, as Dad narrated every photo in every carousel.
Or what I thought was every carousel. 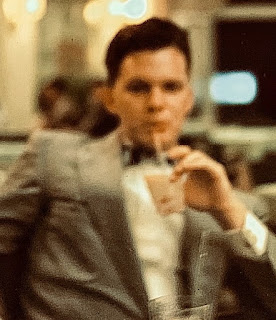 Recently, in cleaning out my garage, I found a new stash of Dad's slides -- ones I had never seen before -- from his days traveling the world with the Navy, before he was married.
That's young, blurry Dad in the photo here, channeling a young Hemingway abroad.
So tonight, just another Saturday night in New Jersey, I made a Powerpoint presentation from one set of Dad's slides, a trip to Barcelona.
"Barcelona" is a running joke in my life because several friends have randomly recommended that I visit there over the years. According to the small yellow box of Kodaslide Mounted Color Transparencies, Dad visited there 65 years ago, in 1955.
He wrote descriptions of each slide in meticulous small handwriting, and I voice those captions in the presentation below.
Several photos depict what Dad describes as the Cathedral of the Holy Family, which was then under construction. Of course, he was referring to La Sagrada Familia, the famous church designed by Antoni Gaudi, which has stood unfinished for more than a century... and is still unfinished today.
That tells me all I need to know about Barcelona. I think my friends are right; I should follow in my father's footsteps and visit someday. It sounds enchanting.
Posted by Bob Varettoni at 11:16:00 PM No comments:

There's a storm brewing on this hot, humid summer afternoon in New Jersey.
I'm just in from the garage, where I'm finally sorting through boxes and boxes of old papers I've saved.
I had intended to post here about "lessons I've learned" in the year since I left my longtime job at Verizon. Last year's post has been the most widely read on this blog, and in it I incidentally mentioned a woman named Eileen Vodola.
Upon further review, all the "lessons" I've jotted down since last July were aphorisms. So I gave up on drafting this post, joined my wife on a visit to Immaculate Cemetery in Montclair, then began sorting the mess in my garage.
The only life lesson I could pass on with any certainty until that point was: "I've got too much stuff!"
And then I found this...
This is a true life lesson, dated exactly 35 years ago today: a single-page, single-spaced typewritten copy of my Dad's eulogy for his best friend at work.
I know that Dad gave me this piece of paper 35 years ago precisely because he knew that I would keep it. I am my immigrant family's version of a Griot, the storyteller of an African tribe whose life's purpose is to pass on ancestral history.
Yikes! That was a loud clap of thunder!
It's Dad telling me to get to the point.
Here's what he said in eulogizing his friend and co-worker, Eileen Ferrari Vodola:

This woman, who will always live in our memory, was indeed unique. As a daughter, as a niece, as 'Big Aunt Eileen,' as a co-worker, as a friend -- every life she touched was enriched by her understanding, by her compassion, and by her generosity.
To those who believe, as I do, that the soul is eternal and that death is merely the passing to a higher plane of existence, Eileen's spirit is here, she is with us now, and she is saying to us: 'Don't grieve for me, because I am free, I am at peace, and I will be waiting to greet you when it is your time to pass through the veil.'
As some of you know, Eileen was a very special friend to me, and we often spoke about the meaning of life and what was really important. And if Eileen's view of the purpose of her earthly existence could be summed up in a single thought, it would be this: to use wisely and well the gifts and talents God has given you, and to fulfill yourself in helping others.

On occasion, after I graduated from college, I shared a drink with Dad and Eileen in one or two midtown New York City bars. I can attest to the fact that they did indeed talk about the meaning of life after a day's work at the New York Telephone Building (now Salesforce Tower), where their offices overlooked Bryant Park.
Eileen was smart and sharply funny. Dad was smart and sloppily sentimental.
Eileen Vodola really was curious and helpful, and she left an indelible mark on many in her circle. I invoke her name here so it leaves an indelible mark on the Internet. I can find no photo of her online (and only one scant reference to her own marriage in 1957). She's not in any of the boxes in my garage, save for Dad's one typewritten page.
But I was in the church that day, 35 years ago. So I can also attest to the fact that Dad publicly professed his belief that the soul is eternal, and that death is merely the passing to a higher plane.
Coincidentally, one year ago today, another smart and sharply funny woman died: my mother-in-law. My wife and I visited her grave this morning in Montclair. I had written about Anne Bunce Cullinane here last year too.
There's now a violent storm outside. Ominous clouds at 4 in the afternoon, with wind-driven rain and lightning.
It's Dad's spirit. He wants me to post this. He demands that his friend not be forgotten.
OK, Dad. Here goes.
I hope that you... and Eileen... and Anne... really are free and at peace.
I hope that, to honor your names, I will use wisely and well the gifts and talents God has given me, and that I will fulfill myself in helping others.
I hope that someday you will all be waiting to greet me.
Posted by Bob Varettoni at 6:02:00 PM No comments: