July 2021 was a month of remembrance... and discovery.

Remembrance of two people who died recently, and another who died last year.

Discovery, in thinking about them and in reading obituary details, of how great an impact their individual lives had on so many others. 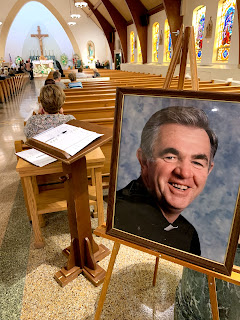 First, summoning the memory Msgr. Eugene Boland, I recall a priest who was my mother's pastor for many years and also the best friend of my beloved uncle.

At Msgr. Boland's funeral Mass at St. James in Totowa, I learned that his middle name was Mary -- which he was very proud of. It engendered his a lifelong devotion to the mother of Jesus.

His other two lifelong devotions were, first, to his extended parish family at St. James, where, according to Msgr. Boland's obituary, he baptized 1,364 infants, witnessed 470 marriages, administered First Holy Eucharist to 2,864 children, attended 37 confirmations, and grieved with 1,249 families. And, second, to his family and homeland in Ireland.

His funeral Mass was streamed so that so many back home could also take part. If you turn up the volume, you can hear and view the touching eulogy by his niece Noreen at the 22:30 mark. 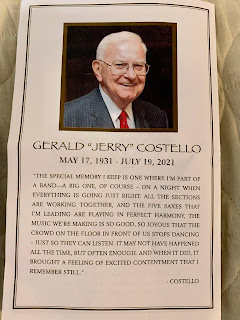 Second, summoning the memory of Gerald M. Costello, I recall an editor who recommended me for my first job in journalism, and who subsequently hired me twice.

I learned much about Jerry this month, especially that I was hardly the only one whose career he had sponsored... including my friend Monica, who sat next to me at the funeral, and the Catholic Standard reporter in the pew behind us, and the many others who posted similar expressions of thanks on social media.

Jerry Costello's obituary, written by his daughter Eileen, was wonderfully detailed. His eulogy, delivered by his son Bob, focused on the impact of Jerry's life on his six children, 21 grandchildren, and eight great-grandchildren. Bob also spoke of Jerry's love of music (which I had not known about), concluding with lyrics from Dan Fogelberg's "Leader of the Band" and applause from the congregation.

Last November, a reading of Art Samuels' obituary inspired me to post a tribute to him here, reflecting on lessons he taught me that went well beyond music.

Early this July, I received an email from Project Write Now, a New Jersey nonprofit working to transform individuals, organizations, and communities through writing. It excited me to learn that on the third Friday of every month during the pandemic this organization has been hosting a Zoom Open Mic for writers to share their original works.

I edited my tribute to Art down to 750 words and gave the reading below on July 16, with the slow movement of Mendelssohn's Violin Concerto in E Minor, Op. 64, playing in the background.

Bob Varettoni · Violin Reading
---------
With that, I'm taking a break from posting on social media in this wistful month of August 2021.

See you in September!