Let's Honor Derek Jeter by Not Deifying Him 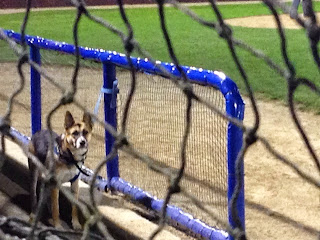 There was no one but a German shepherd in the dugout of the best baseball game I saw this summer.

All nine of the team’s players – dressed in full uniforms with Seadogs blazoned across their chests – were out on the field, and the dog belonged to the second baseman.

Their pitcher was tired. He had just walked the leadoff batter – and a player came charging out of the Sharks’ dugout to serve as third-base coach with a runner on first.

The pitcher turned to the shortstop, said something vaguely obscene, and all the infielders trotted to the mound and conferred for a few seconds. When they dispersed, the shortstop was the pitcher and pitcher was the shortstop. One of two black-suited umpires said, “Play ball,” in a disarmingly young voice, and on the first pitch the batter launched a pop foul that landed at my feet.

I picked up the scuffed ball. “Hey, a little help here!” the catcher called out from the other side of the chain-link backstop. So I threw the ball back onto the field.

Baseballs, after all, cost $14.99 each at Dick’s Sporting Goods – and the players here pay all the equipment costs. They aren’t millionaires, and the only people watching them besides me were a few family members and girlfriends. This was, after all, just a bar league game in Chatham, a few weeks after the Cape Cod Baseball League had ended play.

I had seen the ballpark’s shining lights in the distance on an ordinary Thursday night and had wandered over to watch 20 grown men dress up and play nine innings… just for the love of the game.

As this year’s MLB playoffs begin without Derek Jeter, I’m conflicted – perhaps as conflicted as the former Yankee shortstop himself – by his deification.

I’m a lifelong Yankee fan, and I’ve admired his play and demeanor for years. I don’t pretend to know Derek Jeter, the man. But I can promise you this: he is not, as seemingly every sports reporter or announcer has claimed, “larger than life.”

Life and baseball are larger than Derek Jeter.

If we really want to honor his legacy, maybe we can all try this week to give someone else just a little help here.

A Taste for Something Different 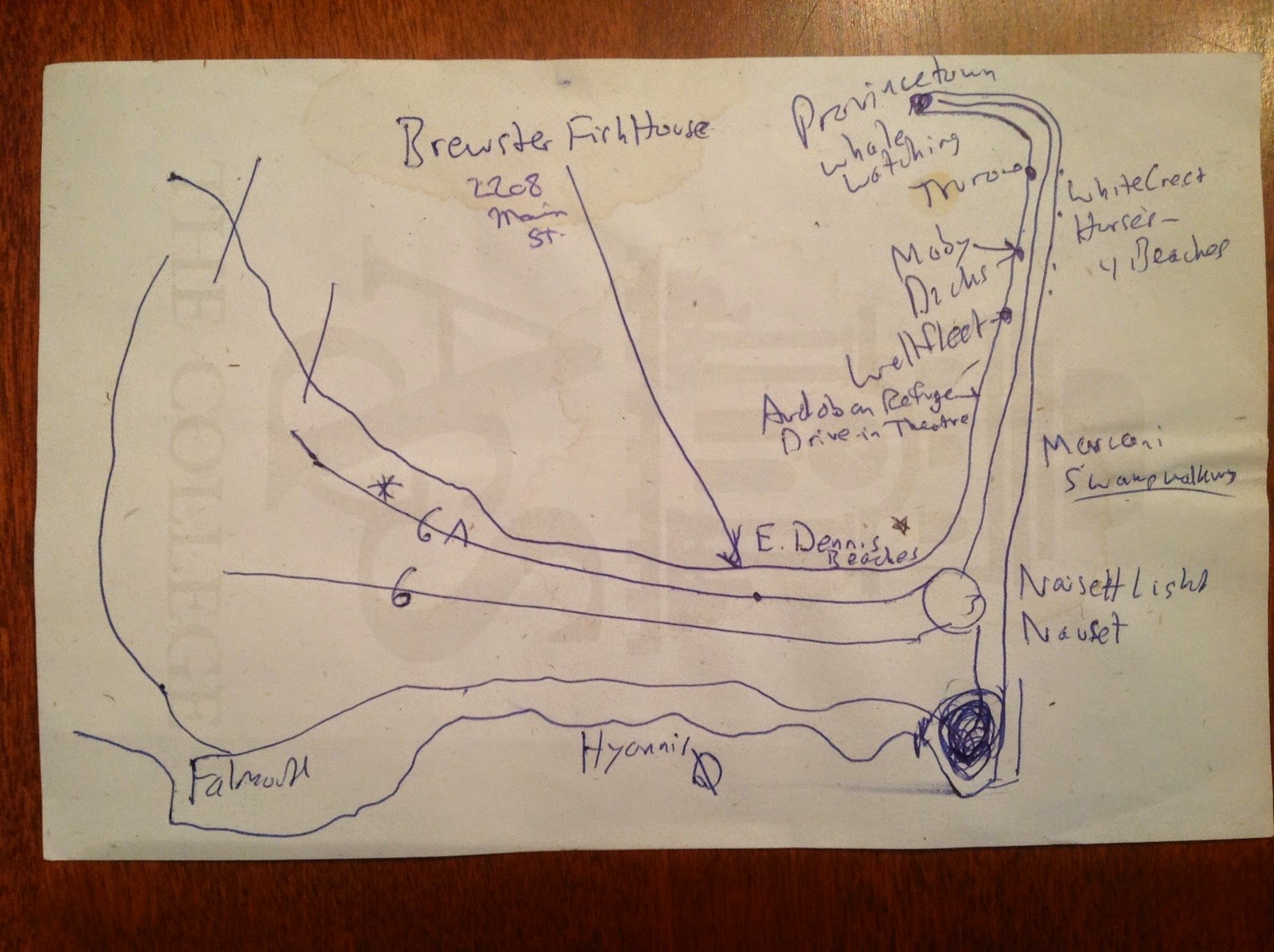 “Variety is the spice of life,” was the advice I often received, non-ironically, from my grade school teachers at St. James in Totowa, New Jersey.

I’m thinking of these Franciscan nuns, all dressed alike, on the eve of my birthday tonight.

I confess I must have let them all down because I have worked at the same company, been married to the same woman and lived in the same house for more than two decades.

But still, I am thankful for it all. Just two weeks ago, for instance, I was walking hand-in-hand with my wife down a dark, silent road under the breath-taking light of thousands of stars.


We were on Cape Cod, a long way from the virtually-starless light-polluted skies of suburban New Jersey. I was excitedly pointing out constellations, and I was so animated that my wife was laughing at me.

The Cape has become a favorite haunt of ours. And why? Because I seemingly have no taste buds.

One day, years ago, I was standing in line waiting for soup at the Aramark cafeteria in the Verizon building. It was New England Clam Chowder Day, always my favorite.

“You’re not going to actually eat that crap?” boomed a Boston-accent from behind me. It was Peter Thonis – the same boss I had for a dozen years.

“That’s not clam chowder,” he hissed.

A few days later, I challenged him to tell where to get real clam chowder. So he turned over a scrap of paper on his desk and drew a map of Cape Cod. He embellished it with various points of interest, and my wife and I decided to take our two daughters to the Cape that summer using Peter’s rough drawing as a treasure map.

The Cape turned out to be a magical place where natural laws ceased to exist. Our first day there we were traveling due north on Route 28 South, and we stopped for lunch at a dive called Moby Dick’s.

I ordered the soup. “Ha, they serve it in a cardboard container here too!” I said to my daughter Maddy, who looked at me, as she so often does, with confusion.

But when I took my first spoonful, I got a look on my face that concerned Maddy even more.

“What’s wrong, Dad?” she tugged at my sleeve. I think she thought I was about to cry.

I smiled and shook my head.

Sometimes, even a simple life can be full of wonder.

In Real Life: Love, Lies & Identity in the Digital Age by Nev Schulman


“Life is that happens when you’re busy not looking down at your smartphone.” That’s a quote @NevSchulman comes very close to using in channeling John Lennon in “In Real Life: Love, Lies & Identity in the Digital Age.” And – despite the fact that I work for Verizon and have both respect and wonder for the power of mobile technology – I believe this comes very close to the core of many of today’s relationship problems.

So I was fascinated with the first half of this new book and the profound insights the author gained from his “Catfish” documentary and MTV show.

The collaborative narrative woven by Nev Schulman and Angela Wesselman rivals anything I’ve read about the fictional Glass family. I wonder, are the stories of today’s online relationships this generation’s version of J.D. Salinger?

The book's second half devolves into relationship and life advice, primarily for younger unmarrieds – all good stuff, but not as compelling to me as the poignant catfishing stories.

View all my reviews

An Abject Apology to Stephen King 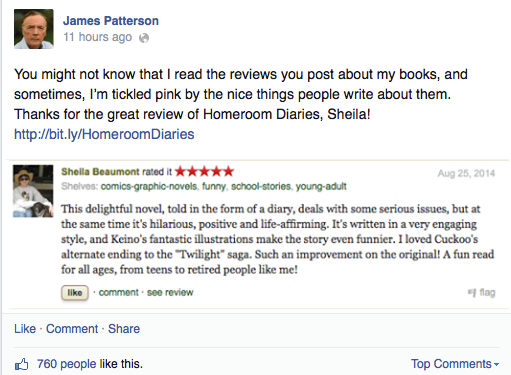 A Facebook post by James Patterson has just put more fear in my heart than any of the last three books I’ve read by Stephen King.

Mr. Patterson, whose books have sold more than 300 million copies, posted a snippet of a favorable review from an average reader. He wrote, “You might not know that I read the reviews you post about my books… Sometimes I’m tickled pink by the nice things people write about them.”

I am the very definition of an Average Reader, and lately I have been disappointed by one of my favorite authors, Stephen King, whose books have sold more than 350 million copies.

I’ve expressed this by recently posting three-star Goodreads reviews of three of Mr. King’s books. (All are the audible.com versions… I love listening to audio books during my commute.)


I’m frightened that should Mr. King stumble upon these reviews, he would think himself entirely justified to drive up to my house, ring my bell and kick me in the shins when I answer the front door.

To spare you a visit to Goodreads – where you can read the full reviews here – the following is a summary of my trilogy of disappointment:
If I’m really so clever, however, I should write a better story myself. But I know that unlike Messrs. Patterson, King and Koontz, I’ll never be able to touch more than billion souls.

I’ve sold zero books in my lifetime. On my very best day as a writer, I haven’t influenced as many lives as Mr. King has when he composes a grocery list.

Halloa, Watson! What’s that? Is that someone ringing my front door bell?? 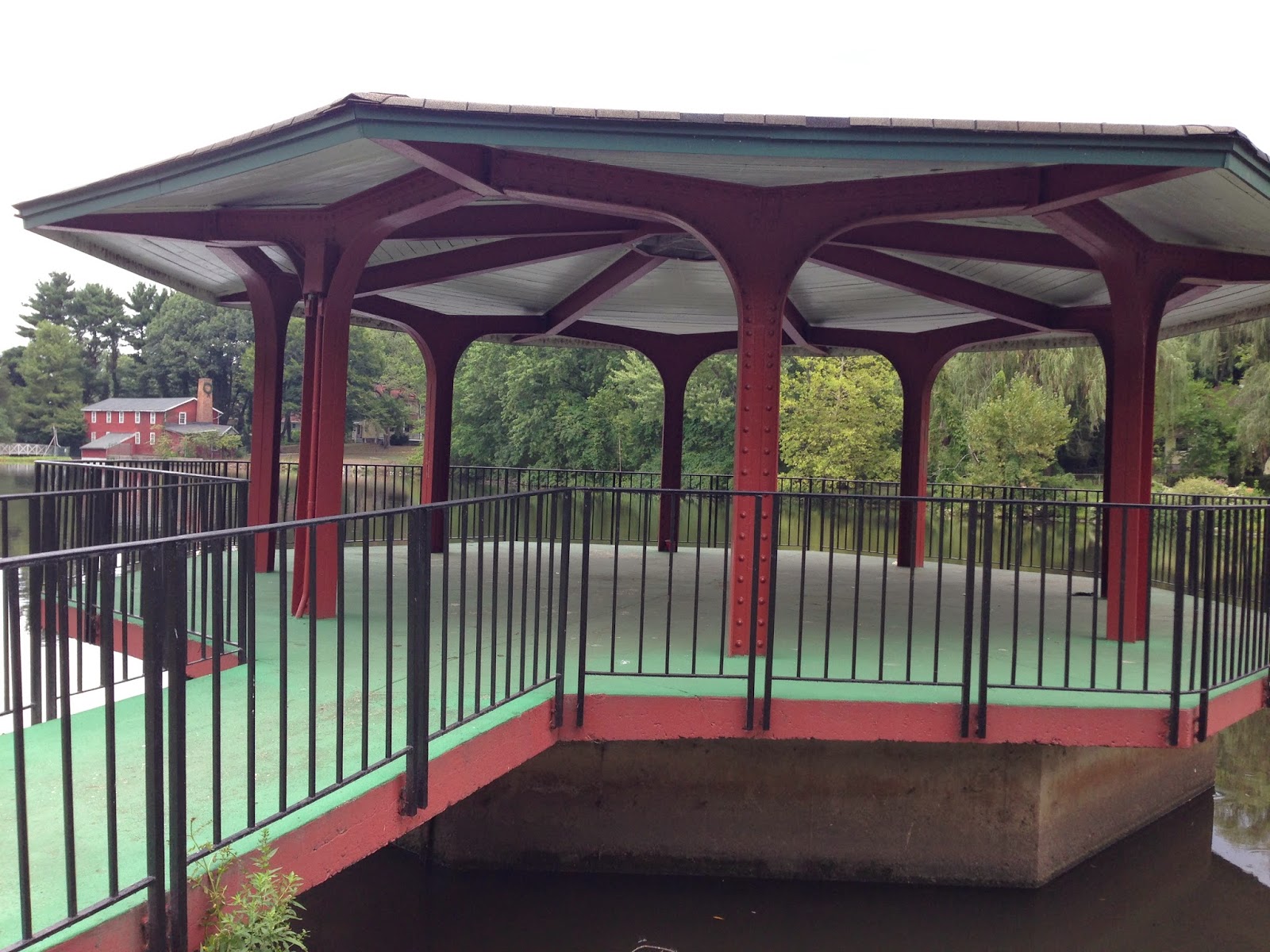 A “joy ride” is a father-daughter outing on the last night before school starts. I invented it and, over the years, I dare say I perfected it.

Take, for example, this photo of the empty gazebo at Cooper’s Pond in Bergenfield, NJ.

Less than 20 years ago, on this same night in that same gazebo, you’d have seen a somewhat chubby dad dancing with abandon with a laughing little girl wearing her 101 Dalmatian onesie pajamas.

That would have been the first of my eldest daughter’s many joy rides.

Joy rides grew to become legendary — even epic — ending at dawn last year in a hot air balloon over central New Jersey before my youngest daughter returned to college.

I can’t tell you the details of all that happened in between — in part because Joy Ride, like Fight Club, involved a sacred trust summed up by three little words that will forever bind me to my daughters: “Don’t Tell Mom.”

I will admit, without pride, that there was some underage driving involved. Also a memorable road trip with both daughters to Philadelphia. In later years, I recall the fleeting image of a man in dreadlocks with a parrot on his shoulder in Newark. But really, it’s best for all of us if I don’t elaborate because then I’d have to explain why my younger daughter once lovingly turned to me and said, “You’re despicable!”

On Joy Ride night, we ritualistically abandoned the laws of man. We mocked the concepts of getting a sensible night’s sleep or of minding our diets. And we sure as hell had fun because, in the immortal words of Aunt Joann (who somehow, without her knowledge, wound up as our muse), “The world is our oyster.”

Tonight, just a few minutes ago, I received a message from my daughter — the little girl in the gazebo. She sent a photo of something fun she was doing on her last night of vacation before starting work.

As for myself, far away from both daughters, I don’t know what I might do tonight. There’s only one thing I know for sure:

I won’t be getting a good night’s sleep.