This is George Harrison’s 75th birthday weekend. I say “weekend” because even George himself long thought his birthday was February 25th – until one day he learned he was actually born a little before midnight on February 24th. (That’s true. You could look it up.)

George randomly popped into my thoughts two weeks ago after, of all things, I had re-read Willa Cather’s “My Antonia.” I was sad the book didn’t seem as relevant to me after so many years had passed, and I started thinking of creative works that, to me, were still as fresh as when I first encountered them.

Thank God for “The Great Gatsby,” I thought. And the poetry of Yeats. And anything by Poe.
Then I thought of the music of The Beatles.

More than 50 years later, and their music still gives me chills. Despite the untimely deaths of George and John, The Beatles are, for me, forever young and new and bright. They were simply pop musicians, and yet they changed the world for the better.

In the early 2000s, before The Beatles catalog was opened up to streaming and available on Apple Music and the many retrospectives were released – and well before Sirius XM launched The Beatles Channel – it was somewhat rare and a bit unexpected to hear a Beatles song on a car radio. On family drives, with my young daughters in the back seat, they would get to know Beatles’ songs because daddy would suddenly turn up the volume and begin to tell stories about one song or another, sometimes with a sentimental tear in his eye.

Despite this, I’m proud to say that both my now-grown daughters are still Beatles’ fans today.

Now it’s 2018, and the music of The Beatles again seems to be here, there and everywhere. On car rides without my daughters now, I especially look forward to a Sirius XM segment called “My Fab 4,” where listeners, artists and celebrities share their favorite four Beatles’ songs and what makes them special.


Because, after all, it’s George’s 75th birthday weekend. Because George was just 26 years old when he wrote this song, even though, by then (1969) the Beatles had already conquered the world and were about to break apart.

Of all the Beatles songs, this one – already widely revered when it was first issued – seems to have gained the most in popularity in the intervening years. It’s recently been the most popularly streamed Beatles song, and it’s easy to understand why.

It’ joyful. It’s an end-of-winter song that lifts the soul. It soars, and it takes you with it.

Not only that, I pick this song first because George is my wife’s favorite Beatle. And because it leads into “Abbey Road”’s next song, “Because.”

2. The whole freaking second side of “Abbey Road”


Vinyl had sides, and this was the best side of vinyl ever pressed.

In November 1963, in one of the first U.S. major news stories about The Beatles (several months before they appeared on “The Ed Sullivan Show”), NBC’s Edwin Newman noted that all four had been born during The Blitz (the horrific German bombing offensive against Britain during World War II). They grew up in the Mersey section of Liverpool, which Newman called “the toughest section in one of the toughest cities in the world.”

John always maintained that edge and – to me – it was always this element that separated The Beatles from every other great pop music group at the time. I recall John’s shockingly frank interviews in Rolling Stone magazine, which for several weeks in my early teens led me to casually drop f-bombs into my conversation in imitation. I soon stopped that practice, realizing I could never even play-act being as cool as John Lennon.

The medley of songs on the second side of “Abbey Road” is pure 20th Century musical genius – from Paul’s rare bass guitar mistake on the aforementioned “Polythene Pam” all the way to Ringo’s one and only recorded-with-The-Beatles drum solo on “The End.”

Trivia question: What’s the only song in the world recognizable by its opening note?

That’s right, it’s the opening chord of “A Hard Day’s Night,” played by George Harrison on his 12-string Rickenbacker guitar.

I list “A Hard Day’s Night” here as a meme for all the great early Beatles songs… beginning with that appearance on the Sullivan show (in 1964, when Paul McCartney was only 21 years old), where, safe in suburbia in front of a black-and-white TV, a very young me marveled at the crazed audience reaction… unaware of the raw emotion that rock and blues had already tapped into years earlier and in so many other, less-sheltered places. 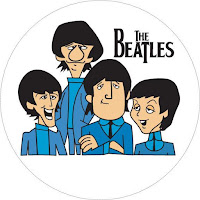 For me, “A Hard Day’s Night” represents a time of watching Beatles’ cartoons on Saturday morning TV, and being amazed, through the years, how their music matured and grew over the years. I was just as transfixed, and awed, years later when I first saw the videos on TV for “All You Need Is Love” and “Hey, Jude.”

In fact, in my entire life, I’ve only been flummoxed by one celebrity sighting. I was at a Verizon-sponsored table in 2002 at an Amnesty International event at Chelsea Piers in New York, and at a table practically right next to us sat Paul McCartney and his then-wife Heather Mills.

I was a blithering idiot all evening, in full fan mode. “That’s Paul McCartney!” I repeated more than once, to no one, spilling my water and fumbling with my knife and fork. In fairness, as my boss pointed out, “if you’re acting like this just because you’re in the same room with someone, Paul McCartney is probably the one person in the world I can understand.”

At one point, when Paul was asked to take the stage, I had to stand and pull a chair out of his way.

“Thanks, mate!” he cheerily said to me, touching me on the shoulder as he passed.

Ever since, my wife and daughters have always, over the years, referred to Paul, as my “best friend.”

Sir Paul, if you ever read this, I’m sure you understand what I wrote about John. Someone had to carry on – and in the humble opinion of your friend, I think “Hey, Jude” truly is amazing and “Maybe I’m Amazed” is without doubt the best post-Beatles song ever.


The Beatles somehow recorded this song on four-track tape machines – the equivalent of sending someone to the moon and back with technology that’s less advanced than today’s cell phones.

The first time I heard this song, I was in a grade school class at St. James in Totowa, N.J.

It was near the end of the school year, and one of the coolest girls in the class (Maureen Dunne? Marianne Hydock? It’s all a blur to me now…) had bought one of the first copies of the album “Sgt. Pepper’s Lonely Hearts Club Band.”

She played this song on a phonograph for the entire class to hear.

It was this song. Despite all the music I had listened to until then, it was like nothing I had ever heard before.

How many times does that happen in your lifetime? When some item is so incredibly new, and surprising – and you recognize it right away.

It happened with I saw the first “Star Wars” movie, and years later when I first held an iPad… and it happened for the first time in my life when I listened to “A Day in the Life.”

This is magic. This is what The Beatles created. Happy birthday, George.

No Way to Prevent This Violence? 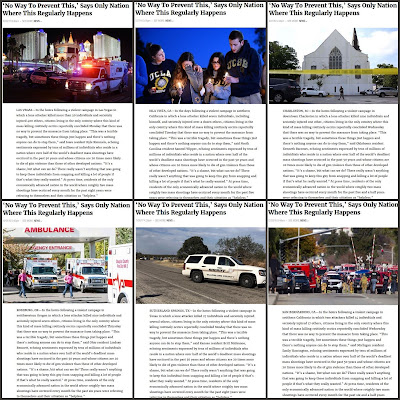 I had intended to post a lighthearted retrospective of #DateNight photos to cap this past week, but something happened on Valentine's Day 2018 that broke everyone's heart instead.

After every mass shooting since 2014, satirical news outlet The Onion has repeated the same story (excluding a change in headline in 2016) with an updated photo and updated casualty statistics: "'No way to prevent this,’ says only nation where this regularly happens."

Sadly, satire is not fake news. There are no words, only this: "Here's How to Take Action on Gun Control." 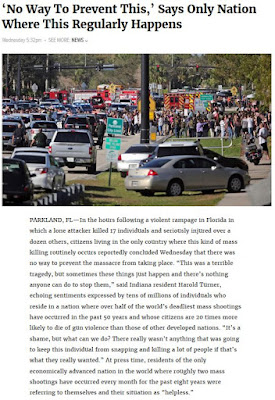 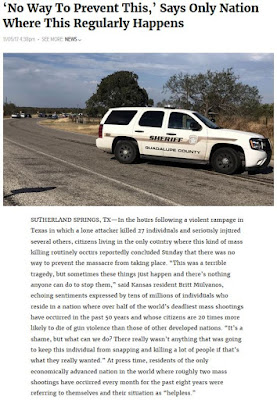 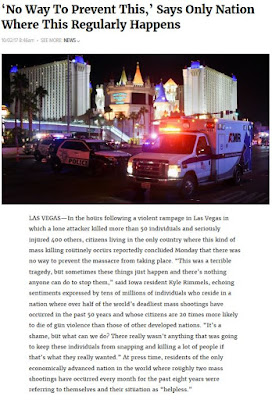 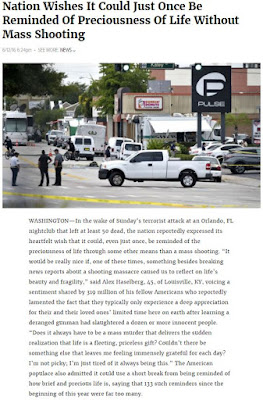 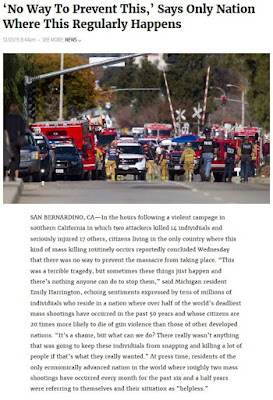 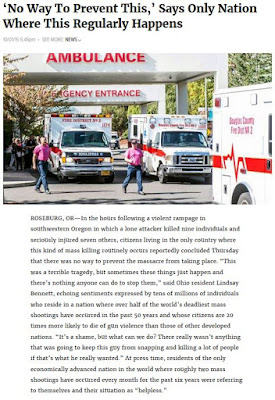 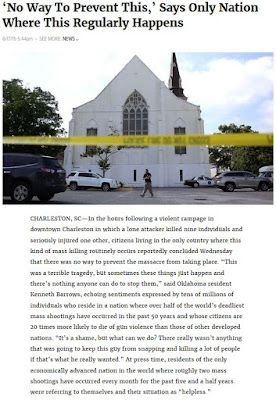 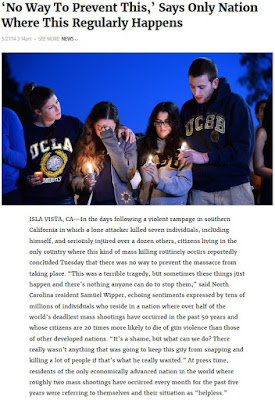 Confessions of a Closet Journalist 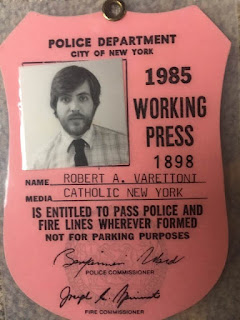 I confess, this is my favorite photo of myself.

It's not because of the Ben-Affleck-in-"Argo" haircut and beard.

It's because it's part of a real, honest-to-God New York City press pass... one of the few things in this world even better than having your own Wall-Street-Journal stipple hedcut.

That's why I find it sad today that I even feel the need to write this, but here goes...

I respect and admire journalists very much. They play a vital role in society. Their contribution is incalculable, and their jobs have an extraordinarily high degree of difficulty, given changing technology and audiences, industry competitiveness, and mounting political pressures. All this, combined with long hours and almost no job security.

For personal reasons, I left the field before my press pass expired, and found a home in corporate public relations as a spokesperson. Not a bad gig, either. Because of it, I've had the privilege of getting to know and work with some of the best journalists in the world.

Daily interaction with journalists brings a perspective to my work that can be lacking inside the corporate bubble -- otherwise known as The Land of the $1,800 Louis Vuitton Chair.

Take, for example, the recent Super Bowl commercial for Ram trucks. Imagine the collective consciousness of reporters and editors: "What were they thinking?" Below is a short video that digs a little deeper into the same sermon by the Rev. Dr. Martin Luther King Jr. that's used in the ad...


Verizon, the company where I work, has bought and sold many businesses over the years. I haven't had to change companies to learn more or tackle new challenges... the company always seems to change around me. "It's good to be Bob," as my wife often sighs.

I've been lucky, blessed and proud to advocate for a business focused on building networks, and which makes its money by connecting people and enabling life-changing new technologies.

This past week I had the opportunity to talk to members of a professional PR organization about corporate financial communications and working with journalists.

I wrote a summary of that presentation, intending to post it here. I've changed my mind, though, and invite you to read "Have Fun With Numbers, and Advance Your PR Career" on LinkedIn instead. (Having, I confess, learned by osmosis the importance of page views.)

It's a rainy Sunday morning in New Jersey. Every minute someone new is tweeting about #FakeNews. Every minute the truth is being manipulated by different sides with different agendas. That's why there's nothing more important to post right now than to offer a word of encouragement, and thanks, to all journalists.

PS - Here's an unsolicited plug for a candid, sometimes heart-breaking personal blog by reporter and editor Kyle Foster. Journalists are usually the best writers, too.


Pardon this commercial interruption... on Super Bowl Sunday, of all days...

But this story is incredible, and the included videos are heart-warming.

As my colleague Meg Schaefer explains, "Verizon teamed up with director Amir Bar-Lev and an investigative journalist to give the people who were rescued by first responders the opportunity to thank them. But to do that, we needed to track down the first responders – the one’s who always answer the call so that they could answer one more… one they would never forget."

Please give this a look. All the videos are posted at www.verizon.com/about/news/phone-call-theyll-never-forget.

Watching them will make your day, and week, and month.

To learn more about the stories and share your thanks to first responders, visit AllOurThanks.com.