A review (of sorts) of:
A Head Full of Ghosts by Paul Tremblay
My rating: 3 of 5 stars

In August 2015, Stephen King -- yes, THE Stephen King (if we are to trust Twitter's blue checkmark) -- tweeted: "A HEAD FULL OF GHOSTS, by Paul Tremblay: Scared the living hell out of me, and I'm pretty hard to scare."

So, who am I to argue the King? And yet... I found most of this story, save for some cleverly written blog entries by the main character, to be excruciating rather than scary. Perhaps because I raised two daughters in real life, and the plot here centers around two young sisters.

I also started to think about my grandmother as I slogged through this tale. She died years ago, but this book made me recall how she used to wonder why anyone read would fiction. "It's just silly stories," she'd say.

Now, admittedly, she was a Bible reader, so she did take some stories as a matter of faith (which this book dutifully ridicules). But, setting that debate aside, her main point was: "Why waste your time?"

Of course, here in 2017, storytelling is supposed to be the answer to everything... love, happiness, marketing, effective communication... you name it.

The Twitter background of my boss (who is real, despite not having a blue checkmark), even features this quote from Plato: "Those who tell stories rule the world."

As I listened to the Audible version of this book, though -- realizing it was a masterful writing job, and I'm sure the movie will be successful and that the author will be, if not already, rich -- I kept wondering, "Why am I wasting my time? Haven't I seen, read or heard all this before?"

In fairness, I picked up this book to be scared -- and, on one level, I think I am. But not because of all the predictable gore and manipulated shocks in this story.

I'm scared because I think my sainted grandmother might have been on to something, after all. Sometimes a story is just a cigar and a cigar is just a story. If the words aren't Great Gatsby transcendent, if the ideas they express aren't New Testament challenging or enriching, then what the hell am I doing here in 2017?

Am I simply spending my time begging to be frightened, or entertained?

"Tell me a story" may indeed be a building block of love (intimacy), happiness (connection), marketing (persuasion) and effective communication (acceptance).

It just doesn't get us any closer to greater meaning or insight or -- as I think of my grandmother -- redemption.


View all my reviews
Posted by Bob Varettoni at 7:13:00 PM No comments:

Still, it was challenging to try to steer clear of politics and focus on communications lessons. Luckily for the energized and engaged audience of more than two dozen, moderator and former IABC-NJ board member Rich Ecke of Berry Ecke Associates handled things like… a consummate politician.

He, along with panelists Dan Cassino, Ben Dworkin and Pat Politano resisted any urge to “re-litigate” the election results, and in the context of the “takeaways for communicators,” several themes emerged.

Authenticity.
“Who wants to be inauthentic?” Dworkin, who teaches political science at Rowan University, asked rhetorically. The new reality, he explained, is that the way to create authenticity has changed. The old rule of authenticity, Dworkin said, was that you apologize for a mistake and move on; the new rule is to not apologize and stick to your guns.

The old rule: media endorses your authenticity. The new rule: the media is a foil.

Cassino, who teaches political science at FDU, added that “authenticity is now in the eye of the beholder” and is “something we build for ourselves.” What does inauthenticity sound like? That’s easy: when one political candidate sounds just like all other political candidates. Just like when one company uses the same PR approach as every other competitor in its industry.

Dworkin also cited an unchanged rule when it comes to authenticity in business communications: “In business, if you have a lousy product, it doesn’t matter if you’re authentic.”

Simple Messages.
Politano, a political media consultant and strategist, said that the effectiveness of a simple message is still the greatest takeaway from the past election season. And while a political campaign has an end date, and an election is a fixed moment in time, business communicators need to have a sustainable message. “Big messages still matter,” Politano said. “Only the method of delivery has changed.”

Social Media.
“Reporters live on Twitter,” Cassino observed. Candidate Trump’s tweets drove and dominated coverage, which in turn drove public opinion. Dworkin called it “The Twitter Election,” and Politano said that the increasingly fewer number of journalists, “chained to desks in newsrooms,” were increasingly relying on Twitter as a news source.

Cassino noted that the Associated Press, for example, now has only one part-time reporter covering New Jersey, and that the “hollowing out” of the media ranks has put reporters “in a bubble.”

Still, Politano noted, Twitter is simply a tool to the message, and clarity, simplicity and directness are hallmarks of effective messaging that cut through clutter, especially in a business environment. And especially, if messages can be stated in less than 140 characters.

New Rules.
Dworkin returned to the theme of old vs. new rules. The old rule was “message discipline.” The new rule, he said, is that the effectiveness of clear, simple messaging depends on the situation, and that this election season proved the value of keeping competitors off-balance and NOT having message discipline, especially in highly competitive business environments.

One audience member commented that a lack of message discipline seemed counter-intuitive in business communications. Dworkin responded that Trump kept his competition off-balance and unable to counterpunch effectively. Also, the timeliness of the attacks fueled the news value of the attacks.

Politano said, “Trump’s uniqueness enabled him to use this tactic. He’s been doing this for years. It’s his brand.” Cassino added that a changing message can be effective in business if it’s used to acknowledge problems, for example, because it demonstrates listening. ”The mere act of telling customers or employees that ‘I understand this is a problem’” can be a highly effective communications strategy for business leaders, he said.

Attracting Attention.
“You can’t replicate or copy Donald Trump,” Politano reiterated, “but you can take away lessons from his campaign… about how the media works now… about the effectiveness of acknowledging problems.” And about how to attract attention.

Business communicators, Cassino said, should know that “if you want to hide something, put it in a rote press release or standard memo. When you put out a ‘press release’ that doesn’t look like a press release, it will attract scrutiny. When people see something novel, they pay more attention.” Attention is neutral, and can turn positive or negative, but attention itself is hard to come by in today’s society.

Dworkin said, “When we talk to each other, we talk the same. Politicians all sound the same. Trump didn’t, at a point in time when people were looking for something different.”

The Politics of Change.
“Change” can be a compelling theme – for both politicians and professional communicators.

Politano offered a valuable insight about the inevitability of constant change. If there’s one thing a career in politics has taught him, he said, it’s that “everyone will say they want change, when the one thing that scares them the most is change.”

Politics aside, for IABC members who help business leaders communicate to employees, that too is an important lesson to keep top of mind.

This post first appeared on the website for the New Jersey chapter of the IABC.
Posted by Bob Varettoni at 12:29:00 PM No comments:

Harry Potter and the Sorcerer's Stone by J.K. Rowling
My rating: 4 of 5 stars

This book will be 20 years old this year, and there's nothing to "review" here. It's proven to be a fairy tale for our times, with an inspiring backstory about the author... and a catalyst for a generation of new readers. Magical things, all. Still, reading this for the first time in 2017 (or "listening to it," since it was only recently made available on Audible), it simply reminders me how quickly two decades can pass. I can't otherwise relate. The magic in my life is that I can close my eyes and vividly see my family years ago at the dinner table. We're laughing. It's a lively conversation. I've just asked my young daughters what they thought of the book. You can only imagine what Maddy had to say.

When Breath Becomes Air by Paul Kalanithi
My rating: 4 of 5 stars

This is the second consecutive book I've read this month that defies being "reviewed." It's a testament and accounting of a man's life -- and death. Period. I would note, in review of Abraham Verghese's introduction, that Paul's friend promises transcendent writing and insight. Honestly, I found neither... despite that fact that Paul, in his own words, was truly heroic and inspiring. Besides, I don't think the author would have wanted us to look to him for transcendence -- or easy answers.

View all my reviews
Posted by Bob Varettoni at 2:40:00 PM No comments: 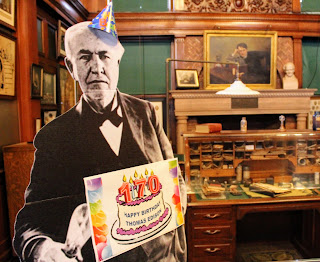 I visited Thomas Edison National Historic Park in West Orange, NJ, today -- on Thomas' 170th birthday. I posted some photos too.
Posted by Bob Varettoni at 8:50:00 PM No comments: