Build a Cathedral With the Sound of Your Own Voice

In our video age, what’s the most underappreciated communications medium?

It’s the powerful magic inherent in the sound of our own voices.

This, according to Vivian Schiller, an accomplished and respected strategist who recently spoke at Verizon’s campus in Basking Ridge, NJ, about the intersection of journalism, media and technology.

She shared insights about fake news and other vital topics, but when asked about emerging trends, she had a surprising observation.

Vivian noted a resurgence in the form and popularity of “podcasts” (for want of a better word). That is, short-form audio that can be streamed or downloaded, as an effective tool of modern communications.

“After print, audio is the oldest form of media,” she said. “It’s the only form of media you can consume while you’re doing something else. You don’t need to look at it.”

She continued, “There’s something magic about audio. It’s deeply personal.”

Think about it. Is there anything more intimate than someone whispering in your ear?

This is primal. Images left to our imagination can be much more powerful than images presented to us, and filtered, for our appreciation or entertainment.


Words are symbols representing something based in reality. Strung together – adding a human voice, either in song or spoken word, with flow and melody and meaning – mere words become something more than reality. They become the bricks and mortar we can use to build our own cathedrals.

Think of the Bible story of Elijah, who went to look for God on top of Mount Horeb:

Elijah sighed wearily, unmoved by all the destruction. He returned to his cave, content to wait for the fire to burn itself out because he knew God was not in the fire.

The next morning, waking from a dream, he heard a close but barely perceptible sound. The prophet staggered to his feet then fell to his knees and hid his face in the sleeve of his coat. He was shaking with fear, because he knew God was in the whispering voice.

In my own life, I consider how I am spending more and more time these days listening to audio books, which has reignited my love of literature and sparked my curiosity about many topics outside the scope of my career.

I also think of my continued fascination with poetry.

Experimenting with audio a few months ago, I posted about how I had recorded an Elizabeth Barrett Browning sonnet my late Dad used to recite to my mother, so that Mom could listen to it today on her Amazon Echo.

Today, I'm trying another experiment, to share with a wider audience: In an 8-second-attention-span world, I’m inviting you to listen to a spoken-word, 8-minute excerpt from something I wrote a long time ago.

The scene is set is the grandeur of the very real St. Patrick’s Cathedral in New York. It’s about an ordinary man’s dreams and a lost love named Virginia. In all the thousands of words I’ve ever written, these 1,200 are perhaps my favorite.

So, inspired by Vivian and summoning the gods of underappreciated magic, I invite you to listen to my story. It begins, “After a fitful night...”

Three Haikus Walk Into a Bar...

It's no joke that I'm a fan of poetry, whether it involves memorizing passages or yesterday's post about writing sonnets on demand.

I've lately also been experimenting with using haikus (or a bastardized version of a haiku, which is sometimes all I can manage) as captions for my Instagram posts.

For what it's worth, I'll plant three examples right here, virtually water them, and otherwise include no commentary. Let's see how long they live: 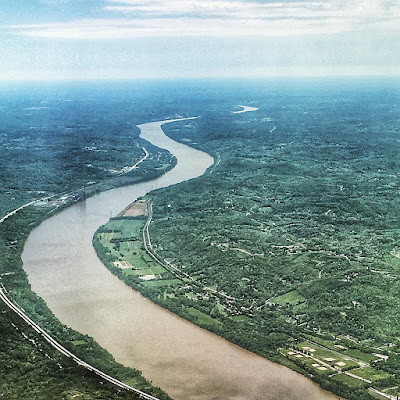 Over a muddy river
Ohio, as a ghost 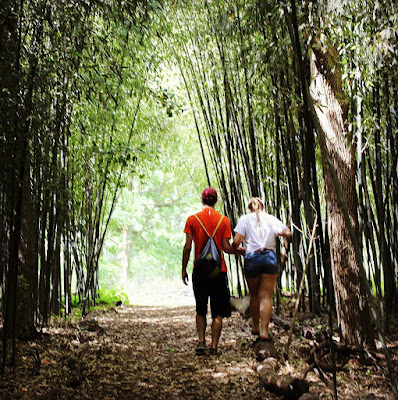 We hold hands in bright colors
And head for the light 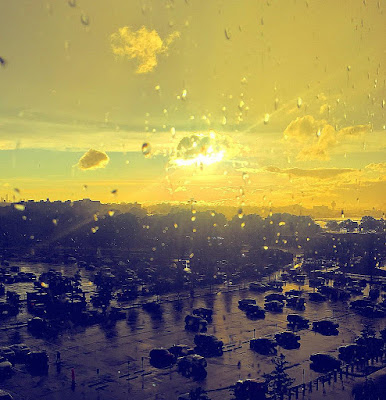 Rain at dusk in Queens

Exploding sky to the west
Gatsby in New York 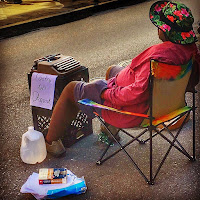 This street poet I admired during a recent trip to New Orleans reminded me how much I used to like writing sonnets. So I had started this one on Wednesday night:

I have encased my soul in tempered glass,
Displayed it on the mantel in our home.
The frame collects the dust beside the vase
Of silk flowers embed in styrofoam.

Beneath this centerpiece, a raging fire,
Timer-controlled, heats wood that doesn't burn.
The warmth is real, and I am safe. Desire
Consumed, I wait alone for love's return.


I fell asleep at this cliff-hanger at the start of the third stanza. Thursday, after all, was just another working day, and (as Paul Simon sings in a favorite of mine, "American Tune") I needed to get some rest.

I was struggling to finish this at home on Friday, weary from the week. It was quiet in our living room, and I looked at my wife reading in the corner, when the 9 o'clock church bells started to ring at nearby Ascension parish. The church has a tower, but it is empty of an actual bell. Instead, there's just a speaker that plays recorded chimes throughout our neighborhood.

That's when I took out my trusty notebook -- one a friend from work, Jason Moriber (now forever remembered here), unexpectedly bought me one day as we were hanging out during lunch hour in New York -- and I came up with this:

I have encased my soul in tempered glass,
Displayed it on the mantel in our home.
The frame collects the dust beside the vase
Of silk flowers embed in styrofoam.

Beneath this centerpiece, a raging fire,
Timer-controlled, heats wood that doesn't burn.
The warmth is real, and I am safe. Desire
Consumed, I wait alone for love's return.

Then in you walk... Alarms trip. Cats take flight
And lose several lives. A fake church bell sounds.
You flip the light. Night is day; day is night.
Hamlet, without doubt; Ophelia, undrowned.

My kingdom would be bound in a nutshell,
Had not your flame out-scorched suburban hell. 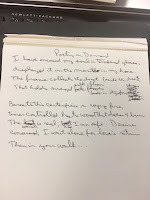 I was thinking of a favorite line from "Hamlet" at the end -- "I could be bounded in a nutshell and count myself a king of infinite space, were it not for my foolish dreams."

Anyway, on Instagram -- and now forever here too -- I am offering to write a sonnet on demand for anyone. Just send me a topic and the reason why you chose it (bvar@verizon.net).

Like the virtual street poet I hope to become, I'll do my best to deliver poetry on demand.
Posted by Bob Varettoni at 11:42:00 AM No comments: