For All the Saints

I posted this on Instagram on the rarest of dates, February 29, to tuck this away in a remote crevice of time...

When I was a boy, I spent several weeks every summer surrounded by these religious images. They’re still there, right where my grandmother left them, in the spare bedroom of her house, where I took these photos last weekend. I thought of these images yesterday, while attending the funeral of a friend who died too young from cancer. It was a beautiful, and touching, service. Everyone was eloquent in their remembrances and tributes. And yet, after the last of these, when we all joined in the Lord’s Prayer, we used the archaic English formula: “Our Father, who art in heaving, hallowed be thy name…” Why do we do that? It’s as if the language of everyday life isn’t important enough for prayer. These stilted prayers are like the religious artifacts in my grandmother’s bedroom. Curios from an ancient past. These days, I don’t need statues to remind me that saints exist. I know they exist by the absence in my heart: my grandmother, my father… and now my friend. While I feebly struggle, they in glory shine.
A photo posted by Bob Varettoni (@bvarnj) on Feb 29, 2016 at 8:27am PST

Find a Unicorn and Teach It to Fly 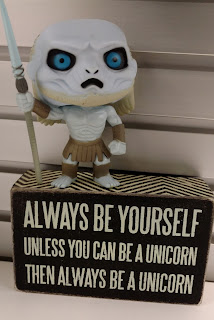 I'm speaking at an IABC-NJ professional development event at Rutgers next week and posted this preview on the organization's website...

When my colleagues on the IABC-NJ Board, Kristin Federico Nestor and Jeryl Turner, first suggested an event called “Obtaining and Enhancing a Career in Communications,” I thought a more honest title might be “Finding a Unicorn and Teaching It to Fly.”

After all, great comms jobs are hard to find and harder to excel at. And the ever-changing nature of what a career in communications looks like these days is not for the faint of heart.

But Kristin and Jeryl are fearless — and well-connected. They’ve lined up two of the industry’s best to lead an informal panel at the Rutgers University School of Communications & Information in New Brunswick on Wednesday evening, Feb. 24 (ticket info and more details here).


As the keynote speaker at our chapter’s spring social, Deidre asked, “Are You the Modern Day Communicator?” She stressed that the future of communications is now, and emphasized how as communicators we must drive that future. Sandy has also been a friend to our chapter. At a career development seminar this past July, she encouraged the audience to work with purpose and passion, pointing out how job candidates are often more concerned about salary and title. She closed with a favorite quote from Confucius: “If you choose the job you love, you’ll never work a day in your life.”

I’ll have the pleasure of joining Sandy and Deidre on the panel at Rutgers on Feb. 24. I plan to provide the perspective of someone who has been lucky enough to have spent a long career in communications. I’ll likely mention the value of professional development, and the value of organizations such as, well, IABC-NJ.

With constantly updated skills and a supportive professional network, you may find that building a career in communications really isn’t unicorn-impossible. It does take some work, though. It might be right up there in difficulty with finding true love and making it last.

But I know that’s possible too. After all, I was reminded of this the day before yesterday, on Valentine’s Day.

Book Reviews by a Fan of Stephen King 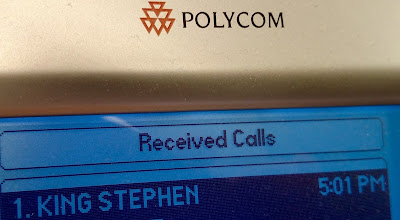 I've been posting book reviews at Goodreads for the past four years... sometimes off-handed, but always heartfelt. Reading them as a whole, all on one page -- which you can do right here -- reveals some disturbing things about my character. For example:
Of course, Stephen has no idea I exist. Still, I've been hyper-critical of the author in some of my reviews, and a feeling of King-like dread enveloped me recently when I saw his name appear on my phone's caller ID display at work.

And of course, I answered -- I mean, you always open the door at the top of the stairway when you're alone in the house, right?

The fellow on the other end of the line sounded, in fact, like the real Stephen King. Everything he said, however... a blur of words about a concern that I dutifully took notes about and sent to Verizon's Customer Service department... sounded not-at-all King-like.

Finally, I broke character before saying goodbye. I assured him I would look into his concern, but then added that I had recently listened to both "Finders Keepers" and "The Bazaar of Bad Dreams" using Amazon's Audible app (and, in fact, would have given them both 4 stars had I reviewed them on Goodreads -- although I didn't mention this). I still think King's stories are too long -- but, really, what's so wrong about settling in to a good long story, well told? It's one of life's luxuries, for free.

"Well, thank you," the man on the other end of the line said politely, adding, "My own favorite is 'The Stand'."

Shortly afterward, I heard back from Customer Service about the resolution.

The Customer Service manager simply laughed in anticipation. "Oh, no," she said, "that wasn't THE Stephen King."

But yet another disturbing thing about my character is that, really, I did.

The Half-Life of Carly Simon


Boys in the Trees: A Memoir by Carly Simon


The Half-Life of Carly Simon

This is an enjoyable listen – and I do mean listen, since the audio version of this autobiography is read by the author and includes a musical score woven throughout – about the first half of Carly Simon’s life.

The narrative basically ends in 1984, when Carly (as I’ll take the liberty of calling her) visits the obnoxious CEO of the publishing company that bears her father’s name. Suffice it to say, I’m very glad that this book has been published by Macmillan.

Still, it’s an enchanting read – in the same way her 1988 song “Let the River Run” (too current to be mentioned in this book) can enchant you with lyrics that, while poetic and evocative, don’t necessarily make sense if you think too much about them.

That’s exactly what happens with the writing here too. It so often, and sometimes infuriatingly, lapses into semi-poetry. But Carly uses just enough significant detail about the often-shocking incidents of her life that you feel compelled to keep reading (or listening).

Charmed or bewitched, I stayed for the whole show… a “final” chapter, an epilog, then two more “chapters” (a song and a legal disclaimer). Her stories took me back to high school and the anthems of my first girlfriend -- from first kiss (“Anticipation”) through breakup (“That’s the Way I’ve Always Heard It Should Be”). I never knew that Carly passed right underneath my first apartment in New York one night on her way to confront James Taylor’s lover. I recalled, years ago, first hearing her cover of Cat Stevens’ “Into White,” and thinking, “Wow, that’s random.” After listening to this book, I learned it wasn’t random at all.

So, for a few hours, I got to hang out with the cool kids, and realize that, hey, they’re just people too. In fact, even though Carly still loves him, good ole’ JT is a bit of a self-centered jerk, isn’t he? But then, the same might be said of me – and I’ll really have to hustle to contribute even a sliver of as much beauty to the world.

I’m awestruck by anyone who can look back on life without having to say, “I wish I had done that.” I appreciate, and admire, that Carly’s half-life makes for a pretty full, and memorable, book.

It will certainly be in my head the next time I visit Martha’s Vineyard. I’ll wander hand-in-hand with my wife on some street Carly might happen to be… and she won’t even know that we passed right by her.


View all my book reviews
Posted by Bob Varettoni at 4:53:00 PM No comments: