I Miss You, NYC 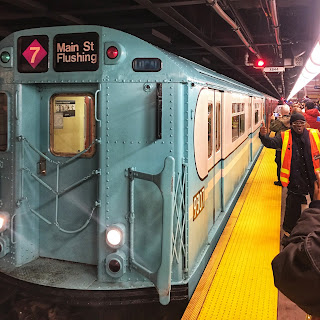 It's Throwback Thursday, so I posted this photo on Instagram tonight from two years ago, the first time Nancy and I had ever been to baseball's Opening Day (and the first time we ever descended the precariously steep escalator to the Hudson Yards subway station).

We rode one of the MTA museum's 7 Trains to Citi Field that day.

I happily snapped photos of the train's arrival, and we sat in one of the 50-year-old "redbird" cars.

My Uncle Charlie had taken me to my first MLB game on one of those same subway cars, arriving to then newly-built Shea Stadium, across from the World's Fair, and ascending to our seats in the precariously steep nose-bleed section of Shea Stadium.

That first ride on the 7 Train was a rite of passage for me, full of odd and eye-opening sights I had never seen as a boy growing up in the New Jersey suburbs. Things were different in New York, in a profound way.

Just like when I rode the train with Uncle Charlie in the 1960s, on Opening Day 2018 the tinny subway sound system played the hokey song "Meet the Mets" when we arrived at the ballpark station. That was a great day, and Nancy and I bought tickets for the Mets home opener in 2019... and Opening Day 2020 too.

New York is on lockdown. No one knows when the baseball season will start, and everyone grimly accepts this fact given the current life-and-death Covid-19 scenarios.

In "an abundance of caution," our New York City office, like so many others, has been closed these past two weeks. I haven't been to the city since Friday, March 13th.

My daughter is currently on lockdown in a Manhattan apartment, but she assures us she's fine. I keep wanting to drive to the city to "save" her, but I really think I want to drive there to save myself.

I'm very much in love with New York. I'm a little worried about how it will change in the coming months.

My Google Photos folder is filled with past images of the city. And, more often than not, these are the photos that Google's mysterious algorithm chooses to "auto-stylize." Here's an example:


In fact, here's an entire folder of 120 images of New York City that Google has auto-stylized for me (often, nostalgically, editing them in black and white).

When I've worked in New York these past few months, I've taken cell phone photos all the time. The city is full of beauty and life, architecture and art... and still odd and eye-opening sights.

Most recently, on March 11, I posted this photo on Twitter of Times Square and one of my favorite places, Grand Central Terminal: 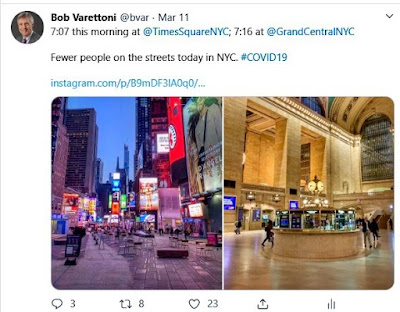 It was a Wednesday morning (evidenced by GCT's iconic brass and onyx four-sided clock). I was simply struck by how far fewer people there were than usual in pre-lockdown Manhattan.

A BuzzFeed editor saw the tweet and asked to add the Grand Central photo to the end of a story, "24 Shocking Pictures of Famous Places Before and After the Coronavirus Outbreak." All fine... until Complex Media re-posted the photo on Instagram in this way: In a little more than half an hour, more than 34,000 people had "liked" the post, but the comments were turning rapidly ugly.

Pictures don't tell the whole story, and there was certainly more context to the BuzzFeed post. In contrast, Complex's stark Instagram post looked... odd... showing Grand Central at an obviously different time. People were commenting that my photo was inflaming fear.

Magically, just as the photo began to go viral in a bad way, Complex deleted the post. So ended my brief reign as a perpetrator of fake news.

The lesson: a picture is (possibly) worth a thousand (misleading) words.

That is, unless it's a photo of New York City in the distance, without any words at all: 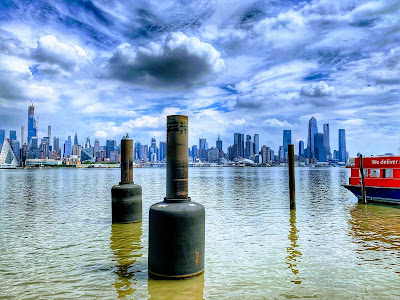 It's Snowing in New Jersey... 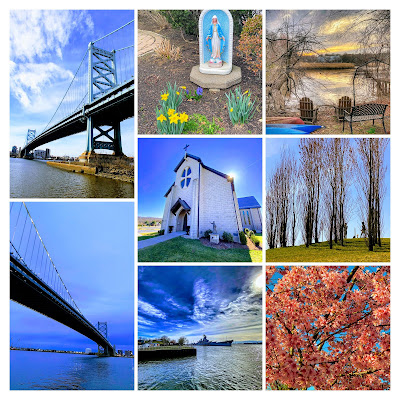 How are you coping with the new realities?

Working remotely full-time lately, I've been finding and using new ways to use technology to stay in touch with others.

Thanks especially to Sree Sreenivasan 谢斯睿, Steffen Kaplan (their mantra and challenge is to "Always Be Creating") and to this past Saturday's virtual Social Media Weekend conference sponsored by Pace University and Muck Rack.

I've also traveled around my home state of New Jersey, partly in efforts to care for Mom. For me, stopping along the way to take photos has been a source of joy.

Above are images that Google Photos' algorithm randomly auto-stylized over the past two weeks. It's an interesting theme. (Context/captions are posted on my Instagram sites: @bvarphotos and @foundinnj)

This morning's springtime snow isn't sticking to the ground. So I don't have any photos to prove it.

Instead, I'll sign off with this image of street art or graffiti or word from the prophets written on this sound-barrier wall along Route 80 yesterday in Paterson, as I was returning home from Mom's:

PS - Let me know if you want to talk or (remotely) visit: bvar@verizon.net

3 Days in Florida: What I Saw at Spring Training


Ever since spring training began, my fancy has turned lightly to thoughts of baseball.


I’m posting these thoughts about my first-ever spring training visit on March 5 – the infamous day, 48 years ago, that Jim Fregosi broke his right thumb during a workout. The Mets had obtained Fregosi in an off-season trade months earlier for Nolan Ryan, and their careers subsequently took very different turns, with Ryan winding up in the Hall of Fame.

So the life of a Mets fan, like life in general, is not always easy or fair. Still, I am eager for the arrival of the 2020 season and happily took photos of FITTEAM field as soon as I arrived…


My wife gently nudged me and asked if it was a good idea to be seen in an Astros ballpark with a camera pointed toward the batter’s box.

One theme of the weekend was the Astros cheating scandal. Fans everywhere chatted constantly about it. During the Mets/Astros game, fans were especially vocal, chanting “Beat the Cheats!” to the tone and rhythm of “Let’s Go Mets!” It’s anyone’s guess how long this hostility will last, but I wonder whether it will demoralize or galvanize the Astros players as the season progresses.

Another weekend theme was how nice people are to you when you wear Mets gear. No matter where we were -- at the ballpark, airport, hotel, in bars and restaurants, or walking the streets of West Palm Beach -- people would nod, smile, wave, or say “Let’s Go Mets!”

One Rays fan, an older gentleman, saw my Mets cap and bemoaned how much he’ll miss Marcus Stroman, who left the Blue Jays to join the Mets last year. As he kept talking, he revealed a schoolboy crush on Nikki Huffman, Stroman’s personal trainer, who he will miss even more.

Watching the Mets players interact up close gave me a hopeful feeling for the future. The players seem to genuinely enjoy each other.

The day before we left for Florida, mlb.com’s Anthony DiComo posted an endearing story describing how a group of Mets players have formed an impromptu “Cookies Club,” meeting up regularly after road games to eat peanut-butter cookies, drink 2% milk, and talk about baseball and life.

I saw evidence of this refreshing decency with my own eyes: Jacob DeGrom joked with the home plate umpire after leaving the pitcher’s mound following three innings of work. I’m guessing it was about the five strikes the ump had given the Nationals’ Michael Taylor in a previous at bat. And when muscular, fan-favorite Tim Tebow pulled back from barreling late into second base during a meaningless, late-game double play, Nationals middle infielders gave him a respectful, appreciative nod.

Even though today’s culture is so divisive, and cheaters evidently do sometimes win, I refuse to believe that nice guys always finish last. Give me Luis Rojas over Leo Durocher any day. I’ll take my chances.


Niceness is contagious, even if it isn’t yet a global pandemic. It’s amazing how friendly the Mets vendors and support staff are when we attend games in New York. That vibe extended to Clover Park, which has been newly renovated and mirrors some of the best features of CitiField (cheers, Jim Beam Bourbon Bar!).

Clover Park was more fan-friendly and comfortable than FITTEAM. Upon entering on Sunday, the guards let my wife through with a friendly wave despite problems with a wonky metal detector. We joked that had the same thing happened at Yankee Stadium, I would have spent the afternoon bailing her out from a Bronx detention center.


My Dad, a great amateur ballplayer in his own right, used to observe that, however old he was, he always felt he was younger than the major leaguers he watched on TV. In real life, that conceit is hard to maintain. All the players look young… and younger than on TV. They also seem bigger in real life; not like actors, who always seem smaller.

Today’s baseball players are in terrific shape and are the most talented in the world. I chuckle to myself when people claim that Babe Ruth would be just as effective today as he was in the 1920s. Back then Ruth’s opponents came from a small, sometimes out-of-shape, homogeneous talent pool who did not have the benefit of all the advances over the past century in health, nutrition and sports science.

Strolling past the left-field bullpen during the Rays-Nationals game, I heard what sounded like a gunshot, only to look down to discover it was the pop of a Jalen Beeks fastball hitting a warmup catcher’s mitt. Young Beeks’ stats suggest he’s so far been an average big-league middle reliever, but I wonder if Ruth had seen or heard anything like him.

My wife wore her “Scooter and the Big Man” T-shirt to Sunday’s game, which happened to be scheduled on Michael Conforto’s 27th birthday. The E Street Band reference in this case refers to “Scooter” Conforto and “Big Man” Pete Alonso.

It also happened to be deGrom’s first start of the spring that day (we were doubly lucky: having witnessed Stephen Strasburg’s first spring start on Friday).

It was quite a sight to see “Jake” warm up on the third-base sideline (I wonder why the Mets dugout is on the third-base side of Clover Park; isn’t the home team always on the first-base side?). All the other Mets pitchers gathered around to study/watch/admire deGrom’s seemingly effortless delivery. Catcher Wilson Ramos, who looks to begin the season in top physical condition, was squatting closer to the ground and setting a lower target than he did during the 2019 season.

Once the game started, deGrom made short work of the first three batters he faced: a great sign for the season ahead. Not only that, but Scooter and the Big Man came through: Alonso getting his first hit of the spring and Conforto hitting a birthday home run.

It was a memorable Sunday. Only one thing was missing: Where was Mr. Met?


Other things of interest?


In the end, my wife and I enjoyed our stay in West Palm Beach very much. It features inviting bars and restaurants, street art and musicians, and people who like to dine outdoors on Clematis Street in shorts and short-sleeve shirts in 53-degree weather.

We crossed the bridge to moneyed Palm Beach only once. I felt claustrophobic there, finding the architecture imposing and ostentatious.

Perhaps that’s where the owners of the Yankees live. 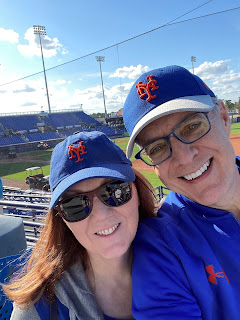