Another Memorial Day With Gatsby


Every Memorial Day weekend, I find a sort of tender curiosity in trying to repeat the past.

This morning's rain in New Jersey made for perfect weather to hunker down and re-read "The Great Gatsby" to celebrate the start of another summer.

It's hard to fathom how a slight, 91-year-old book by F. Scott Fitzgerald never fails to renew my love for great writing and the power of imagination.

The book is still more vivid than any of the familiar video marathons that might have entertained me on another weekend -- James Bond on AMC, "Jaws" on IFC, the black-and-white war movies on TMC, or even tonight's "Roots" simulcast on A&E/Lifetime/History.

You'll never see a "great" Gatsby movie. Video can't capture the imagined sight of Gatsby holding out his trembling arm to the green light, or the grand artifice that Gatsby built to try to reconnect with Daisy.

It's not a plot-driven thriller, either, like "The Girl on the Train." I find it episodic, and dream-like. So I took exception to a tweet I saw this afternoon from Jon Winokur (@AdviceToWriters). He quoted this advice from Lisa Cron, an accomplished writing instructor: "Storytelling trumps beautiful writing, every time." 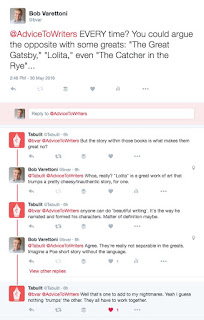 As Maureen Corrigan wrote recently in her own book about the benefits of re-reading Gatsby, "Anytime you try to explain to someone who hasn't read it what 'The Great Gatsby' is 'about,' the book fades into just another novel about love gone horribly wrong... Flailing around, you fall back on the truth: that maybe it's not so much the plot of 'Gatsby' that makes it great but the way it's told, that incredible language."

In literature, style matters. Otherwise, you can dismiss this book as about a guy who's been obsessed with a woman, now married to another -- and he's rich now and trying to win her back. I'm sure he's got a great Facebook and social media profile too, with plenty of party photos.

Once, in driving my daughter home from college in Washington DC, I suggested that we listen to the book during the car ride. She loves "The Great Gatsby" as much as I do, and we thought we'd be able to hear the whole thing in one sitting.

But traffic was light, and things abruptly ended in the smouldering hotel suite at The Plaza. At that point, there was still the possibility Gatsby might end up with Daisy -- and my daughter was just as happy that the story ended right there.

"As far as I'm concerned, Gatsby never went for a swim before they closed up his pool," she said.

We laughed. While barreling up Route 95, we had just seen our share of real life passing by. But that's no matter. Listening to "The Great Gatsby," we both knew that America is still a land where happily ever after is still remotely possible.

A Beacon of Hope for Lesser People

Disrupted: My Misadventure in the Start-Up Bubble by Dan Lyons


Looking for a scary read this Memorial Day weekend? Try “Disrupted: My Misadventure in the Start-Up Bubble” by Dan Lyons.

His memoir is far scarier than anything I’ve read recently by Stephen King – and it’s also funnier (thinking back to the author’s description of how a newsroom might react to Molly the teddy bear) than most anything I’ve read or seen recently, except for HBO’s “Silicon Valley.”

Wait. Lyons is a writer for “Silicon Valley,” and he was also one of my cultural folk heroes from the mid-1990s when he blogged as Fake Steve Jobs. So the “funny” part is understandable.

But why is this book scary?

Because good satire is always scary – and this is a tale of ageism, greed, abuse of power and double-talk. Because it raises important questions, yet again, about the stability and underpinnings of U.S. financial markets. And, finally, because there’s a scene with the author’s young son that chillingly portrays the impact of job loss on family life.

But what of all those young HubSpot workers – the real people (innocent bystanders?) seemingly caught in the middle of this tale?

I feel for them all. And I’m scared for them too.

In the end, Lyons is a solitary figure, fighting against time and seemingly always misunderstood. He winds up paranoid for his family’s safety and worried about his children’s future.

But the very fact that he’s fighting his battles with wit and insight gives me hope.

To steal a favorite closing line from “Mistress America,” a recent Greta Gerwig/Noah Baumbach movie: “Being a beacon of hope for lesser people is a lonely business.”


View all my Goodreads reviews

Here's an image of street musicians performing earlier this evening in Albuquerque, NM... 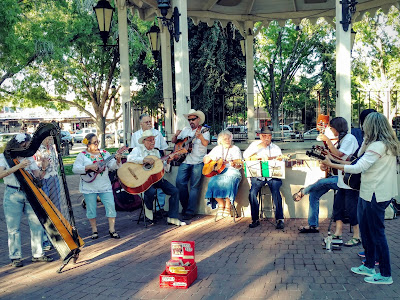 Last night, I was in New York, and this was the scene as described the "NY Business Journal": "Live performances by Demi Lovato, Wiz Khalifa and Snoop Dogg — in front of a capacity crowd at the South Street Seaport on Tuesday night — certainly helped Verizon-owned AOL stand out among the herd of tech companies in town showcasing their tech. The Tim Armstrong-led company also peppered its audience with its latest high-tech offerings and product launches."


Originally posted on my Instagram feed.
Posted by Bob Varettoni at 9:48:00 PM No comments:

"I came away with a much deeper and more profound appreciation for the only parents I knew. My only regret is that they never lived to hear me say that. There was never a good time."

Never A Good Time: A Memoir by Jack Hoey
My rating: 5 of 5 stars

Do yourself a favor. Buy this book and read it before Mother's Day. When you get to the line in Chapter 14 that begins, "I thought about you every day of my life..." well...

My heart skipped a beat. And, full disclosure, I also enjoyed reading this short book because it was written by a former colleague who's an excellent writer. These stories are real, and it doesn't get any better than this, Jack.


View all my Goodreads reviews