Remembering MLK in Paterson, 50 Years Ago 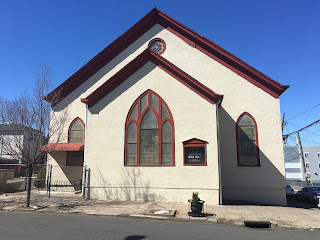 Yesterday a local newspaper feature story inspired me to visit a modest church on Auburn Street in Paterson, NJ.

It's the site where, nearly 50 years ago today, the Rev. Dr. Martin Luther King Jr. spoke for 20 minutes before traveling to Memphis, where he delivered his memorable, prophetic "mountaintop" speech on April 3 -- and where he was assassinated on April 4.

According to Richard Cowen's story in The Record, King's next-to-last speech on March 27, 1968, drew thousands of people who jammed the sidewalks as his motorcade, arriving from Newark, "finally turned the corner onto Auburn Street and made its way to the old wooden church where the sound of gospel music swirled through the rafters like incense."

The rest of the story about that late March night in Paterson is an outstanding example of local journalism, complete with a photo gallery, video and podcast. It reminded me of the fact-based, detailed front-page story in The Washington Post on Saturday morning before the March for Our Lives in DC (where King's 9-year-old granddaughter stirred a crowd of hundreds of thousands).

In fact, this same Saturday, some streets near Auburn Street (which has been officially renamed Freedom Boulevard, although there are no markings of this) were closed on the day of my visit because of a march to honor gun-death victims.

It was simply coincidental that this annual march in Paterson -- held on the Saturday before the Christian holiday of Palm Sunday -- was taking place on the same day as student-led protests held throughout the world to call for an end to gun violence and mass school shootings.

This is Paterson's heart-breaking reality: The modest Bethel A.M.E. church on Auburn Street/Freedom Boulevard was fenced-in and locked, and a resident quoted in Cowen's story noted that she does not feel free living here, due to the high crime rate of the area. She will not allow her son to walk to the library by himself, even though it is less than five blocks away. (Also, within a short distance from comfortable, upscale suburbs.) 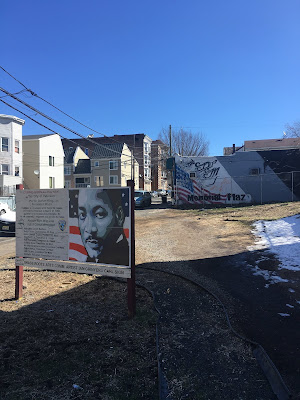 Across the street from the church, a sign states that a park in Dr. Martin Luther King Jr.'s name is "coming soon." However, this plot of land and sign have been unattended for four years.

Just last week, according to The Record, the city tried to auction one of the two lots set aside for the park -- until Councilwoman Ruby Cotton, who represents the neighborhood, put a stop to it.

Said the Rev. Allan Boyer, the church's current pastor: "I'd like to see a park for kids, with some cherry blossom trees, and some quotations from King, so they could learn about him."

Meanwhile, Cotton has committed to building the park.

I believe she will succeed, and I'm going to see what I can do to help. After viewing yesterday's video of King's granddaughter, I have a little hope.

I believe that next March I will return to the same corner to take photos of some cherry blossoms. 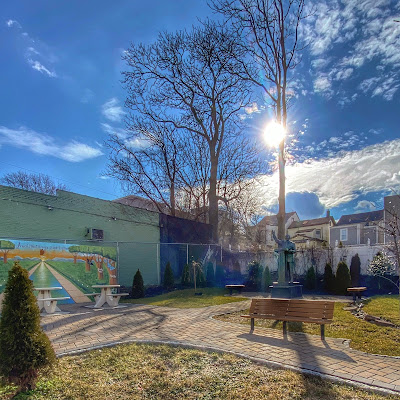 A Visit to Princeton... In Real Life

Yesterday, 41 members of the mighty Black Glass Gallery, a social-media-based photography community, gathered on the Princeton University campus on a cold afternoon... just to take photos and spend some time together in real life.


I'm the guy without a hat on, next to hooded Jimmy whose hands are on the light pole. Unlike many of the pros and artists in this photo (whose work you can view at www.blackglassgallery.com or by searching #BGGmeetup on Instagram), I'm not a photographer in real life.

Still, the virtual gallery's real owner, Suzanne, has always been kind and supportive -- and with the aid of an iPhone, a Canon Rebel and some advanced, yet simple-to-use editing software, I can be a virtual photographer too.

The photos below are mine, including two views from the Princeton Chapel choir loft, some natural greenery on St. Patrick's Day, and the iconic Holder Memorial Tower: 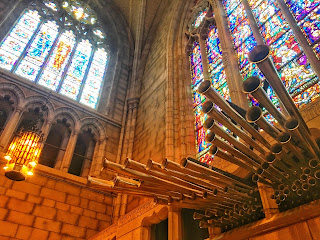 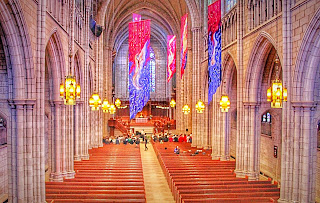 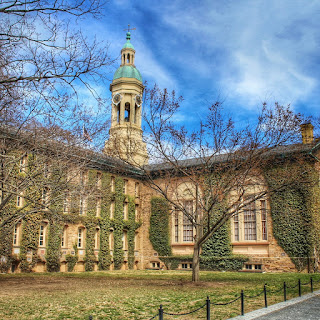 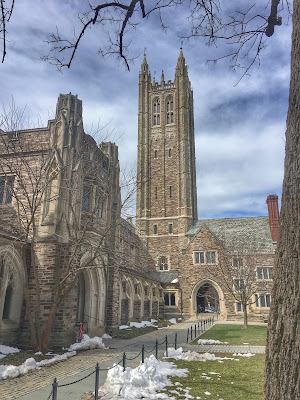 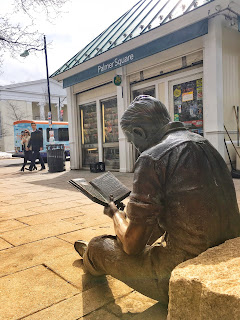 I had intended to post a writeup here as a sort of virtual campus tour.

But, here in 2018, I also realize there are whole-campus, 360-degree virtual reality tours online, with VR representations of real student guides. There's just such a guide to Princeton among the 600+ campuses (including more than a dozen other colleges in New Jersey) featured on YouVisit.

I can't compete with that in a blog post. This post is "analog digital," just a handful of images of a beautiful cold day in March 2018... like the bronze man in J. Seward Johnson's "Out To Lunch" statue in Palmer Square who's reading something that isn't a Kindle.

The Best Music You May Never Have Heard

Last Thursday, at the Mercury Lounge, I saw folk-rock future. Its name is Parsonsfield.

With apologies to Jon Landau, on a night when I needed to feel young, the band made me feel like I was hearing music for the very first time.

This was the fourth time I’ve seen Parsonsfield perform, and each night I’ve headed for home afterward feeling renewed. It’s a wonder:


On Thursday, the New-England-based band (I first saw them in Wellfleet on Cape Cod) performed in the East Village to mark the release of “WE” – an EP that includes the single, “Kick Out the Windows.”

In a world of instant fame, often obtainable without any achievement, it’s amazing how many talented people – especially musicians – spend their careers flying under the radar.

Closer to home, I think of my grandmother’s brother, the late Angelo Mairani. I recently found black-and-white photos of him, along with frayed, yellow reviews of his piano playing from a New Jersey newspaper that no longer exists.

Uncle Ange played piano on local radio stations in the ‘40s and ‘50s – but there’s no record of this online, or recordings that I can find.

Still, I remember as a boy the ornate wall of sound Uncle Ange could create from my grandmother’s old piano. I remember the joy with which he played, and the joy he brought to others when he did. It was music as pure celebration -- a sound that pushed out the walls and made all our lives seem bigger and more hopeful.

Certainly, the band has already had success -- critically acclaimed and selling out smaller venues for several years. Their songs are easily found online. “Weeds or Wildflowers” was featured in an episode of “The Walking Dead,” and videos even include a cover of Mississippi John Hurt’s “Let the Mermaids Flirt With Me.”

I think Parsonsfield deserves even more success, and an even brighter future.

The same applies to the band’s opening act at the Mercury Lounge (Scruffy Pearls, featuring lead singer Carly Brooke), and to Kyle Hancharick, whose earnest, soulful cover of my favorite song, Springsteen’s “Thunder Road,” gave me goosebumps during a performance at an out-of-the-way winery in Rockland County, NY.

And especially to Ireland’s Ryan McMullan. It’s almost otherworldly how good he is. I’ve seen him perform in small settings, and I was in awe. I think Ryan will do OK, though. He’ll be the opening act when Ed Sheeran tours Australia later this month.

Who is your own favorite talented, under-recognized musician?

I think Uncle Ange should be the patron saint for all of them. And I think the prayer we should offer up to him on their behalf should be the words to the chorus of Parsonsfield’s new single: 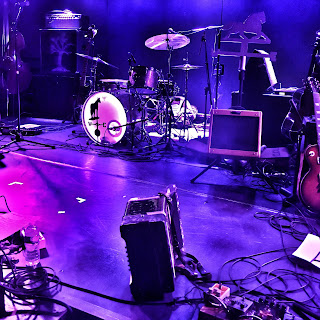 Do you have March 4, 2018, (notice the comma after the appositive year) marked on your calendar as Oscar Night?

To mark this anniversary, I think Ms. Brockenbrough should win an Oscar for Best Original Awareness Day. I also think tonight's award should honor the memory of Syd Penner, legendary copy editor for the New York Daily News in the Jimmy Breslin era.

I've previously posted about kind, patient and erudite Mr. Penner, who, after retirement, dressed in suit and tie for a weekly visit to the offices of then-NYNEX at 1095 Ave. of the Americas in New York. He would critique and copyedit the press releases and other writing samples of then-me and my colleagues in the Public Relations department.

I treasured every red mark Syd Penner placed on my work. He pointed out grammatical flaws, wordiness, jargon. He also wasn't a fan of adjectives.

Those pages have long since been recycled. Everything went digital. I've moved offices. And, last year, I moved into an open work environment. Just like a newsroom in the Jimmy Breslin era. Kinda.

The point being, in de-cluttering my life before moving from a physical office, I came across a physical copy of the November 29, 1979, issue of The Printer's Devil (Vol. 1, No. 13). This, as noted by journalist Paul LaRosa, was Syd Penner's occasional, internal-to-the-Daily-News newsletter that celebrated stories he liked and knocked those he didn't.

(Note: Wikipedia offers an informative definition of "printer's devil," complete with a link to a related "Twilight Zone" episode, available on Hulu and starring Burgess Meredith.)

This sample of The Printer's Devil is from the late Mr. Penner's personal files. He had given it to me because I kept hounding him to tell me stories about life as a journalist in the '60s and '70s.

I offer it to you here, in celebration of National Grammar Day: 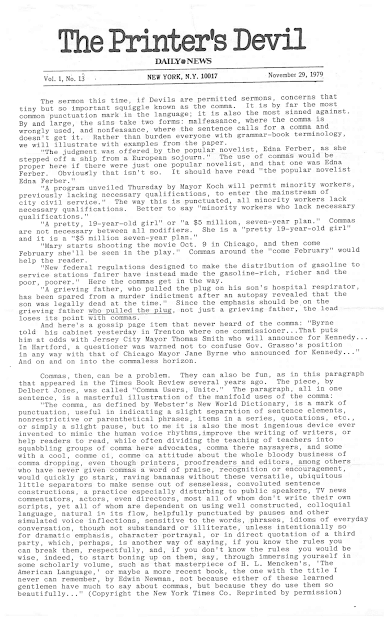 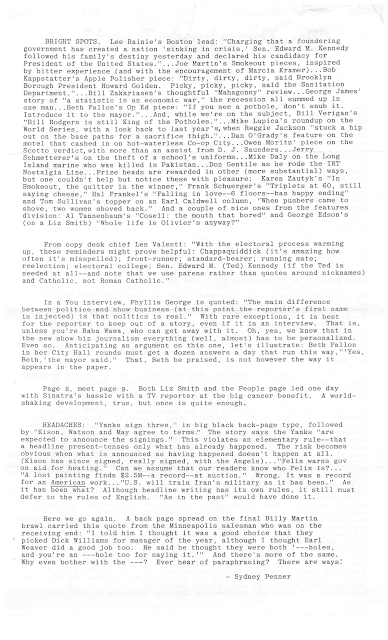