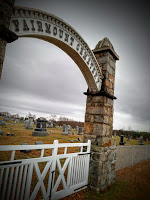 On a gentle bluff overlooking sometimes un-trafficked Route 517 in Tewskbury, this cemetery is thrice removed from any easy Internet search. For one thing, there's a much larger Fairmount Cemetery in Newark. For another, even this site is different than the Fairmount Presbyterian Church graveyard, just across the street. And finally, even the church across the street is often confused with another church -- currently up for sale -- just up the road at an intersection with a traffic light.

When I visited yesterday, I said a prayer at a gravestone etched with the image of a soldier, Brian Varsalone, who died before his 26th birthday in 1992. An hour later, Google hauntingly sent me a message that it had auto-edited the photo I took there.

The gravestone read, "I am home in heaven, oh so happy and so bright. There is perfect joy and beauty in this everlasting light..." 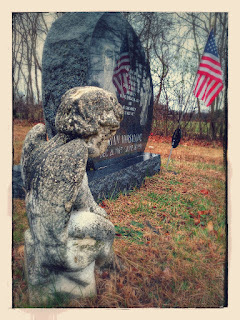 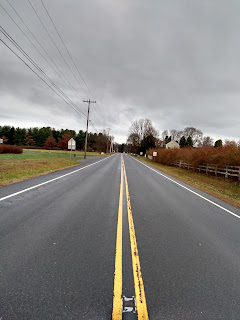 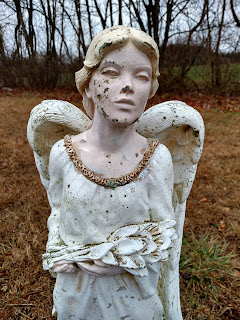 View other photos I took of Fairmount Cemetery here. 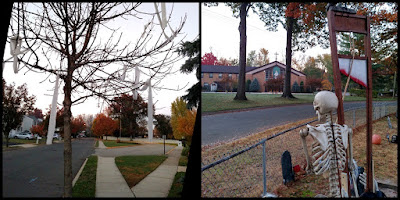 This morning, seemingly in the blink of an eye, the trees were already bare in my hometown.

Just one week earlier, their branches had been ablaze in contrasting shades of red, yellow and brown. But as Election Day dawned, only streams of toilet paper remained on the tree outside the polling place at the library.

This particular tree had been teepeed in the tradition of Goosey Night (or Mischief Night, if you're not from Passaic County), the night before Halloween. There's no longer any widespread evidence of Goosey Night pranks in litigious 2015, however; just neighborhoods letting their children playfully mark their own property.

Seasons change; times change -- yet inside the library I was greeted by the same group of Election Day volunteers who I see year after year. None were young more than 20 years ago, when I first moved here, but none seem to have aged in the meantime.

It's as if people who volunteer at the polls have somehow managed to suspend time -- the same way the waiting list never seems to winnow at a nearby nursing home where a relative hopes to soon reside. In New Jersey, if you want to live forever, just get your name on the waiting list for Marian Manor.

After voting, I noticed pagan and Christian images competing with each other on a nearby street. An elaborate Halloween lawn display has been set in the shadows of Ascension Church.

This is New Jersey. Nowhere else in America are so many contrasts in such close proximity to each other. My home state is a land where rural, suburban and urban extremes coexist almost side by side. It's also a land of paradox, where everything changes quickly and nothing changes at all.

On Instagram (@bvarphotos) and Tumblr, I explore and document my love for the state, and I invite you to follow me there.

Meanwhile, another morning in New Jersey has come and gone. It leaves me hopeful, because I know things can change in an instant here and there's something unexpected around the next corner.

As our poet-laureate sings, "Show a little faith, there's magic in the night."

Let's Eat, Drink and Be Merry... and Celebrate All Souls

With apologies to my life coach, Crash Davis, I’d like to point out that All Saints’ Day, Nov. 1, is boring. Besides that, it’s fascist.

All Souls’ Day, Nov. 2, is democratic. It’s the liturgical Festivus for the rest of us.

Like people in other cultures, I believe that the spirits of my dead ancestors are always surrounding me. Which probably explains why I need a life coach.

It also explains all my odd family customs around food and drink.

For example, this past Oct. 9 – on what would have been John Lennon’s 75th birthday – my family had hot dogs and beans for dinner, with fudge marble cake for dessert.

That’s because Oct. 9, 2015, also marked what would have been Patrick Cullinane’s 55th birthday. He’s my wife’s brother, the nicest guy I’ve ever known. He died of cancer 16 years ago, and this was his favorite meal.

On Oct. 24, 2015, on the 10th anniversary of my Dad’s death, I sat down at Dad’s favorite diner, the Tick Tock in Clifton, NJ (not far from Varettoni Place). I ordered his favorite meal: eggs over with sausage, home fries, rye toast and coffee.

The older I get, the more I can taste the past.

I can’t take a bite of black licorice without thinking of Dad’s father, whom I called Nonno. My grandfather was a great fan of the New York Mets in the 1960s, and I have fond memories of him in his easy chair while watching baseball on TV.

My wife is also a longtime Mets fan, and she sometimes inadvertently pantomimes him – and her own grandfather – when she gets angry while watching Mets games on TV because no ballplayer these days knows how to lay down a sacrifice bunt.

Her airing of grievances – in imitation of Nonno – proves that honoring the dead has nothing to do with heredity. Instead, it is inextricably linked to our salvation.

On the occasion of the 10th anniversary of my Dad’s death, my Mom had a Mass said in his name at St. James parish in Totowa, NJ. My sister took a red-eye flight from California to attend – and we had both ordered eggs over with sausage, home fries, rye toast and coffee at the Tick Tock Diner that morning.

During the homily at the memorial Mass, a priest claimed the Gospel passage contained proof of Jesus’ historical existence: The fact that the beggar who approached Jesus had a name, and even referenced his father by name, was the kind of significant detail that had the ring of truth.

Later, at the same Mass, there were more important words that brought home a larger truth to me.

The priest raised the host at the moment of consecration and said, “Take this, all of you, and eat it... Do this in memory of me.”

So let's eat and drink and celebrate to honor our dead.

With both joy and sadness in my heart, I offer an All Souls’ toast to Dad and Uncle Pat, Nonno and Nonna, my Mom’s brothers and sisters, and all the dearly departed in my life.

Although they would never presume to call themselves saints, I know that – as long as I am alive – they will never die.