November Reviews: The Boys in the Boat and The Sarah Book

T.S. Eliot was wrong. November, not April, is the cruelest month. Especially if you, like me, happen to be a fan of Notre Dame football.

I’m definitely not a fan of the cold weather, the dying leaves, all the reminders of mortality.

One good thing I have to say about the month is that it provides the perfect backdrop to read or listen to a good book. I gave two a try over the past few weeks. One, I liked unreservedly; the other left me wondering. Which isn’t necessarily a bad thing either, I suppose.. so forgive me, Scott McClanahan, for this lesser mortal's snarky attempt at imitation. Blame it on November.

The Boys in the Boat: Nine Americans and Their Epic Quest for Gold at the 1936 Berlin Olympics by Daniel James Brown
My rating: 5 of 5 stars

Last month I posted on Facebook looking for a book recommendation, and several friends recommended “The Boys in the Boat.”

When I read previews of the book, I wasn’t sure what to expect. It was a long book, about a topic — competitive rowing — in which I had not even an iota of interest. It was a true story, but set more than 80 years ago, and all the people involved in the drama are no longer living. So what did my friends see in this book that I didn’t?

Gradually, I was pulled into the story — and then I became enthralled.

This is a great book. It’s what story-telling is all about: it enlightens; it entertains; it expands horizons. The writing brings the past — notably, the Great Depression and the Berlin Olympics — back to life, and the research that went into this is astounding. Maybe the story was a little too perfect in the retelling, maybe the life-lessons are a little too pat… but, oh, what a terrific time I had along the way.

I even followed this up by watching the PBS “American Experience” documentary, “The Boys of ‘36.” It was interesting to see real-life footage of the same scenes that appeared in this book. The thing is, the book was even better.

The Sarah Book by Scott McClanahan
My rating: 3 of 5 stars

I have a car. I was listening to this book while driving my car. My wife was with me. “What's that?” she asked. I told her it was an audio book. An audio book called The Sarah Book. My wife said, “It’s an audio book?” “Yes,” I said. “It’s called The Sarah Book.” “It sounds like it’s written by a third-grader,” my wife said. “It isn’t,” I replied. “Well, it’s the way kids in my third-grade class would tell stories,” she said. “Just one thing after another. It’s very repetitive.” “Well,” I replied, “It’s actually a very well-reviewed book. And it’s short. I’m trying to keep an open mind about it. Everyone loves it.” Everyone but my wife.

Then the author continued reading in his mesmerizing drawl. It wasn’t one of the good parts. I had heard some good parts, but this wasn’t one. This part was about an old dog, and I couldn’t tell whether it was supposed to be humorous, pathetic or ironic. Or whether it mattered. I had thought some parts were poetic. Maybe I was wrong. Maybe I was right. Maybe my feelings are just a metaphor for life, and we’re all trapped inside this book review. All of life is just one big book review, and we don’t even know if the author is reliable or not. Did he really take his kids on a joyride while drunk? I don't think we can ever be sure.

So I need you to forgive me. Also, I know I’m using the word “I” a lot. I’m just warning you: if I were you, and I purchased this book, I would get used to it. Anyway, I know that all is lost. Everything we love will be lost. So what does it matter?

View all my Goodreads reviews

One Week in New Jersey 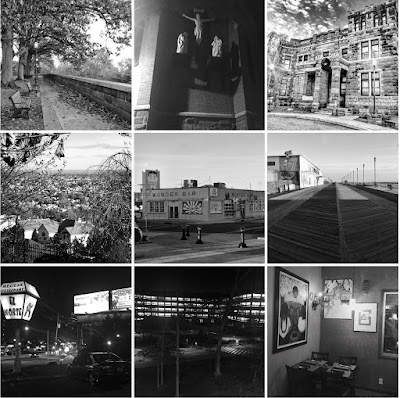 Holy TMP! This Press Release May Save Your Phone

This iPhone is dead, right?

Its screen is cracked; its insides are showing. It's unresponsive.

Here’s how to protect yourself when your phone’s screen (be it iPhone or Android or Windows) is cracked and seemingly beyond repair: Get a mobile device protection plan.

I mean, pardon the commercial interruption, but there’s a great deal on something called Total Mobile Protection (TMP) that Verizon is offering until Nov. 17.

You should really check it out. NOW.

A few weeks ago, I told the story here of how I was tripped up by supernatural forces and landed on my iPhone to break my fall. Sadly, I could not revive the device, so I put it in a drawer and transferred my number to a trusty old Droid. (By the way, despite the fact that I work for Verizon, I'm not automatically given new phones... we make sure all the latest/greatest phones are made available to customers first.)


...by my Seattle-based colleague Scott Charlston. He told me he was arranging screen-repair demos in the New York area with Asurion, a company that provides insurance services for wireless devices, and that Andrew Testa, who works in the same office I do, would be happy to take my phone to see if it could be fixed.

A few days later he tweeted these before and after photos of "Pete from Asurion," who Andrew was evidently holding captive in a suburban garage... 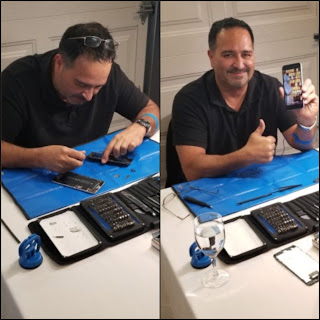 Unbelievably, he fixed it!

Pete from Asurion raised my iPhone from the dead!

I only hope that someday Andrew lets him out of that garage. Pete really deserves so much more than the current $29 TMP deductible.

...The home screen is a photo from the Grotto on the Notre Dame campus. There's a story behind that too, but that's for another blog post on another day. Some day after Notre Dame plays Miami later tonight.