On the street, kinetic energy changes form. Motion takes shape in art; art becomes fashion; fashion returns to energy. The homeless appear, then vanish, the way the rich eventually will. Monuments have all lost their meaning, and even the streets have changing names.

From above, we can see the world in context, so much bigger than our lives. We see the new Dover Beach. At sunset, the light gleams and is gone, retreating to the manmade lights, casting shadows on all our ghosts. 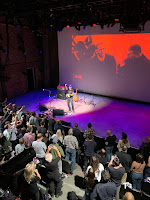 This is a photo of the talented Tom Morello performing last night during a great show in Manhattan.

He asked the audience to jump up and down during one song, so I started hopping like an idiot. Then I noticed my wife standing perfectly still beside me.

She said, “I’m not going to jump just because someone told me, and I think Tom of all people would respect that.”

The song repeats the lyric, “And now you do what they told ya,” so perhaps people were jumping ironically. Perhaps.

But, definitely, this is 100 words about why I love Nancy.

On a blank page,
I am bold.
The way you always wanted me to be.

I can dance.
I can level mountains.
I can fly.

On a blank page,
time has no power over me.
I am not fading away; I am forever young.

On a blank page,
I can create worlds.

I conjure you at will.
Change past and future.
Erase our memories.

On a blank page,
you don’t matter to me.
You have no power over me.

On a blank page,
I can do anything.

Roses in September: A Visit to Summit 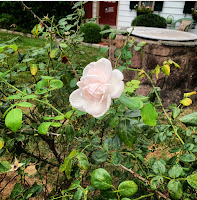 Last week a single pink/white rose bloomed at the entrance of my driveway, reminding me how desperately everything clings to summer.

In New Jersey, there’s always a second flush of roses in September.

It’s a heart-warming sign of hope, one that inspired a visit to the Reeves-Reed Arboretum in Summit.

The arboretum is highlighted with vibrant colors at summer’s end. As its website promises, every season there’s something new to explore.

Below are a few photos I took of the grounds in early September, and I’ve posted more here: 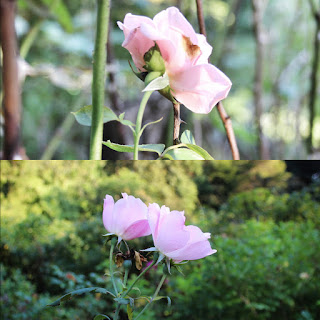 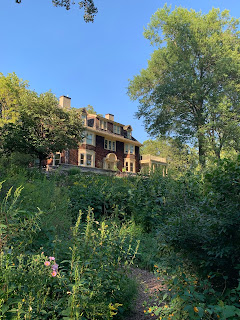 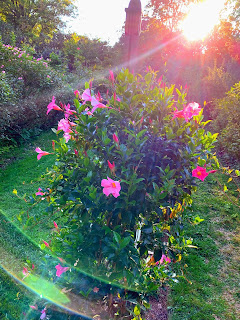 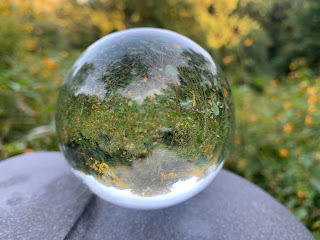 September is my favorite month. Full of curious sites and wonders. I was born in September, and I was married in September. During the ceremony 33 years ago this weekend at St. Mary’s Church in Nutley, Nancy and I presented roses to our mothers at the time of the greeting of peace.

This September, there’s a single pink/white rose in bloom at the entrance of my driveway. It reminds of a poem I wrote for my bride, with apologies to Sonnet 130:

Alas, alack, I have to disagree
with Shakespeare: my love is rare -- her hair red,
like an Irish setter's, and her eyes green,
the envy of the cat beneath my bed.

I see, in her reflective gaze, nine lives --
defying death (despite devout clichés),
perchance to live forever in this rhyme.
Her form belies my unpoetic ways.

If God's Own eye is something like the sun,
then true love is a flower, I propose.
And my love is a dozen, minus one.
Imperfectly inscrutable: one rose,

I’ve added this post to the page “32 Stories About Places in NJ.” Visit there for more stories and images from around the Garden State.

9/11: A Lesson in Accountability

There is no such thing as accountability if you do your job and the next person can't do their's. Accountability means we all win together. 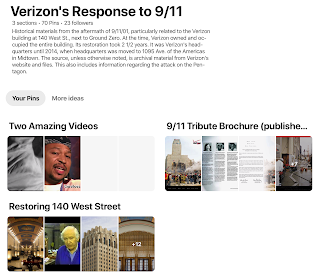 As the anniversary of 9/11 approaches, I again updated a Pinterest site I've been curating to preserve stories about Verizon's efforts to restore communications services following the terrorist attacks.

The site includes links to treasures in a variety of media, including a 38-minute video about the heroic colleagues I was proud to work beside in 2001.

One new link is Maria Bartiromo's interview on last year's 9/11 anniversary with Denny Strigl, the former CEO of Verizon Wireless. He talked about the tech sustainability "lessons learned" in the aftermath of the attacks.

Another lesson learned was articulated this past May by Verizon's former Chairman and CEO, Ivan Seidenberg. Having written "Verizon Untethered," a history of the company, Ivan sat down with entrepreneur and Internet personality Gary Vaynerchuk to promote the book on the #AskGaryVee YouTube show.

Here's a link to the show, if you aren't already one of Gary's 2.2 million subscribers. It's a fascinating 51-minute interview on a variety of business topics. At the 29:15 mark, Ivan begins talking about a favorite chapter in his book: "the story of how our company was able to deliver after 9/11."

In the end, this story is an important life lesson about the meaning of accountability. Here's a partial transcript of what Ivan had to say. It speaks for itself:

All of Wall Street was out; all of Manhattan was out... The next morning: still flames, still trying to look for survivors. Calls began coming in from all over the country about, "When is the Stock Exchange going to be up and running?"...

The trading partners on Wall Street... couldn't get their people into the buildings. They didn't have alternative locations. So, I remember Dick Grasso, who was the Chairman of the Stock Exchange at the time, called a meeting of everybody in the city...

Our people basically said, "We could do the following, but here's all the things you will have to do"...

The story here was great. We were running cables out of [the windows of] buildings. We were doing all sorts of things that we needed to do. But we were also helping other people do their jobs.

We ended up committing to getting the Stock Exchange up and running the following Monday. In the process of doing that, we developed relationships with the top 60 or 70 trading partners -- the Goldman Sachs, the Merrill Lynches, all those companies -- to help them make sure they could open their facilities, they had enough circuits to get things done, they had the generators and the power, and everything else that needed to occur to get the country up and running.

It was one of the greatest experiences of our careers, because it was a big deal... and it taught our company, back in 2001, what real accountability is.

In Paterson, A Wall That Brings People Together 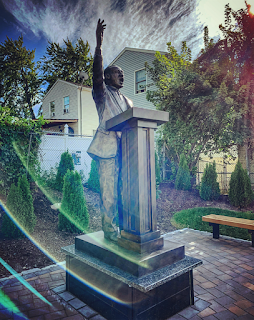 On August 28, 2019, a small ceremony in a small corner of Paterson, NJ, rekindled the spirit of the Rev. Dr. Martin Luther King Jr.’s “I Have a Dream” speech.

Exactly 56 years after King challenged all to create a better world, a community came together to open a beautiful park on the corner of Auburn and Governor streets in what had been a blighted vacant lot.

I’ve visited and written about this community project before (in March 2018 and January 2019). Here are side-by-side photos of the park across the street from Bethel A.M.E. Church, where King visited in 1968, days before he was assassinated. I took the one on the left last year; the one on the right, yesterday. 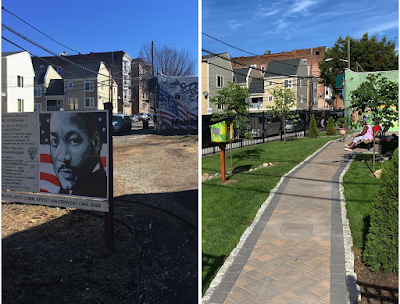 The new park has two centerpieces: Stan Watts’ eight-foot bronze sculpture of King (pictured at the top of this post), and a colorful mural, inscribed “A Wall That Brings People Together,” painted by Paterson students Jonte Silver, Isaiah Stevens, Alberto Bustos and Claudia Clark. The park also features newly planted trees and flowers, chess tables and a Little Free Library.

You can read the whole story here by The Record’s Richard Cowen and in this account by TAPintoPaterson’s Ed Rumley. Several groups and individuals funded the project. Separately this past week, director Steven Spielberg -- in town to remake “West Side Story” -- made a substantial donation to improve Paterson parks.

Amid all this good news, Cowen adds this context:

“Fifty-one years after King’s visit, the corner of Auburn and Governor streets remains a dangerous place. The poverty that King saw as the root of racism pervades Paterson’s mostly black 4th Ward, along with the drugs and violence that accompany it. But the new park… is a respite from all that. It’s not just a symbol of hope; it’s a real place, an example of what can and does happen when people work together.”

Echoing King’s final plea on August 28, 1963, to “let freedom ring,” Queen challenged all to “let the bell ring for justice… for love… for equality.” 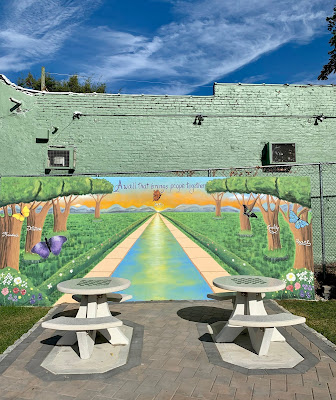