Using the new #LayoutFromInstagram app to display photos from the #NewBridgeLanding #historic site in #Hackensack #NewJersey
A post shared by Bob Varettoni (@bvarphotos) on Mar 23, 2015 at 12:51pm PDT

Red #barn and #plough at #NewBridgeLanding this afternoon in #NewJersey. #nofilter
A post shared by Bob Varettoni (@bvarphotos) on Mar 22, 2015 at 1:41pm PDT

Counting the Cars on the New Jersey Turnpike 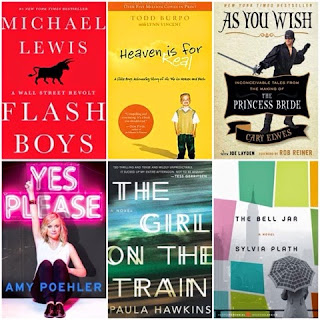 Flash Boys: A Wall Street Revolt by Michael Lewis
My rating: 4 of 5 stars

Following are six book reviews in one... Here's the thing: I've recently neglected Goodreads, and I haven't posted any reviews here since my mild diatribe about Graham Nash's autobiography, Wild Tales: A Rock & Roll Life. Oh, I still stand by what I wrote, but it now seems shrouded in a distant past.

Fresher in mind are the books I've enjoyed over the past three months (and a big plug here for www.audible.com, which makes my traffic-filled commutes and gym Stairmaster sessions tolerable). There are six in all, starting with "Flash Boys," which I enjoyed greatly and would heartily recommend. Michael Lewis is a wonderful writer, and every other book here gets 4 stars just by association with him.

How to dispatch the rest? Well, I've picked the titles at random, in pairs beginning with "Flash Boys," to post three short observations about each set and point out a common denominator. It's my new parlor trick… fractured book reviews:

Flash Boys: A Wall Street Revolt / Heaven is for Real: A Little Boy's Astounding Story of His Trip to Heaven and Back

Both these books are about time. One is measured in microseconds; the other in eternity. Reading “Heaven Is for Real” was an easy sprint… and the movie adaptation happened to be playing on cable at the same time. So I listened to the book one day and watched the movie the next. The movie is much better; it's not great, but it could have been a disaster, and it made me cut the book some slack… given the childish/childlike descriptions of Heaven. “Flash Boys,” on the other hand, was a delight to savor. The moral of both? Salvation, in this world, is unobtainable in any form. And everything, ultimately, is just a matter of faith.

As You Wish: Inconceivable Tales from the Making of The Princess Bride / Yes Please

These two books remind me how hard people work to get to the top of their professions. “The Princess Bride” is one of my favorite movies, but I had no idea how much care, time, effort, planning and talent went into its making until reading this tribute by actor Cary Elwes. Meanwhile, Amy Poehler, it seems, didn't spring up fully formed on “Saturday Night Live.” She spent thousands of hours perfecting improv and comedy -- the way Steve Martin in “Born Standing Up” described playing thousands of club dates before he became an “overnight success.” Or the way the Beatles played hour after hour on stage for years to develop their distinctive sound. Both books also benefit from the audio format, since both include entertaining cameos from guest voices. My kids may well someday read versions of these books featuring holograms.

The Girl on the Train / The Bell Jar

Both, it turns out, are first-time novels. “The Girl on the Train” has become a respectable current commercial success, and “The Bell Jar” is a well-respected literary success from 50 years ago. Both (despite the new technology evident in “Train”) have a timeless quality too – a mark of their two talented writers. Both books, however, are filled with what I found to be not very likeable characters… main and otherwise… so it was hard for me to care much about them all in the end. It's true, Sylvia, and there's nothing you can do. I couldn't relate to you. Yes, even you.

View all my reviews
Posted by Bob Varettoni at 5:29:00 PM No comments: