The Turn of the Screw by Henry James
My rating: 1 of 5 stars

There appears to me, moreover, as I look back, no more telling aspect of this book review more extraordinary than the mere fact that, in spite of my tension and increasing anger at Henry James’ writing style, I literally saw it through to its damnable conclusion. Adorable as was the sound of Emma Thompson’s voice in truth, I now reflect, that I had, in a seemingly imperceptible manner, even grown to hate her too!

Would exasperation, however, if relief had longer been postponed, finally have betrayed me? It little matters, for relief arrived. I call it relief, though it was only the relief that a snap brings to a strain or the burst of a thunderstorm to a day of suffocation. It was at least change, and it came with a rush – a plain-spoken man’s disembodied voice that broke forth with the salutation, “Audible hopes you have enjoyed this program!” When, in fact, I had not.


View all my Goodreads reviews
Posted by Bob Varettoni at 9:25:00 PM No comments: 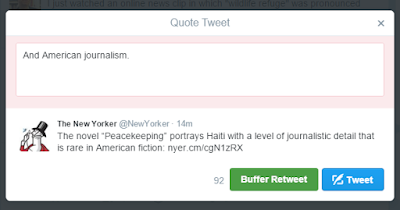 See that tweet in the graphic? I didn’t send that today.

It pokes fun at journalists, and I work with journalists for a living. In fact, I admire them a great deal IRL. (Let’s keep that a secret, though.)

Just like PR pros, journalists are usually smart, busy and underappreciated… with jobs that depend on their reputations.

So I paused, hit delete and lived to tweet another day. (I'm @bvar, by the way.)

Less than 140 characters isn’t always a great conduit for nuance – or humor. At least not in the hands of non-comedians.

This brings to mind a non-tweet from a few years ago, when my colleagues at the Verizon Foundation gave me a big, re-useable check so that I could participate in a photo op with a New Jersey non-profit where I was a board member. We had submitted, and been approved for, a $5,000 grant to support a program that helped kids in foster homes as a result of domestic violence.

The prop check was sitting in my office a few days later, when I put the finishing touches on a press release about Verizon’s buyout of Vodafone’s 45% interest in Verizon Wireless. The total cost would be $130 billion.

I thought, “This is a very big deal for these two companies… for their shareowners… for the large retirement funds and pension plans that hold stock here.” It’s the kind of money that has impact on jobs created, taxes paid, new product development, infrastructure investment, philanthropy.

My efforts were better spent finishing the press release than staging a snarky photo. It’s all well and good to be authentic and irreverent, until someone gets hurt.

The other day, I happened to be carrying a tray of cookies (having volunteered to supply “snacks” the next time I called a late-morning team meeting) while news stories were being written about what others were calling Verizon’s use of cookies in Internet advertising programs.

A tweetable photo of a plate of Verizon cookies? How authentic! How irreverent! How of-the-moment!

To sum up… if you’ve read this far and you’re looking for authentic, irreverent, of-the-moment humor, let me just say this:

Why Media Training Is More Important Than Ever 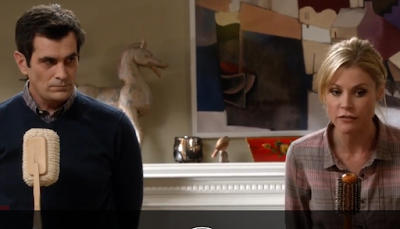 There's nothing like an election year to prove the value of media training.

From Rick Perry’s “oops” moment to Marco Rubio’s robotic sound bites, there are ever-present echoes of memorable on-camera blunders that have shaped perceptions, ruined careers and changed history:
All these are seminal moments in traditional media training courses, and the lessons are so ingrained in our culture that they have become part of our collective awareness.

A 2012 episode of “Modern Family” featured Claire Dunphy, running for town council, participating in a hilarious mock debate as she prepared to face an opponent on public access TV. Surrounded by family members who point out her every eye roll and flawed gesture, her young daughter pointedly asks a simple question, “Mrs. Dunphy, why are you running for local office?”

Claire pauses and stutters, and you don’t even have to know what happened during Roger Mudd’s 1979 interview with Ted Kennedy to know that her candidacy is doomed.

If you’re a public relations professional, you should have a thorough grounding in this history, and in the basics of media training. There are many courses and workshops on the topic.

For example, April 6-8 in New York City, Ragan Communications is sponsoring a “PR & Media Relations Summit” – and on the opening afternoon, I’ll have the pleasure of teaming with media trainer TJ Walker for a two-hour pre-conference workshop. With TJ, things promise to be hands-on, with great practical tips to prepare any client to face a camera or important interview.

Even if you feel as if you’ve been there, done that, you may want to join us anyway… because, like every election year, there are new lessons to be learned.

Politicians are always on the cutting edge of media trends. No matter what your politics, you can learn PR from them. Remember how President Obama raised millions in campaign contributions via an email with a folksy subject line that just said “Hey”?

This year, while potential voters may abhor or delight in the Republican debate about the size of Donald Trump’s body parts, I think the new lesson is that everyone can benefit from media training.

No longer is media training a tool to prepare clients or corporate executives – instead, media training is an important life skill for the rest of us.

“Remember, the mic is always on…” used to be the #1 rule in media training. But this particular election season has brought home the point that the mic and camera are everywhere – and you have to act accordingly.

Look at Chris Christie, standing to the side of the stage following his endorsement of Trump. It was Christie who inadvertently became the story.

Today, everything is magnified – a tug on Trump’s leg, the color of Bernie Sanders’ suit, whatever that was on Ted Cruz’s lip -- and nothing is outside of the camera’s field of vision.

This election year, we’re all part of the story, for better or worse.


“The Christie videos were just the latest installment in what might be the defining video format of this election. Call it marginal media, in which background activity overwhelms the intended subject… Hillary Clinton was overshadowed by the surreal stylings of ‘Sticker Kid,’ who mugged, jerked and danced throughout her stump speech.”


PR practitioners can stage the best speech and help compose the best shot, but Tanz makes the point that when everyone has video cameras in their pockets, you can’t really expect people to look where you want them to look or hear what you want them to hear.

Today, we’re all potentially in the spotlight of someone else’s story. And in the 2016 election year, marginal media may trigger a shared cultural moment that will again change history.

Think of the anti-war demonstrators outside the Democratic National Convention in 1968. While under physical attack, many began a chilling chant that resonates with a different meaning in 2016:

Here's the happy recap (Mets fans will appreciate that reference) of IABC New Jersey's recent panel on obtaining and enhancing a career in communications.

The post is from Deirdre Breakenridge's website. She's in the center of this photo by Kristin Nestor, with Sandy Charet on her right.

I posted my own preview of the panel last month, and it was a pleasure to meet so many Rutgers students on what was probably the rainiest night of the century.