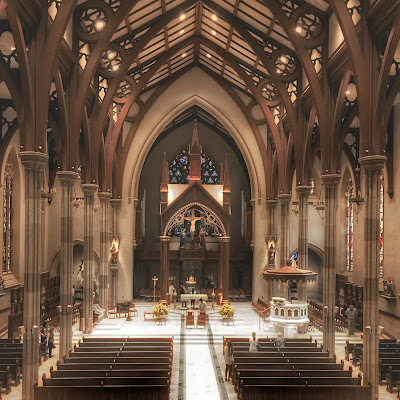 An intriguing story in The Record reported on yesterday's dedication ceremony at the Cathedral of St. John the Baptist in Paterson, NJ -- a church that has been closed for renovation for six years.

The church is 152 years old, and after portions of the ceiling began to fall, the Diocese of Paterson embarked on a $17.4 million project to restore the structure to its previous grandeur. A priest who attended the dedication said, "It's the closest place to heaven there is in New Jersey."

After a packed house for the 1 p.m. Spanish Mass filed out of the church on the first Sunday after its re-opening, I filed in and took these photos.

The place was gorgeous -- and full of life. I was hardly the only one taking cell-phone photos (although I was the only one to sneak up the metal spiral staircase to the choir loft, where I took the photo at the top of this page).

The church holds special meaning, because my uncle was ordained there. Then-engaged Mom and Dad had eagerly attended this ceremony, since they wanted Julian to officiate at their wedding. The proudest person in the church that day was Nonna, my grandmother, who turned to her husband in the parking lot and insisted, "Varry (my grandfather's nickname, an abbreviated form of Varettoni), you CAN'T sit in back of the church today. You have to sit up front with me!"

I believe he did, too -- although I have no photos to prove it. On a recent visit to Fr. Julian's house, I had combed through his old photos, and the closest I found was this: 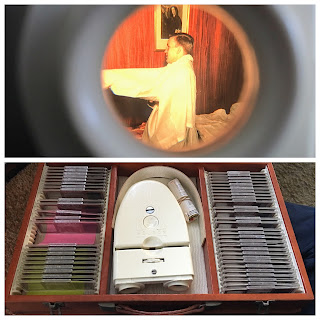 It's a vintage Holson Stereo Slide Viewer, battery operated, with slides and a storage case. I looked at a few of the slides and happened to take a photo through the viewing lens of my uncle, dressing for his ordination at the Cathedral of St. John the Baptist in 1955.

I suppose, 62 years from now, the album I posted today in Google Photos will seem just as quaint and curious as the Holson viewer... or, maybe, the things we send to the cloud today will become irretrievably buried in a sea of data. Perhaps all will be lost, because it isn't tangible.

At least our cathedrals should survive. 1. Time doesn't stand still. Sometimes its passage is marked by the side of the field house at the high school track (see above). Or, in early summer, when the sun aligns with the pink flamingos on the lawn of the municipal building... 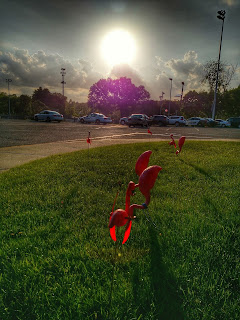 2. We're always prepared. Thanks to the Scouts. The photo above of "New Milford-henge" was actually a "Get Flocked" fundraiser held by the Boy Scouts last year. At the other end of town a little less than five years ago, the Girl Scouts installed a permanent mural dedicated to New Milford's veterans on Merschrod Bridge. And, this year... like every year... before Memorial Day, Boy Scouts placed flags on the graves of veterans at the historic French Burying Ground across the street from Borough Hall. 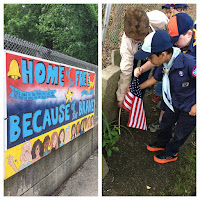 3. There's something about Mary. More common than pink flamingos -- or ADT home-protection signs -- or even the sometimes colorful lawn decorations (I call this one "potheads")... 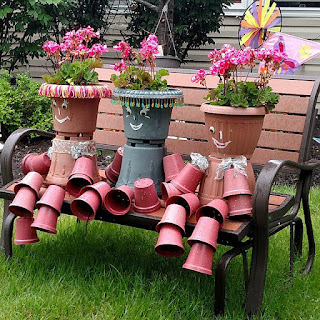 ...are the devotional Marys that adorn many lawns and gardens. Here are 15 examples: 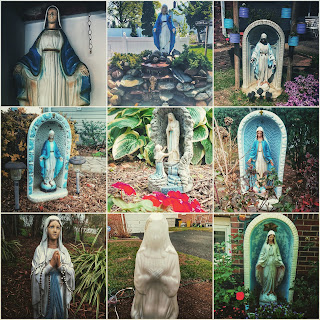 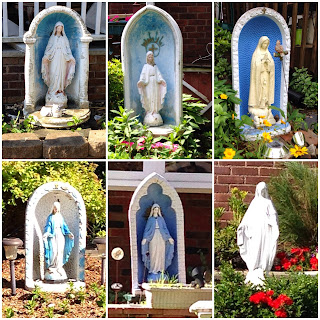 Meanwhile, near the Post Office (which is currently advertising itself for rent), at the Gloria Dei Church, there's still also worship space available for rent... 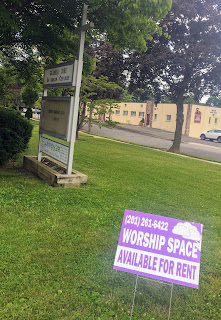 4. Speaking of signs, there's something about small business. Whether it's the Boulevard Funeral Home advertising for business during Small Business Saturday... 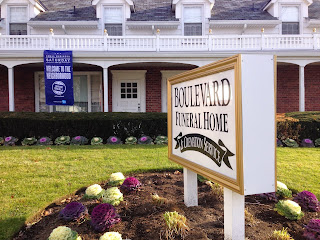 Or, a personal favorite, the extraction of a lawn tooth (before, top; after, bottom) on River Road: 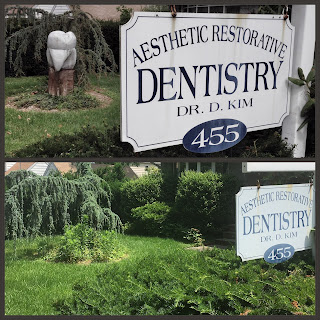 5. There's something about baseball. Little League baseball is very big here... whether it's the bleacher sign in homage to "Bad News Bears," or the magical realism of an ordinary game night. 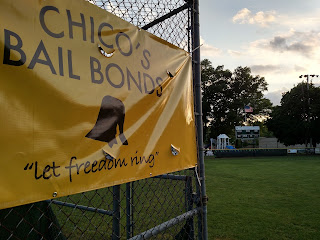 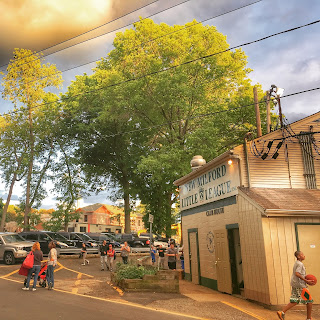 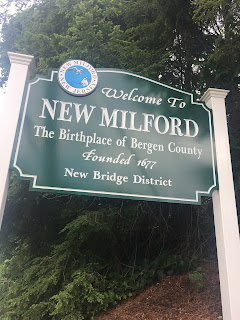 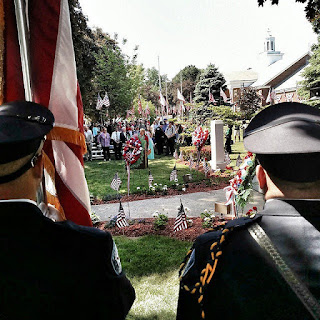 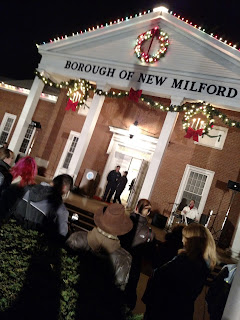 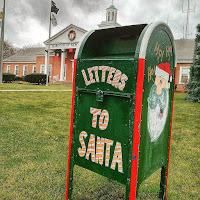 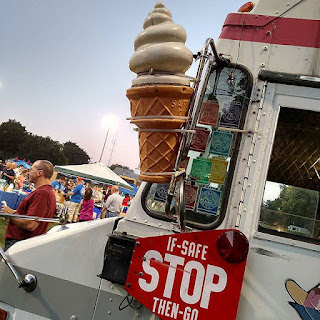 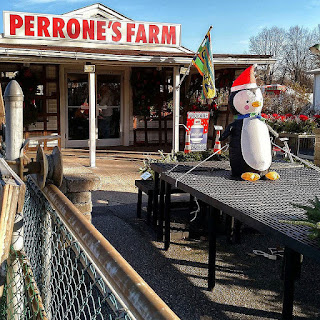 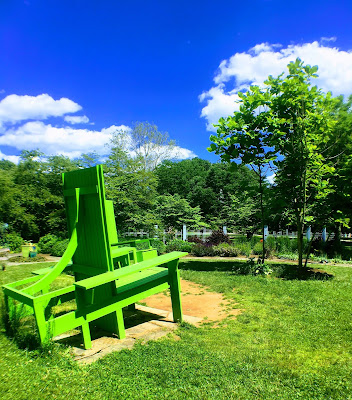 Here's a photo of the iconic giant green Adirondack chairs at Rutgers Gardens. I spent yesterday there, wandering around with photographers from NJspots and my former Verizon colleague Jerry Rizzo.

The gardens -- located at 112 Ryders Lane on the Rutgers campus in New Brunswick -- include a pond, a bamboo grove and a collection of giant pine trees. I kept looking up in wonder... which is a pretty good way to spend an afternoon. 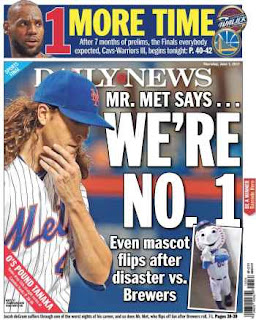 I love Mr. Met and, knowing that he can’t use his own voice to defend himself, let me offer the following media advice.

Don’t Make Excuses. It doesn’t matter what the facts are. Everyone knows that Mr. Met has only four fingers, so how is it, exactly, that he is accused of using his middle finger?

It doesn’t matter, though. If the entire Twitterverse, and the back page of the Daily News says you’ve flipped fans the bird – and there’s an incriminating photo to back it up – you’re guilty.

Apologize for Yourself. The Mets organization immediately issued an apology, and I realize that Mr. Met can't (or doesn’t) actually speak – but, to all appearances, it looks like Mr. Met is hiding behind someone else’s statement. I advise the mascot to issue a video writing out his own apology, or issue a photo holding up his own statement.

Make Amends. This is where Mr. Met has been served a softball he can hit out of the park. Community service is his strength. There are countless photos of Mr. Met helping out at recycling rallies and other events, brandishing his t-shirt cannon, posing for fans with Mrs. Met… the possibilities here are endless. Mr. Met, with that permanent smile on his face, should get back to doing just those things that made him loveable in the first place.

Yes, there should be a cooling off period where Mr. Met stays out of the public eye. Three news cycles – which equates to about 24 hours, in today’s world – should do it.

The public always wants to forgive you. There’s no better story than a fallen hero who redeems himself. I look forward to the day (later tonight or tomorrow) when Mr. Met can quietly resume doing what he does best: putting smiles on the faces of children or, I admit it, grown-ups who work in PR.

Originally posted on my LinkedIn page.