Remembering a Friend in Bushwick


Until yesterday, I had not been to the Bushwick section of Brooklyn since February 1987. Both trips were work-related; each was very different.

In 1987... I was newly working in the PR department for New York Telephone, and an electrical fire in a central office on Bushwick Avenue had just knocked out phone service to 41,000 people in one of the poorest, most neglected neighborhoods in New York City.

A town car had whisked me late at night past police barricades to a makeshift "command center" -- a cramped RV, where I was to spend the next few days at the side of Robin Flowers.

Robin was a big man with a deep, infectious laugh. Everyone who knew Robin loved him. Working at his side -- as we answered calls from reporters and he filled me in about how our PR department worked and taught me a bit about telecommunications technology -- has always been a highlight of my career.

Robin spent only a year or two more at New York Telephone. He left us to work at AT&T, where he'd eventually become a PR vice president, but not before keeping a promise to take me out and get me good and drunk one night if we ever got out of Bushwick alive.

I scared the hell out of my wife the way I stumbled home early one Saturday soon afterward, and she was subsequently a bit wary at the mere mention of Robin's name. Between that and the fact that he would soon be bound for even bigger things, and I lost touch with him a few years later.

Then one day in 2012, out of the blue, I heard the news that Robin had died, after and long and courageous battle with MS.

In 2016... I found myself unexpectedly back in Bushwick. Now working in the PR department for Verizon, the successor to New York Telephone's former parent company, I had met my colleagues at a private club in Chelsea to set off for a Friday of team-building and creative discovery. The agenda was a mystery.

A cramped party bus whisked us over the Manhattan Bridge -- and, suddenly, there I was in the same neighborhood where I first worked with Robin. 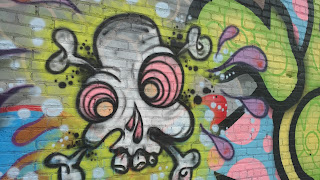 I thought of him immediately -- and yet everything else about Bushwick had changed. It wasn't dangerous. It was bathed in bright light, mixed with stray snowflakes. We were in the midst of the Bushwick Collective, an outdoor street gallery, with vibrant murals from some of the world's best street artists.

I marveled, in particular, at a hyperrealistic work by Case Maclaim from Germany. He had painted a beautiful, faceless couple embracing each other. The image screams with longing and passion; the woman holds on so tight that her finger imprints the skin around the man's bicep.

I started wandering down one street, trying to take it all in... when people started following me. Most thought I was leading the way; someone who knows me a little better shouted from behind: "Hey, Bob! This is supposed to be a team-building exercise. You're not supposed to be wandering off!"

We were scheduled to meet Joseph Ficalora, the Bushwick Collective's "curator," for a group tour of the neighborhood, but Joseph was late. With nothing else to do, everyone started taking photos of the street art.

"One by one, we're just reducing the 'cool factor' of the neighborhood," joked one of my younger colleagues, as we gazed at the sight of about 20 corporate communications managers on the hipster streets taking selfies and us-ies and photos for Instagram.

Another younger colleague was creating a Snapchat story.

"I don't like Snapchat," I said. "Nothing about it lasts."

"That's the whole point," he replied.

Finally, another colleague wandered into a local bar -- and everyone followed her, to wait for Joseph there.

Everyone but me. I wandered away again. I ducked around the corner and found a patch of white outside the frame of another work of art. It was an inadvertent brush stroke near the sidewalk.

I bent down because this is what art is all about. It's not about Snapchat; it's about durable pigments.

I bent down... and added my own mark. I dug my pen into the splash of white, and carved the initials R and F into the wall.

Remembering Robin Flowers. He made a difference, and I want people to know that. Forever.

PR 101: How to Train Your Dinosaur 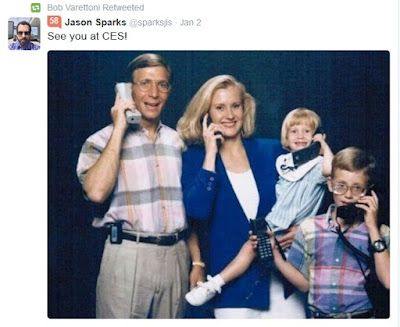 There's a bit of Walter Mitty in everyone and, over the years, I've found that an appreciation for whimsy can be a useful thing. Even in business.

I write "over the years" because a friend who retired from Verizon's PR department recently texted me this photo of something he had saved in his files since 1998: 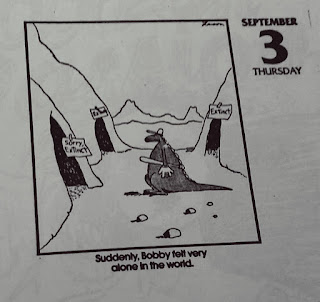 It's pretty funny too -- except for the part where the dinosaur is actually named Bob. In PR, the visuals can kill you.

So I was contemplating the deeper meaning of a decades-old Gary Larson cartoon when I ran into a work colleague early this morning.

CES, the Consumer Electronics Show, is held each January in Las Vegas. This year, it attracted 170,000 people, including the usual mix of marketing and PR professionals.

In truth, because my job is focused on financial PR, there's little reason for me to attend. And in fact, don't tell anyone... after all, what's written in Jersey, stays in Jersey... I've never been to Las Vegas in my life.

"But didn't I see you there last year?" my colleague replied, confused.

A routine response would have been, "No, not me. You must be thinking of someone else." Then sulk about who he could have mistaken me for.

But, over the years, I've learned that not taking yourself too seriously can keep your inner dinosaur at bay. I simply looked bemused.

"Not allowed in Vegas?" he repeated. "I swear I saw you there last year."

Bob Varettoni, inscrutable to the last.