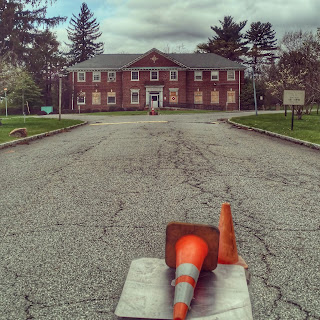 This is the North Jersey Development Center, a 188-acre compound of buildings, forever shrouded in mystery and permanently closed in 2014.

The property overlooks and abuts Echo Glen, a suburban development in Totowa where my parents bought their first and only house. A high fence, which was topped with barbed wire when I was a boy, separates the center from this neighborhood, which was built on top of swampland so that none of the cookie-cutter houses have basements.

According to asylumprojects.org, the Development Center opened in 1928, preceding Echo Glen's construction by 30 years. Originally known as the North Jersey Training School, the center served "625 mildly retarded females" in 1953 and included a 275-bed nursery, making it the only one in the state that housed children. The source here is a 1969 study published by the "New Jersey Association for Retarded Children." 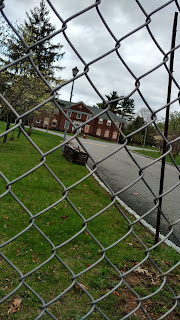 One anonymous post on Google Books claims that many locals in the 1950s considered the center to be a school for promiscuous, wayward girls or an experimental asylum where a variety of psychology trials were staged.

By the 2010s, the facility housed nearly 400 adults, dwindling to 190 residents before being shuttered. Some residents were moved to the Hunterdon Developmental Center, which offers care for a wide variety of neuro-developmental disorders, including Down syndrome.

When I was a boy, Totowa's Training School housed men, women and children in several dozen dormitory-style cottages. There were 35 buildings in all, including a school, chapel, healthcare facility, auditorium and swimming pool.

I know this first-hand because I once attended a packed performance by Bozo the Clown at the auditorium there. Also, as an altar boy, I spent one summer assisting Fr. Lynch from nearby St. James parish as he celebrated Mass at the chapel.

Fr. Lynch was a tall man who rested his elbows on the pulpit and crossed one leg casually behind the other as he delivered his folksy sermons. He thought it might do me good to accompany him to the Training School every Sunday. 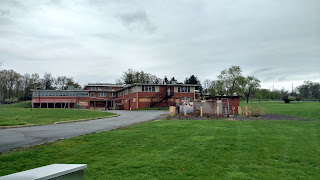 After folding himself into his compact car, Fr. Lynch would drive us down Minnesink Road and into the compound, past neat rows of cottages. Upon our arrival, the chapel was always packed with a well-dressed crowd of young residents and their families.

I was always intrigued by the congregation's responses during Mass. Prayers were loudly half-sung by the residents, who enthusiastically emphasized all the "thees" and "thous" in the Our Father and Hail Mary. At that point in Catholic Church history -- in the years following Vatican II -- there had been a concerted effort to encourage people to recite all prayers using "you" and "your."

"Why does everyone here pray the old way?" I asked Fr. Lynch.

"They pray the way they were taught," he replied. "It's comfortable and reassuring."

Today, decades later, at St. James itself, everyone prays the old-fashioned way, anyway.

I don't remember much about Fr. Lynch beyond that summer. He left St. James soon afterward, and the priesthood too. He married, according to one rumor. He died in Vietnam, according to another. In the pre-Internet era, there was no way of knowing for sure. 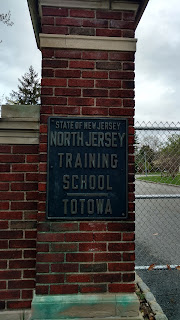 In the 1980s, the state changed the Training School's name to the more-PC "Development Center," but the name outside the main entrance has always stayed the same.

Visiting my Mom the other day, I noticed that even the front entrance of the place is now enclosed behind a chain-link fence.

I stopped to take these photos -- and, in doing so, a couple of things occurred to me.

For one, everything in Totowa looks smaller than in my memory. It always does.

For another, I can't remember a single word of any one of Fr. Lynch's sermons, but I still, to this day, recall his kindness to everyone I saw him interact with that summer.

And finally, standing outside the locked gates, I heard no ghostly cheers for Bozo the Clown nor any echoing petition that Thy kingdom come or Thy will be done.

Instead, in 2016, the only sounds haunting this place can be traced to the traffic in the near distance, as everyone else speeds past on Route 80.