Why I Hate Yelp and Love My Wife

(With apologies to James Thurber -- and his short story, "What Do You Mean It Was Brillig?) 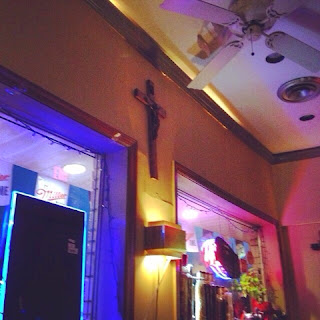 I was sitting with my iPad on the couch this morning, staring at the screen, when Nancy walked by.

"It looks like the elks are going to pay for the maps!" she said cheerfully.

It did not surprise me that they were. Living with Nancy, it would not surprise me if the elks not only paid for the maps, but also bought drinks for the caribou. No doubt hilarity would ensue.

Life with Nancy is always brillig; she can outgrade a mome rath on any wabe in the world. Only Lewis Carroll would understand my wife completely. I try hard enough.

I tried Googling this phrase and found myself at the Colorado Parks & Wildlife site. I could have continued, as I often do on lazy Saturdays, wandering the Internet. But I had no interest in obtaining a license to hunt elk.

So I simply asked Nancy to explain further -- and discovered the prosaic truth that she was referring to elks with a capital E and certain maps of interest to our local Historic Preservation Commission.

A typical Saturday: My mind sometimes works so fast that my body can't keep up with it.

Anyway, this evening, I wanted to go someplace different for dinner, so I suggested that we finally try Luigi's -- an iconic-looking small restaurant on a Ridgefield Park side street that we have driven past for years.

It was wonderful... in the sense that the food was terrific and the atmosphere was unique. For example, there was a large crucifix hanging in the dining room.

The waitress/bartender was friendly and charming, with a uniquely warm and melodic voice. The rest of clientele, gathered around the bar at the other side of the room, was engaged in a high-spirited, intelligent and witty conversation about first love, complete with obligatory references to "How I Met Your Mother."

I thought the place was so great -- and, truly, it was the best cheese tortellini I had ever eaten, and they had ice cold Peroni on tap, for God's sake -- that I immediately Googled it when we returned home.

Despite being a family-owned restaurant in business since 1948, Luigi's received mixed reviews.

I was, in fact, horrified by the litany of mean-spirited, semi-anonymous reviews -- not only for Luigi's but seemingly for all local restaurants. One woman, from stay-classy-Bergenfield, NJ, was upset that Luigi's didn't accept a "double take" coupon and yet managed to have dinner for three for $27.70. An unedited excerpt from her Yelp review speaks for itself:


"It was taking a little long for anyone to come take our order but then a lady shows up. Hispanic girl, fairly young, nice looking and somewhat friendly. She brings our drinks and takes our order. While putting our drinks on the table, She sort of bent down and I noticed that her blouse dipped down too low and she gave my husband a major peep show, LOL. It didn't even look like she had a bra from my angle. I pointed it out to my husband and we both laughed about the classiness of this chick. An anka tatoo front and center of her chest was visible and then no bra or so we thought."


Nancy, meanwhile, loved the waitress, and the experience, and the food. We had a great time tonight.

No, Luigi's is not Olive Garden.

And this is why I love Nancy.

Not That I Have Anything Against Cats...

Let Us Now Praise Harper Lee: A Review of "The Mockingbird Next Door"

The Mockingbird Next Door: Life with Harper Lee by Marja Mills

After reading “The Mockingbird Next Door,” I admire Harper Lee even more -- and I didn’t think that was possible.

I can’t fathom why the celebrated author, now 88, says she never authorized the book. There’s too much detail here to disavow (the whole scene of watching “Capote” in her living room, for example). These details describe a smart, witty, engaging, opinionated and proudly unconventional woman who was born and raised at the right time, in the right place, and who had just the right artistic temperament, to produce what might be America’s greatest novel.

I love the Harper Lee portrayed in this book... the aging, lively and complex author who never wrote a second novel. And what difference does that make? If the Devil himself offered 10 million writers the chance to tell only one story of the caliber of “To Kill a Mockingbird,” he’d be able to purchase 10 million souls in a heartbeat.

I feel, in fact, embarrassed that Lee had to put up with the rest of us clowns in this new millennium. I cringed reading Marja Mills' description of watching the 2004 Super Bowl with the Lee sisters. Were those really erectile dysfunction commercials? Did they really just see Janet Jackson’s breast? There are the many cups of coffee Mills shared with Lee at McDonald’s, watching her neatly fold and refold spent packets of Splenda... going to senior exercise classes in Monroeville... waiting with Lee for a table at Bonefish Grill while surrounded by oblivious business-suited young professionals on cell phones.

Why did we drag down such a transcendent talent in her later years by surrounding her with such petty ordinariness?

I also read with interest about how much time Lee anonymously spent in New York, taking public transit and rooting for the New York Mets. I think now of all the times I may have passed her on the streets or ignored her on the 7 train when I worked in New York in the early 2000s. With respect to E.B. White, this gift of privacy bestowed for many years on Harper Lee is exemplary of New York City's true magic.

My quibble with this respectfully written book is that the author injects too much of herself in the telling. For all the time Mills reminds us what great storytellers Lee and her sister Alice were, we don’t actually get to read all those stories.

Apparently, many stories were kept off the record on purpose -- and, to me, this lends credence to the belief that Lee cooperated with its publication.

No matter. When it comes to Harper Lee and in spite of how much I enjoyed this book, I’m OK with keeping her life surrounded in a little mystery. I think we all owe her at least that much.


View all my reviews