Look skyward every so often when you're walking down a city street. You'd be surprised how many times you see a religious symbol.

I don't mean an arresting cloud formation or other celestial wonder; I mean something man-made.

Yesterday, during a meetup with a photography group in Jersey City, I kept curiously wandering from the pack -- and I kept getting lost.

Looking around, trying to get my bearings, I noticed religious symbols everywhere.

I saw churches, statues or crosses somewhere on just about every block. Even the street art contained religious imagery or sentiment.

One particularly large and beautiful church -- St. Mary's on Second Street -- had its doors unlocked on a Saturday afternoon. I wandered inside to get sanctuary from the cold and saw only a solitary woman there, kneeling in prayer.

Most churches I passed were locked. Some, behind fences, were in disrepair or undergoing renovation.

Still, looking skyward, they all displayed crosses that perpetually loomed, usually unnoticed, over all the commerce and street life below.

I felt neither protected nor judged by this.

Instead, I just wanted to see what was up ahead.

So I took these photos of a few of the signs and symbols and messages.

I think these are ultimately images of a shared faith -- which, even if in the Christian tradition, is something universal and non-denominational -- that there's something more to life than this.

There's a reason to be hopeful; it's possible there's a better place around the next corner.


PS - I returned to Jersey City in March and posted this related update.

The Lost Photos of Tom Lynch

Who inspired your love of photography?

For me, the answer is simple: Tom Lynch.

The hard part is, I can't show you an authenticated example of his work.

While over 40 billion photos and videos have now been shared on Instagram, not one of them has been a photo by Tom Lynch.

I'm referring to THE Tom Lynch -- the news photographer for the Passaic Herald-News and The Beacon who died in 2001.

For decades in New Jersey, the photo credit "by Tom Lynch" was a signature mark of a work of art.

Early in my career when I was a reporter for The Beacon, the newspaper for the Diocese of Paterson, I worked with Tom.

The photo of him here is a screen grab from the 50th anniversary of that publication, posted online in 2017. (No back issues are posted before May 2014, so the trail to find his photos online went cold there.)

Beginning in 1967, Tom was freelancing for The Beacon as "Christopher Shawn," because he didn't want his employers at the Herald-News to know about his second job. The thing was, his photos were so good, and so distinctive, they were instantly recognizable as Tom's. 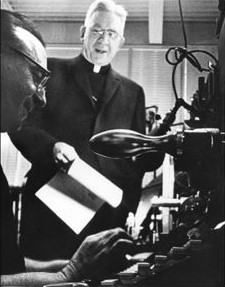 You could spread out a dozen random black-and-white news and feature photos from the 60s, 70s and 80s -- and I guarantee that I, like the editors at the Herald-News, could pick out the one Tom Lynch photo in the bunch, based on the unique point of view and clarity of perspective.

For example, I'd be willing to bet this uncredited screen cap from The Beacon's anniversary post -- Bishop Lawrence Casey looming over linotypist Brother Michael Hlinka with a galley of the paper's first edition in hand -- is from a Christopher Shawn photo.

Since his "Christopher Shawn" ruse was in vain, Tom soon joined The Beacon under his own name (and started a second job repairing clocks). I worked with him in the early 1980s (when my own second job was writing obituaries for the Paterson News anonymously in the evenings, so my Beacon employers wouldn't know).

When we worked on Beacon assignments together, Tom would talk about his craft, and afterward I'd visit his darkroom to see the chemical development process.

It was art and magic at the same time. It engendered in me a love of photography.

Fast-forward to today, when cellphone cameras and software have enabled me to at least approximate the same experience, without the same struggles.

There's an effortless magic to Instagram, and I love to post on that platform. Included here are images I posted yesterday at a stable in rural New Jersey and during a side-trip to Bethlehem, PA.

I love that people create things and put them out in the world for others to appreciate and connect with.

I don't know what Tom would think of Instagram, though. I wish he was still with us, so I could show him.

Instead, I've decided to assign myself a second job in 2019: find and post photos by Tom Lynch.

There are already billions of images out in the world, like the innumerable lights in the night sky.

So many of these images are so beautiful, but only a few evoke an aesthetic that resonates with all of us.

To me, Tom Lynch is THE North Star. 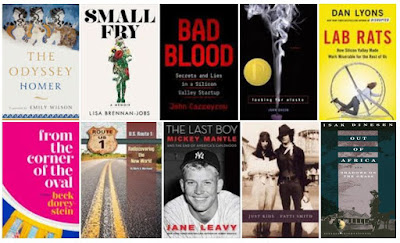 Earlier this week, I updated 10 entries to my page of book reviews.

Because I freaking love audiobooks.

Also earlier this week, my wife shared a link to a fascinating Washington Post story about the symbiotic relationship between authors and audiobook narrators.

Features writer Karen Heller hit the nail on its head (insert cliche sound effect here) with some of her observations:

"Audiobooks were once clunky and overwhelming, a failed tech experiment, encumbered by multiple discs or cassettes... Smartphones changed everything. Once audiobooks slipped into a listener's pocket, they became ubiquitous, allowing fans to 'read' while cooking, hiking, gardening, cleaning."

Or commuting along Route 287.

Heller's story notes that audiobook sales growth has been "seismic," with the Association of American Publishers reporting a 37% increase in audio sales during the first 11 months of 2018.

That's because there's something primal and comforting in having someone read you a story. Audiobooks let your imagination roam while adding a second, immersive sense to the reading experience.

It's sometimes better than movies -- which I also love with a passion -- because sometimes your inner vision is more meaningful than an actor's or a director's. Also, the sweep of a book's detail and narrative isn't edited by a third party.

Having recently watched the 1974 movie version of my favorite book, "The Great Gatsby," it astounded me how extraordinarily thoughtful and detailed the production was. Yet this noble cinematic effort has received more than its share of mediocre reviews over the years. Because "Gatsby" isn't a character you can present to someone fully whole; Gatsby is personal.

The added dimension of audiobooks, plus technology, has added to my "reading" experience in many odd ways:

So feed your soul with some epic listening. And don't even get me started on the great new serial podcasts available from audible.com or independently (here's a scary one my daughter and I attended a great live performance of: thenosleeppodcast.com).

...features the "book jacket" to "The Poems of T. S. Eliot read by freaking Jeremy Irons."

OK, I added the "freaking." The Post's review really says, "Irons' narration for this collection of poems, beginning with 'The Waste Land,' is forlorn, desperate, crabby and weary -- mirroring Eliot's understanding of a desiccated, exhausted culture bereft of meaning."

For God's sake, does the intersection of art and life get any better than that?

For extra credit, check out Irons reading "Lolita." -- and, for fans of the Garden State who prefer their books in print: "The 18 Books Every New Jersey Resident Should Read Before They Die." 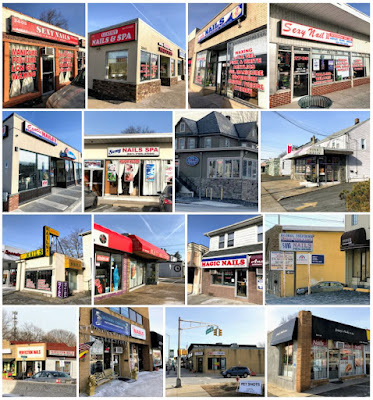 Easy: along Broadway in Fair Lawn.

There are 16 nail salons in the 1.4 miles between Jenny's Nails at 34-14 Broadway in Fair Lawn and Magic Nails at 99 Broadway, just across the border in Elmwood Park.

I counted and photographed all of them Saturday morning. Because I must be insane.

That's 16 nail salons in the space of a drive that lasts (at the 35 mph speed limit) about 2 minutes and 15 seconds, or an average of one nail salon about every 460 feet.

The Fair Lawn Broadway area, which has its own website, is a 2-mile commercial thoroughfare (also known as NJ Route 4), which runs in an east/west direction through Fair Lawn to the east and Elmwood Park to the west.

It's home to some of the most well-manicured people in America.

And it's just another quirky reason I love New Jersey.