A New Generation Runs to a Crisis

Driving north on the New Jersey Turnpike this morning – on the eve of the 16th anniversary of the 9/11 terrorist attacks -- I saw a convoy of Con Edison trucks heading south, toward Florida, to help restore electricity in the wake of Hurricane Irma.

The crews were speeding in the opposite direction of safety, because they knew they had a job to do.

I’m proud to see the same ethic on display at my own job.

I work in PR at Verizon, and I know colleagues who are, right now, staffing Florida command centers 24x7 in hardened facilities state-wide, built to withstand Category 5 winds. They are already assessing damage and coordinating with emergency management teams to provide support as soon as it is safe and possible. Just as other colleagues did in Texas last week… and just as still others did nearly 16 years ago today.

I recently had the chance to review and comment on a publisher’s proof of a history of Verizon. Although I was with the company on 9/11/01, I was lost in the details of my own experience while safely in Midtown Manhattan, and so I was astounded and moved to read the detailed story of the extraordinary bravery and commitment to service by workers at Ground Zero who miraculously reopened the New York Stock Exchange just days later.

I’ve been archiving materials I’ve come across about these efforts. I’ve posted them on this Pinterest page. The most amazing artifact is a 38-minute video of the key participants who led efforts to restore service, in their own words.

Part of Verizon’s employee Credo is that “we run to a crisis, not away” – and since 9/11/01, many thousands of employees have been on site to repair and restore damaged networks, and still more have responded with monetary aid and donations to about three dozen emergency situations through the company’s Disaster Relief Incentive Program. This includes Hurricane Sandy, Hurricane Katrina, the Haiti earthquake, tornadoes in Missouri and Alabama, and – just this past week – Hurricane Harvey, the Mexico earthquake and now Hurricane Irma. 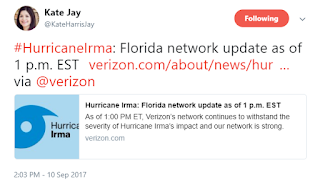 This afternoon, as I was writing this, I retweeted a network status update from Verizon’s Florida PR contact, Kate Jay. When I did, I happened to see the tweet below by John Legere, the CEO of T-Mobile, promoting his “Slow Cook Sunday” Facebook Live feature, just a few hours after Irma made landfall on the Florida coast. 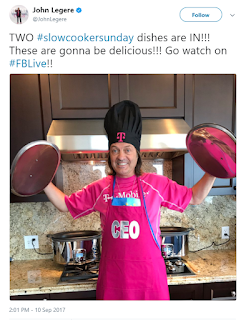 Legere has amassed more than 4 million Twitter followers and often insults competitors. One recent Sunday morning, he retweeted a story about the first-ever telescopic picture of a black hole. “Wait…” he commented, “Is this a photo of Verizon’s soul??”

But this Sunday, I’m not in the mood to laugh.

Yes, Verizon does have a soul. The evidence was on display in 2001, just as it has been this Sunday.