Military Appreciation Month: The Story Behind the Stars

Drive around my hometown -- New Milford, NJ -- and you'll notice street signs that display a gold star next to the same names that are inscribed on our Veterans’ monument in front of Borough Hall.

What are the stories behind those stars?

May is Military Appreciation Month, and the New Milford Historic Preservation Commission recently produced a presentation that provides the extraordinary details of some of these stories.

You can scroll through the entire 40-slide presentation -- produced by my wife, commission chair Nancy Varettoni -- here:

What especially intrigued me were the photos and profiles beginning with Slide 14: pilot Louis J. Faller, just 24 years old and New Milford's first resident to die in World War II.

Much of this source material is thanks to Teresa M. Martin, a long-time educator in New Milford's middle school, who in 1947 published a booklet about the 563 men and women in the borough who joined the Armed Forces (and the 223 citizens who volunteered as members of the local Defense Council) during World War II.

In the slides that follow, we learn that Henri Neil Reichelt, also 24, died during the sinking of the USS Juneau, after fierce fighting near Guadalcanal in the Solomon Islands. Nancy researched this battle to learn (from a Washington Post story) that five brothers had died when the ship was torpedoed by a lurking Japanese submarine I-26. The fatal torpedo had missed the nearby USS San Francisco and struck the Juneau near the compartment where munitions were stored. The ship exploded instantaneously, broke in two and both parts sunk within 20 seconds.

We also learn about the life of Frank J. Rosse before he was killed in action in January 1945. The second lieutenant had come from a family of musicians. Before being drafted into the Army, he played guitar in a trio with his two sisters. After his death and joined by a third sister to perform as The Fontane Sisters, his siblings sang with Perry Como on several hits, including "A, You're Adorable."

We learn, later, that Richard T. Shea Jr. married Joyce Riemann of New Milford before dying in the Battle of Pork Chop Hill in July 1953. He posthumously was one of 145 Korean War veterans to receive the Congressional Medal of Honor for gallantry and courage. His son, Richard III, was born two days after his death. 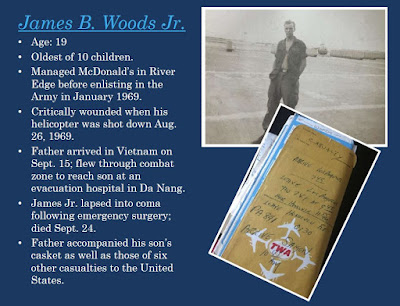 The last profile is that of James B. Woods Jr., just 19 years old when he died after injuries suffered when his helicopter was shot down over Vietnam in August 1969. Young Mr. Woods was the manager of the McDonald's in the neighboring town of River Edge, NJ, before enlisting in the Army. His father flew through a combat zone in Vietnam to be at the side of his comatose son when he died at an evacuation hospital in Da Nang.

The elder Mr. Woods returned home to New Milford on a plane with his son's casket -- and the caskets of six other sons, from six other towns, who had all died in the fighting in Vietnam.

May is Military Appreciation Month, and the stories behind the stars deserve to be heard and honored.

Thank you for posting this story. I'm proud to know that New Milford honors our fallen heroes. All of these young men died to soon.