A Visit to Citi Field, 38 Days Before Pitchers and Catchers 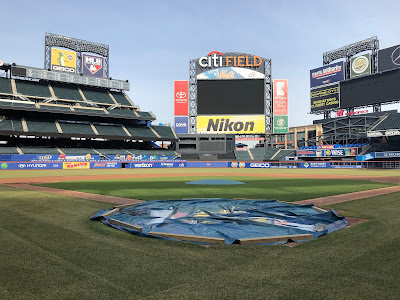 With the Christmas season ending tomorrow, what’s left to provide hope and joy during this winter of discontent?

It can’t be merely “rooting against the Patriots, Cowboys, and both Clemson and Alabama” – although these are noble pastimes given the apocalyptic end to Notre Dame football and the lingering death of the New York Giants.

Surely, there’s more to life than this.

Well, first, don’t call me Shirley. And, second, how’s this for an epiphany:

That’s why the other day I took my Valentine to tour an otherwise empty Citi Field in Queens, New York.

These tours are wonderful.

They begin and end at the main entrance of Citi Field, in the Jackie Robinson Rotunda, a 19,000 square-foot open-air space with 70-foot archways constructed of thousands of the stadium’s 1.2 million bricks.

Why Jackie Robinson? Our tour guide -- Cort, perhaps the nicest guy in the world and who knew the number of bricks -- explained that Robinson broke baseball’s color barrier in New York, and that the Mets’ ownership had an affinity for Ebbets Field, which served as the model for Citi Field’s exterior.

Also, Jackie Robinson is Jackie Robinson. His story transcends any one team, which is why every ballplayer wears a No. 42 jersey every April 15, the day he made his major league debut.

Cort also imparted other bits of Citi Field trivia. Such as: This is the only stadium in the majors where the foul poles are painted orange (since orange and blue are the Mets’ team colors).

As the tour continued, we wandered through surreally empty hallways, event spaces and game-day suites. Here’s a collage… 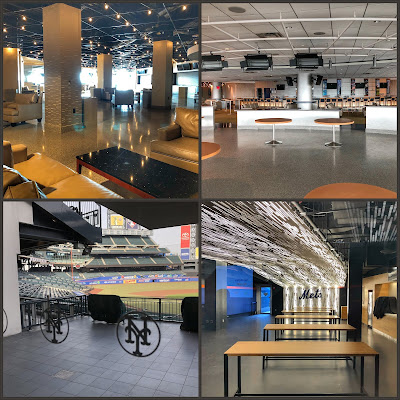 Cort said he had recently attended a wedding reception in the largest event space, the Foxwoods Club. He noted that my favorite mascot, Mr. Met, attended and danced for hours – including on top of one of the tables. Baseball’s Twitter King, Noah Syndergaard, would not have approved.

Foxwoods also provides panoramic views of Flushing Meadows-Corona Park: the U.S. Open tennis grounds and what’s left of the 1964 World’s Fair. To the west, you can see the New York City skyline in the distance and, adjacent to the stadium in Parking Lot B, the ghost of home plate and the base paths of the Mets’ ballpark from 1964 to 2008, Shea Stadium.


The best views on the tour were three-fold. First, from the press box: 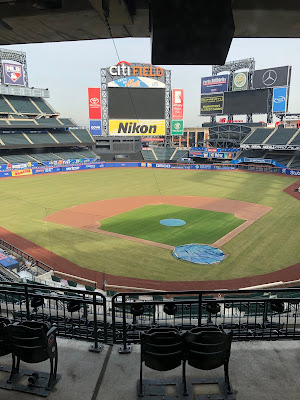 Second, from ground level... in the dugout, on the field and in the bull pen: 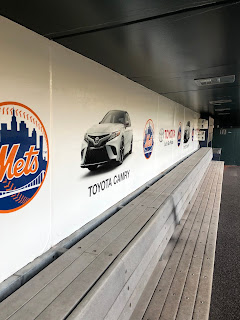 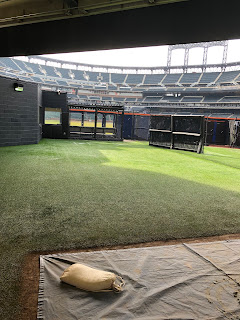 A final best-view was from inside the Mets clubhouse and locker room. No cameras were allowed in these parts. But fortunately we were allowed to take photos in the nearby Media Room, where post-game press conferences are held and trade announcements are made.

Here’s me at the mic, and Nancy and I announcing that we’ve re-upped our marriage contract. 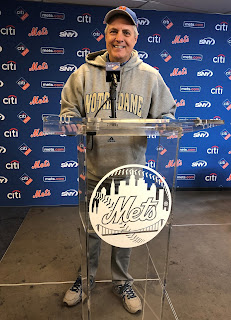 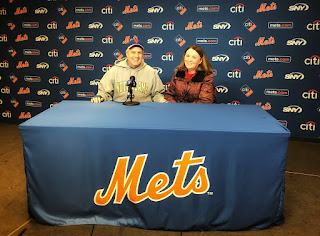 After the tour, we returned to New Jersey to have lunch at a Mexican restaurant. As we sat down, Lynyrd Skynyrd’s “Simple Man” began playing in the background.

How appropriate, Nancy remarked, since this is the walk-up song for our favorite Mets’ player, Jacob deGrom.

Thank you, baseball, for this bit of summer magic on a cold, windy day in January.

PS - I forgot to ask Cort two things: Why is there a sign next to the press box phone saying, “All calls are recorded and monitored by the Office of the Commissioner of Baseball”? Also, why is there a stash of sulfuric acid behind the door next to the Ticket Office? 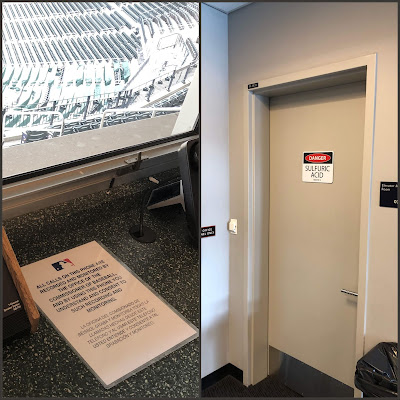 I'll have to take the tour again to get the answers.