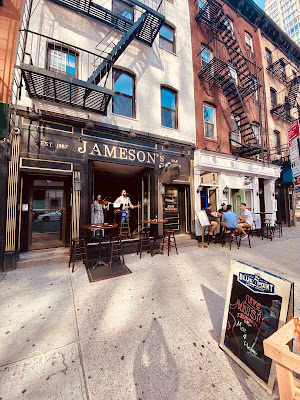 It was the first time my wife and I were back together in New York City since the outbreak of the pandemic. We walked around our old haunts on the East Side, without any direction.

Nancy turned to me at one point and said, “It’s odd. I’ve never seen New York look like this.”

“The city looks vulnerable,” she said. “I never thought that would be possible.”

As we approached 52nd Street, I had an idea. “Let’s have a drink at Murphy’s,” I said, eyeing a temporary terrace, constructed of 2x4s, jutting out into the empty red bus lane along the west side of Second Avenue. A temporary sign proclaimed that the site was “Murphy's Pub,” although the permanent signage on the building called it “Jameson’s.”

When we were dating, Nancy and I often had drinks at Murphy’s – usually with colleagues from the newspaper where we worked nearby. We were regulars. When my wife entered, the bartender would cheerfully call out, “Gin and tonic!” – as if she were Norm on the sitcom “Cheers.” 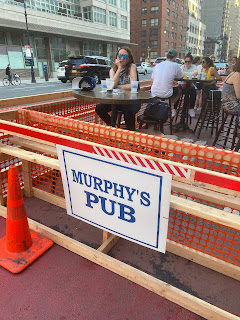 We took seats at the outside bar, and a waiter dutifully handed us menus, since we’d need to order food (in accordance with Gov. Cuomo’s restaurant-opening restrictions). We did – and Nancy, who for years has ordered only wine on date nights, ordered a gin and tonic with her meal.

Surprisingly, from a makeshift stage at the front door, music began to play. It was “Mae & Henry” – a guitar and violin duo of locals Mae Roney and Henry Raber.

Mae is a wonderful fiddle player with a soulful vocal range, and her version of the great 1990s song by 4 Non Blondes, “What’s Up (What’s Going On),” gave me goosebumps. Live music is vibrant and immediate, raw and energizing in a way that can’t be replicated in the streaming videos of homebound musicians.

The waiter retuned with two large, clear plastic cups, one filled with a perfectly-headed Guinness for me and another, with ice, containing a strong, cool, smooth gin and tonic.

It was as if a ghostly bartender had been waiting for 30 years just to serve a perfect drink, in a perfect moment, to Nancy.

The gin and tonic looked refreshing and timelessly regal. Drops of condensation made the cup glisten in the descending sunlight. 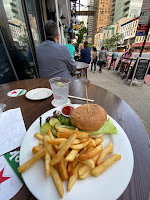 In the month since, I’ve returned to New York other days in my current job. Last night I detoured past Murphy’s Pub on my walk from a parking garage… and found out that it was vulnerable too.

A post on its Instagram account (adorned with the logo of its co-owned sister/neighbor, Jameson’s) said, “our attempts to negotiate reopening that would allow us to operate and recover from the pandemic proved unfruitful… Go raibh maith agat!”

I tried Murphy’s door, but it was locked. An amiable young man with close-cropped curly red hair poked his head from an open window. “Couldn’t get another lease,” he explained with a brogue.

I looked past him and saw chairs stacked on top of the pub’s familiar wooden tables, and some half-packed boxes. “We’ll be open around 5 today, if you want to stop by then. But we’re closing this weekend. On to better things.” He shrugged and smiled.

So after work last night I had a last burger and drink at Murphy’s. No music played, but I imagined Mae & Henry performing an old Dylan tune, and I toasted all of us who once shared some time together here.

Here’s to you, Nancy, and Joe and Cathy, Mary and Dennis, Mia and Bill... to Tricia, Ken, Rich, Monica, Laurel, Claudia, Sue, Mia, Gina, Marguerite... to Randy and Barbara.

We were once together in a magical place. It wasn’t just this bar near the corner of Second Avenue and 52nd Street. It was all of it.

On to better things.

Wherever any of us are now, in New York we are forever young. 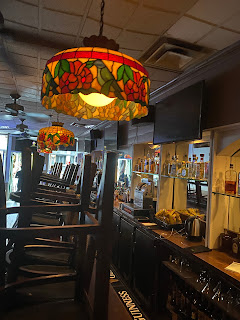 Danny at Murphy's sent this note this morning: "Just to keep you in the loop, Jamesons and Murphy’s have stood beside each other for many many years and the last owner had them both. He had owned Murphy’s for 34 years and bought Jameson’s about 6 years ago. Jameson’s sadly closed its doors a few weeks back for good and unfortunately we just got word that on Saturday coming, Murphy’s will pour its last beer also. I’ve worked with the company for only a few short years but enjoyed meeting all the old regulars that stopped in to revisit their past. Always great stories. Thanks again for the post. It was perfect. All the best."