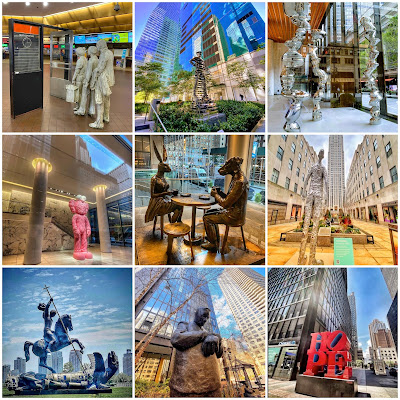 In this summer of a zombie virus that doesn't die, the streets of mid-Manhattan can offer a bit of inspiration and beauty and hope.

I commute into New York City a few days a week, and here are some images of the unique sculpture garden I've found in walking to the office and at lunch.

Beginning at the Port Authority Bus Terminal, where "The Commuters" by George Segal depicts three people waiting for the same bus since 1980, and it's perpetually 3 o'clock... 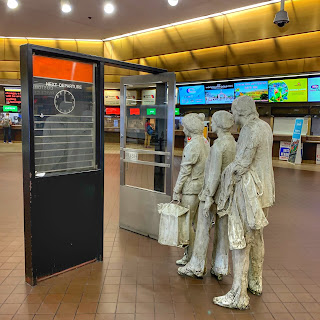 Outside the terminal, an 8-foot-tall bronze statue of Jackie Gleason, clad in his Honeymooners bus driver's uniform, looks out over Eighth Avenue, in a statue by Larry Nowlan, "Presented by the People of TV Land."

Heading east, past The New York Times building, I'm reminded of Dad. He spent many years working in the building behind the statue here. The aptly-for-Dad named "Guardian Superhero" is one of a pair of 13-foot statues by Antonio Pio Saracino at the entrances on either side of the plaza behind 3 Bryant Park. 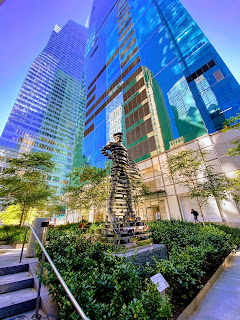 Wandering north to Seventh and 53rd, there's a sign of hope, literally, courtesy of Robert Indiana. We're not in Philadelphia anymore... 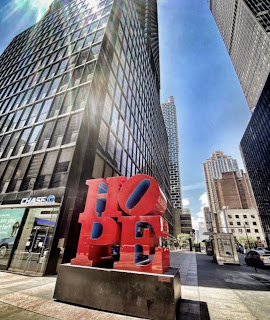 And then back down to Rockefeller Center, where Tom Friedman encourages everyone to "Look Up." 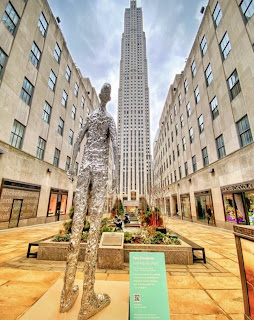 Head south to Grand Central Terminal (one of my favorite places in the city) to see the new kid in town: the towering One Vanderbilt skyscraper. Its soaring lobby, still locked and opposite the terminal, houses this twisting, reflective, untitled 2020 sculpture by Tony Cragg. 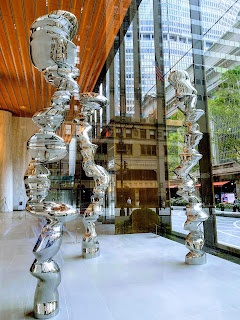 Nearby, along Park Avenue, I'm happy to see dog and rabbit still having coffee together at “The Table of Love,” a private commission at 237 Park by Gillie and Marc Schattner, perhaps the city's most prolific creators of public art. Two empty seats invite others to join them. 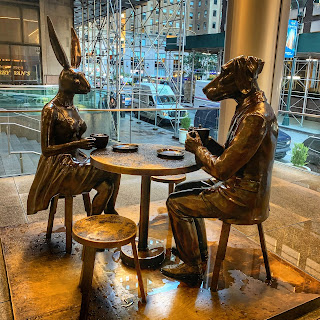 Further up along the avenue are two whimsical giants by Kaws, the artist Brian Donnelly. The pink one (my favorite) is called "BFF" (at 280 Park), and just a few blocks north "WHAT PARTY" stalks the entrance to the Seagram Building. 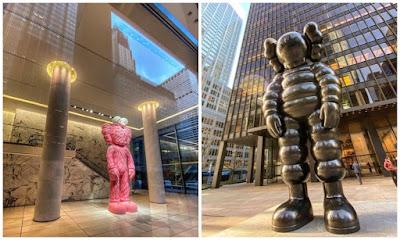 I do eventually arrive at work. Here's "Contrappunto," an older sculpture (1963) by Beverly Pepper, outside my office building at 777 Third Ave. 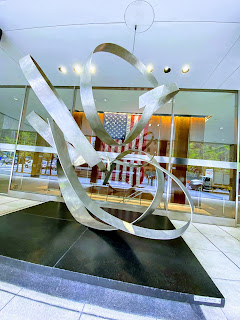 But then, at lunchtime, I'm back on the streets heading further east, toward the United Nations sculpture garden. It's still locked, but you can stick your cell phone between the bars of the gates to get a clear view of "Good Defeats Evil" by Zurab Tsereteli, with a dragon depicting a nuclear warhead. 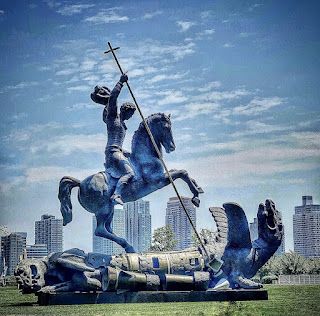 Then I wander back, past Dag Hammarskjold Plaza, where three works by Jim Rennert are on temporary display until late August: "Timing," "Inner Dialog" and "Commute."

No sculpture garden is complete without a water feature... like the waterfall tucked between buildings on East 51st Street, between Second and Third, a beautiful place called Green Acre Park. 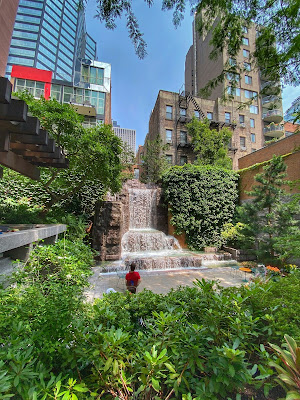 Here are related posts about sculpture gardens in New Jersey: Grounds for Sculpture and a vest-pocket park in Teaneck.
Posted by Bob Varettoni at 2:13:00 PM