A Valentine for New York City 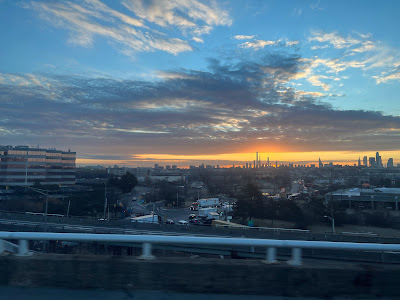 I captured the image above while sitting in the back seat of a New Jersey Transit bus, stuck in traffic on the NJ Turnpike, during the morning commute to work last week.
I didn't mind the delay. It gave me time to enjoy the sun rise over the New York City skyline.
I returned to the office in February, after an Omicron-imposed work-from-home hiatus, and I've realized over the past two weeks just how much I missed the city.
Here are two Instagram posts with some context:

And here are three more images from just one day: February 2, 2022.

This is a footbridge over the FDR I hurried across at daybreak. It was Ground Hog's Day, of course, and the image here is over-exposed. I didn't see my shadow: 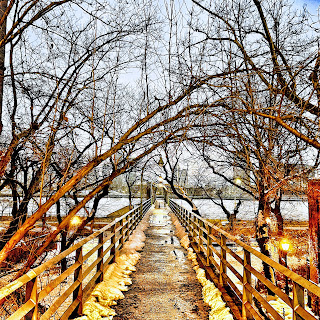 This is Grand Central Terminal a little later that morning. It's one of my favorite places in the city, and February 2nd also happened to be its 109th birthday: 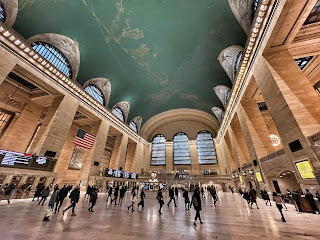 This is St. Patrick's Cathedral even later that same morning. Police had begun gathering on Fifth Avenue (I had crossed Park Avenue accompanied by officers from San Francisco) for the funeral of NYC police officer Wilbert Mora. He was only 27 and had been shot and killed along with officer Jason Rivera while responding to a domestic disturbance on January 21. 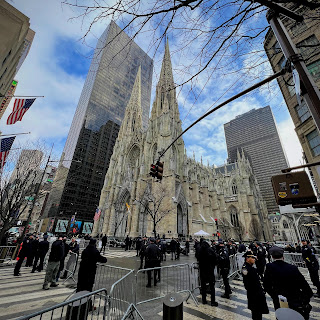 New York is complicated.
It isn't like anywhere else.
I love that it has depth and substance and beauty, even when drained of color.


“To him, no matter what the season was, this was still a town that existed in black and white and pulsated to the great tunes of George Gershwin.”