It's my favorite sister's birthday today. 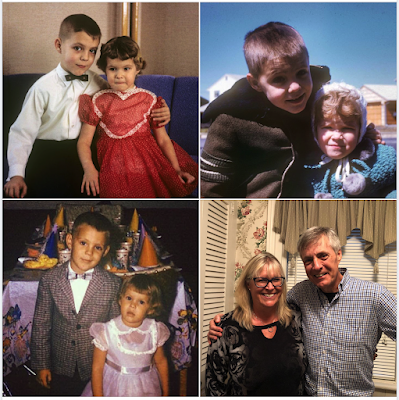 Well, OK, Sue is my only sister, but I'm pretty sure she'd be my favorite if I had 100 sisters.
Even though we live separate lives in separate states, I've been able to visit her this week.
My younger sister and I spent the day together yesterday, a rainy Wednesday. With outdoor plans scuttled, we went to see the new "Top Gun" movie. Sue had already seen it, but she wanted to see it again, and she thought I'd like it.
I loved it.
I was almost moved to tears during a few scenes. Silly me. I managed to keep my emotions in check.
I rationalized that I was so sentimental because it was my first visit to an actual movie theater (with a big, live audience to boot) since before the pandemic.
Also, it was my first visit to a movie theater with Sue since we were kids.
We saw "Jaws" alone together during a family vacation at the Jersey Shore. The MPAA had generously rated "Jaws" as PG, but my parents probably only allowed us to go because underage Sue would be there to chaperone me.
Sue doesn't remember this long-ago outing with her "big brother," probably because it pales in comparison to her many teenage adventures as one of the cool kids.
Throughout our young lives, Sue was popular and confident, while I was awkward and shy. Yet she always defended me. She has always had my back.
Even today, Sue's loyalty is unfailing, and we're still different people. I don’t think many others, meeting us for the first time, would peg us as brother and sister.
More to the point: Although I'll always be physically bigger and grayer, she's the bigger person.
Yesterday, as Sue's husband drove us back home after we had watched "Top Gun," he turned to her and asked, "You didn't cry again in the theater, did you?"
If I'm ever going to be as caring and as loving as my little sister, I'm gonna need a bigger heart.
Posted by Bob Varettoni at 12:01:00 AM