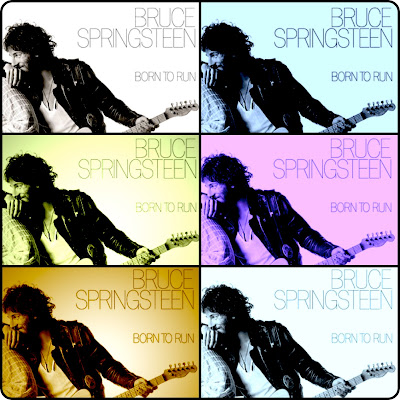 Are You Scared? Are You Thinking That Maybe You Aren't That Young Anymore?

Scene 1:
The disambiguation page on Wikipedia lists 21 possible references to “Thunder Road.” But as anyone knows who grew up in New Jersey in the decade of the ’70s, there’s really only one. It’s the song recorded by Bruce Springsteen in 1975. A song without a chorus.

Scene 2:
It’s sometime after 8 p.m. on Saturday, October 9, 1976. I am standing right next to one of most unobtainable women on the Notre Dame campus. She barely knows me. We’re in Section 11, Row 7, of the Athletic & Convocation Center. I know these logistics because I still have the ticket stub in 2022, with its faded price of $6.50. More vivid is my memory of fair Rosie from Phoenix, AZ. The goosebumps and raised, wispy hairs on her bare, freckled arms almost graze my face as she raises her hands and we shout in unison, “Show a little faith, there’s magic in the night. You ain’t a beauty but, hey, you’re all right.”

Scene 3:
People magazine has named the actress Julia Roberts the most beautiful woman in the world five times, beginning in 1991 and most recently in 2017.

Scene 4:
In 1972, I leaned in to kiss Bobby Jean on her coral-red lips during a game of chess in her living room in Shrewsbury, NJ, where she’s lived forever. Bobby Jean’s all right; she always fit in. In 1974, I arrived on the Notre Dame campus 725 miles to the west, having never lived outside of New Jersey. I was immature for my young age. I grew a mustache to appear older; I didn’t fit in. By 1975, Bobby Jean and I were an uncoupled sonnet, doomed to be friends. Alone in my dorm room, like a Roy Orbison lyric, I donned corded, freakishly oversized headphones to listen to “Thunder Road” again and again. Eyes closed, haunted by Shakespearean ghosts, I’d imagine driving 725 miles to the east to rescue Bobby Jean from all the losers who pretended to love her. Just like me, I realized by the end of the decade. Just like me. 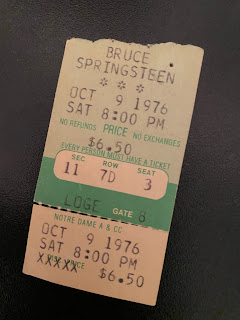 Scene 5:
In 1974, Bruce Springsteen wrote “Thunder Road” at his living room piano in Long Branch, NJ. His band’s first two albums had made him a critical darling but still an acquired taste outside of rabid fans in New Jersey and pockets of Arizona. In August 1975, a stripped-down arrangement of the song opened the band’s next album, “Born to Run.” By October 1975, Bruce appeared simultaneously on the covers of both Time and Newsweek magazines. In October 1976, he performed before 12,002 fans at the ACC on the Notre Dame campus. Soon thereafter and to this very day, when performing “Thunder Road,” he simply lets the crowd sing the lyrics beginning, “Show a little faith…”

Scene 6:
In 2022, my wife of over 35 years is scanning celebrity news on her iPad after sunset in our living room in Hackensack, NJ. In the spotlight of a table lamp, Mary is sprawled across her favorite chair, her right leg hanging over one of the armrests, like Hyman Roth in 1974’s “The Godfather: Part 2.” “Listen to this,” she laughs. “Julia Roberts was once asked which song lyric described her most accurately, and she chose my favorite line from ‘Thunder Road’: ‘You ain’t a beauty but, hey, you’re all right.’” Mary laughs. “Isn’t that the best rock and roll lyric EVER?” she asks rhetorically, then adds that Bruce could only have written “Thunder Road” when he was young, because it’s filled with so much passion and promise. I tell her I disagree, then cross the room. Our eyes meet, and I brush aside a strand of her dyed red hair to steal a kiss. “Show a little faith,” I whisper. “I think you’re more beautiful than Julia Roberts.” Then I take Mary by the hand and turn out the light, revealing an ordinary New Jersey night.

“Baby,” I say, “let’s go for a drive.”
---------
*- As I learned in the personal essay course I wrote this for last week at Project Write Now (it's a great, New Jersey-based organization, and I highly recommend their online courses), a braided essay weaves threads together into a written work that's a cohesive whole. In this case, the prompt was for one paragraph to be simply factual, and the next to be personal. Today is also the anniversary of the day "Born to Run" was released in 1975.
My previous two posts on this site (the "hermit crab" essay posing as a pharmaceutical ad and the poem about prayers) are also based on writing I did for the PWN course.
Posted by Bob Varettoni at 8:29:00 PM