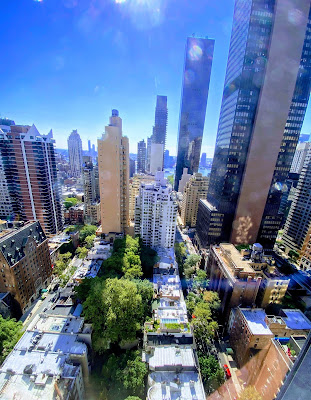 At the close of this summer of discontent, I side with Jerry Seinfeld and Patti Smith, and against James Altucher, on the subject of New York City.

Not that it matters. All four of us are privileged, so New York isn't really ours.

Also, as E. B. White eloquently noted in the 1949 foreword to his love-letter/essay, "Here Is New York," the city can't be written about or "brought down to date" by anything other than opinions and observations offered at the speed of light.

What if, in 2020, we have the speed-of-light technology to see into the soul of New York? 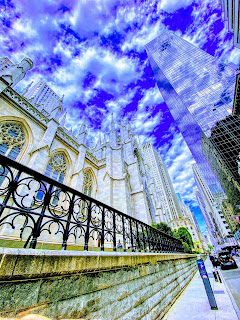 This summer, returning to work in New York in mid-July after sheltering at home in New Jersey in mid-March, I took many cell phone photos that needed no development process. The files automatically uploaded to a digital cloud. Instantly, using a mysterious algorithm that mere mortals cannot initiate, Google's vast artificial intelligence (AI) engine selected several images to machine-edit.

My little corner of the Google Photos cloud is now filled with "auto-stylized" images of New York in the summer of 2020 that differ from the New York I saw with my own eyes.

This technology is not new, but it appears to be evolving. Before the pandemic, after taking cell phone photos of New York, I would often be surprised to see an additional image or two that had been auto-stylized by Google in my photo feed.

Almost invariably, the AI had edited the images in black-and-white -- as if Google had the same nostalgic view of New York as E. B. White in 1949.

In 2020, many more of these auto-stylized images have magically appeared on my phone in a very different form.

As if it has transported me to the land of Oz, New-York-as-stylized-by-Google now appears in hyper-vibrant color.

My return to New York was a plot hatched by my daughter Maddy, who lives in an East Side apartment just one block from composer Irving Berlin's former home, two blocks from Katharine Hepburn's former home, five blocks from the workplace where I met my wife Nancy, and eight blocks from the site of our first date (when Nancy lost her wallet outside a movie theater playing "The Natural," yet with great relief found her cashed paycheck stashed separately in her purse... for we all lived from paycheck to paycheck in 1984, the year before E. B. White died).

My daughter and I are enamored with New York's poetic nature. Poetic, in the sense that it "compresses all life... into a small island and adds music." That's how White describes the city in his famous essay. 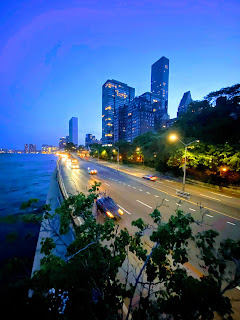 He also describes his enchantment at living in such close proximity to so many magical people. For White, only 18 inches separated these random encounters -- the distance between his luncheonette booth and one frequented by Fred Stone, a local actor who played the Scarecrow in the Broadway version of "The Wizard of Oz."

When I lived in New York before marrying Nancy (29 blocks from Maddy's apartment, on the other side of Manhattan), I think perhaps I once shared a wordless ride on the 7 Train to Shea Stadium just 18 inches from writer and Mets fan Harper Lee.

In 2020, 18 inches has become 6 feet, and my daughter has experienced her own random link with Oz in a casual nod of recognition exchanged with actress Mary-Kate Olsen in her Turtle Bay neighborhood.

Maddy is perceptive and literate. In April, she offered great editing suggestions to a pandemic-related short story I wrote. A few weeks later, she said she planned to be out of town for a week and suggested, just like White's editor Ted Patrick, that "it might be fun" for me to hole up in the city in mid-July to write about New York.

Maddy offered the use of her apartment, but between her work responsibilities and other family obligations of my own, the "week" turned into the Sunday night before I was scheduled to return to my office at 777 3rd Ave., between 48th and 49th streets. Instead of spending several days alone in 90-degree heat at the Algonquin Hotel, I spent a single, comfortable, air-conditioned night with Nancy in Turtle Bay. 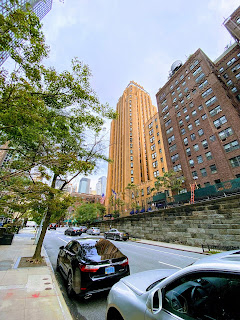 We drove in and parked that Sunday at the U.N. Plaza, where Harper Lee's friend Truman Capote once lived, and Nancy and I gingerly explored our old stomping grounds.

As I posted here last month, a feeling of great forlornness and forsakenness struck us. We had the sense that New York had become strangely vulnerable during the pandemic.

We were comforted by a visit to an old, familiar bar.

"At least Murphy's will always be here," I said -- then learned in the weeks that followed that it too had closed for good at the end of August.

Which brings me back to Google, and its conjuring of New York's ghosts.

E. B. White wrote that summertime is a good time to re-examine New York and to receive what he called its gift of privacy.

So much is happening in New York at any given time, he reasoned, that individuals can choose whether to attend or pay attention to any particular thing, and that no one thing can throw the city off balance or inflict itself on a person.

He also wrote that although no plague could wipe out New York, the city was -- with the then-recent development of planes carrying nuclear warheads -- for the first time in its history, destructible. 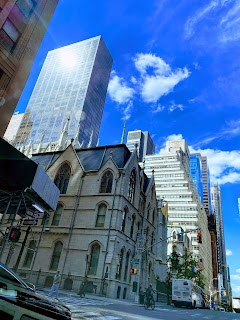 It seems to me that in 2020, Google (which I am using here as shorthand for "Apple, Microsoft, Amazon, Facebook, Twitter, ubiquitous connectivity and high-speed Internet access") has dramatically changed these equations, and White is now wrong on both counts.

People nowadays can ignore what they choose, creating their own realities from a vast global storehouse, with myriad ways to experience sudden rejuvenation. Because of technology, "New York" is now everywhere. And we now know that, over time, pandemics have the same destructive power as our bombs.

I think these stylized images are digital versions of the old willow tree that E. B. White wrote about.

Off and on in the '40s and '50s (and while he wrote "Charlotte's Web"), White lived in Turtle Bay Gardens, a complex of 20 contiguous townhouses in two rows on the north side of 48th Street and the south side of 49th Street between 2nd and 3rd Avenues. Personal favorites Bob Dylan and Kurt Vonnegut lived there in later years too.

The buildings enclose a private, central backyard. White particularly loved a willow tree that grew there. It stood outside his apartment window and next to a replica of a fountain at the Villa Medici in Rome. In "Here Is New York" he wrote that this "battered tree, long suffering and much climbed... symbolizes the city: life under difficulties, growth against odds, sap-rise in the midst of concrete, and the steady reaching for the sun."

He concluded: "Whenever I look at it nowadays, and feel the cold shadows of the planes [bearing possible annihilation overhead], I think: 'This must be saved, this particular thing, this very tree.' If it were to go, all would go..."

As it turns out, White's willow is now gone... like Murphy's, like the New York we all remember. The tree died and was removed in 2009.

With support from composer Stephen Sondheim and other Turtle Bay Gardens residents, Urban Arborists in the Red Hook section of Brooklyn cared for the tree until the very end, and founder Bill Logan has been nurturing its cuttings so that they may be replanted in parks across the city.

(PS - On Sept. 23, Logan sent a note that Urban Arborists replants more cuttings from White's willow every year. The original offspring from the tree "is now more than 40 feet tall in our yard in Brooklyn.")

All this is alright with me. I don't want New York back again, back the way it was. I'm excited by the prospects of the New York that is to come.

Besides, Google has my back. It is creating little digital snapshots of an idealized version of New York that will truly live forever. Technology has dispersed these ageless pixels into the ether, to be perhaps deciphered one day by the life forms discovered this past week on the planet Venus. 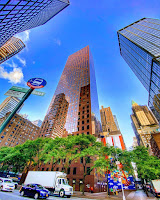 I cannot bring New York down to date on paper. But if each picture can be worth a thousand words, then the seven auto-stylized images posted here are Google's homage to White's 7,000-word essay.

The photo on top of this page, for example, is a Google-styled vision of Turtle Bay Gardens. When I returned to my office on July 20, I realized -- for the first time -- that our Board Room windows on the 23rd Floor overlooked these buildings, and the interior gardens where White's tree once stood.

Our building had been vacated due to the COVID-19 lockdown, and the windows had not been cleaned in more than four months. Google's AI brightened my camera's God's-eye view and nostalgically blurred the dirty, dried droplets of rain as if they were heavenly stars.

Google -- like me and Jerry Seinfeld and Patti Smith -- knows the value of this city... this mischievous and marvelous monument which, not to look upon, would be like death.

This post is dedicated to White's stepson, the writer Roger Angell, who is celebrating his 100th birthday this weekend. Angell originally commissioned White to write "Here is New York" for Holiday magazine, and his foreword graces the 1999 edition of its publication. Below is Edward C. Caswell's illustration of White's willow tree from the tailpiece of the original 1949 edition. 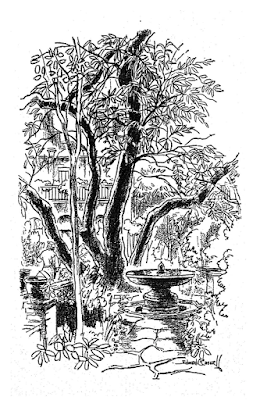