What Did You Admire About Your Father? 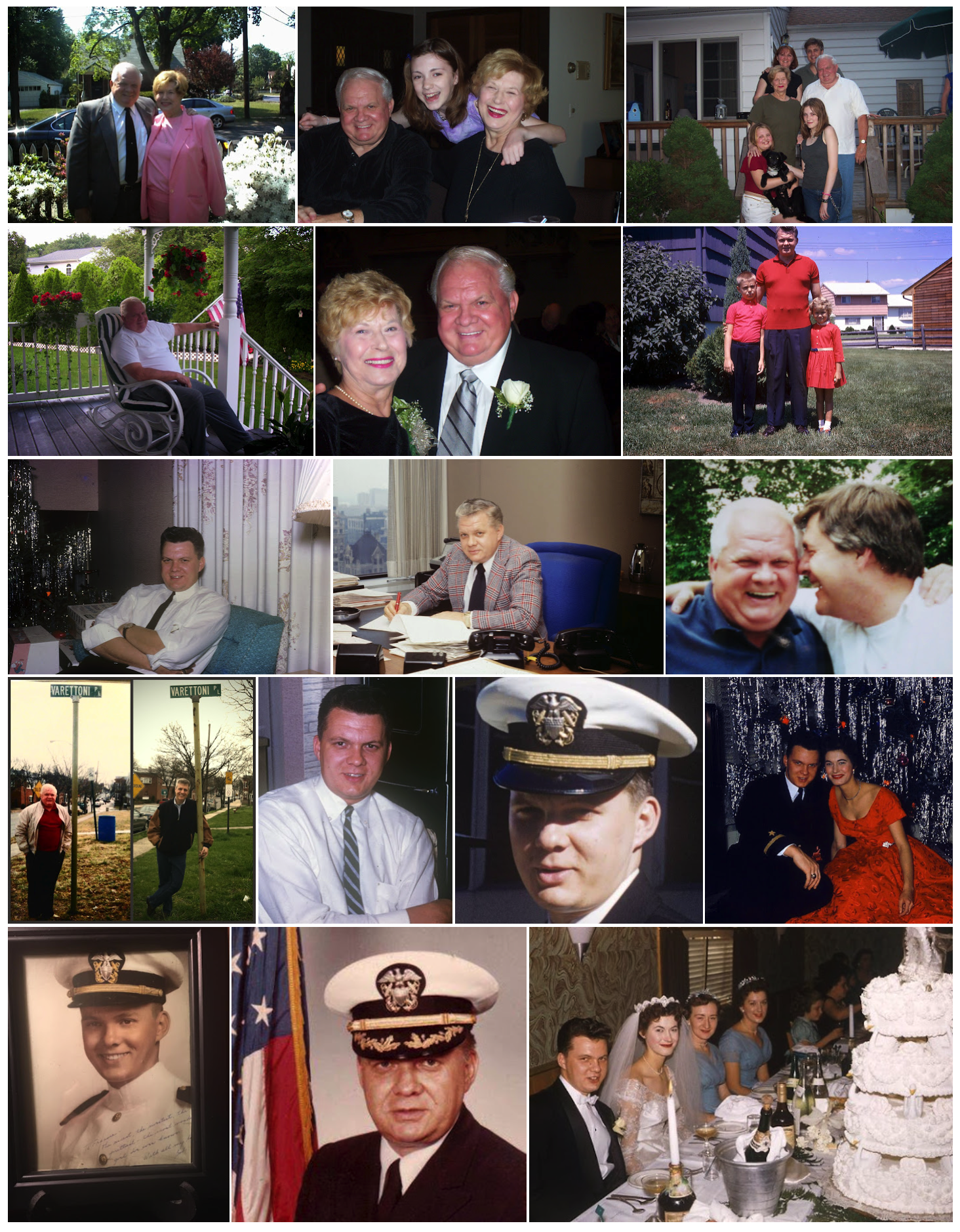 Dad died 16 years ago today, and above are 16 images of him.
The one in the middle of the second row is the last photo I have of him. It was taken Oct. 9, 2005, at St. John the Baptist Cathedral in Paterson, NJ, following a Mass for couples celebrating their 50th and 25th wedding anniversaries that year.
Earlier today, Mom told me that during that Mass Dad had whispered in her ear, "You look like you should be sitting on the other side of the aisle" (where everyone was 25 years younger).
For my recent birthday, my daughters purchased a subscription to StoryWorth for me, which provides online prompts to record family stories every week. The question for me to answer a few weeks ago was, "What did you admire about your father?"
I had a lot of material to answer that, some of which I previously published here.
To begin with, I recall three scenes from my life illustrate traits I admired about him.
Scene 1
As much as Dad wanted me — all my life — to attend college at Notre Dame, he didn’t say a word in protest when my initial decision was to attend Holy Cross.I, of course, changed my mind.
Scene 2
As much as Dad loved our ugly, black Chevrolet Impala, the only thing he said when I called him at work after practically totaling the car following my first job interview after college was, “Are you all right?” “Yes,” I said. He replied, “That’s all that matters.”My safety was Dad’s only concern.
Scene 3
As much as Dad valued self-reliance, when I was 2nd Grade, I couldn’t convince Dad not to rush out one evening (in the then-new Impala) to St. James Convent in Totowa to confront a nun who had unfairly, and mistakenly, struck me after witnessing someone who looked like me damage school property.
The nun never backed down, even though she was in the wrong. Still, Dad always had my back.(PS- The classmate who did the damage and never fessed up now boasts of having “a PHD in Beerology at Seton Hall University” on social media. Meanwhile, Dad graduated from Seton Hall with a real business degree, and with honors.) 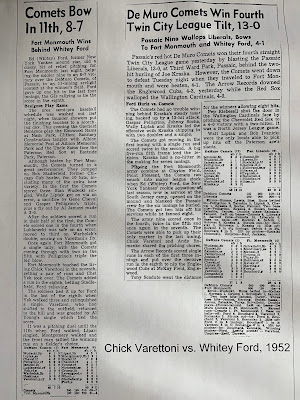 As I’ve written before about Dad, he threw the first baseball ever thrown to me.“He probably dropped it,” he’s saying right now to a passing angel.He’s saying it with a smile, I am sure. He’s joking. He doesn’t think he was a better man than I am.
I think.
In fact, I am only sure of one thing: Dad always, even to this day, supports me.
Of course Dad (aka Bob "Chick" Varettoni) was much better than me at baseball, having pitched against professional athletes — including two head-to-head matchups with New York Yankee Whitey Ford at age 20 — and entering the Passaic Semi-Pro Baseball Hall of Fame based on a career that began at age 13.When Dad graduated from college (he had qualified for both an academic and sports scholarship at Seton Hall), Nonna bought him a sharkskin suit with money she had saved by hiding it from Nonno. Dad wore it that day... then took off for two years of active duty with the Navy.
He returned from overseas on a Friday, and next wore his sharkskin suit the following Monday on his first day commuting to a job at New York Telephone. He worked the ensuing 34 years there and never took a sick day. He had literally sailed around the world with the Navy (and subsequently hated water), but he figuratively lived and died in New Jersey.
Dad claimed he had no influence in getting me a job at the same company (then called NYNEX) in 1985. I find that hard to believe. I worked 34 years there too, and never took a sick day.
Since we worked for the same company for a time before he retired, for several years after he retired I’d get phone calls at my desk where as soon as I’d identify myself, I’d hear a pause on the other line. Then the person would exclaim, “You’re not Bob Varettoni.”This was a constant reminder of my existential failings. 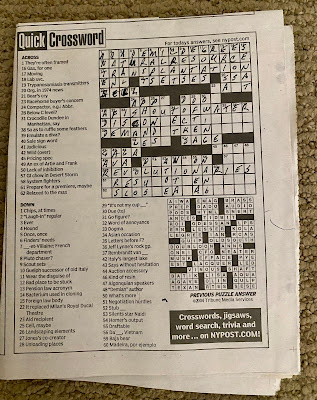 Dad drank bourbon. He shared his birthday with his mother. He was a talented calligrapher and artist, and at age 16 drew an intricate and richly flourished rendering of the seven last words of Christ. He wanted to be an architect when he was in high school.
Dad liked to spend money. He invoked fear in house cats. He sometimes had terrible taste in music (witness Aker Bilk, Tom Jones and Trini Lopez), but made up for it by his love of Dixieland and the Mills Brothers.
Dad loved crossword puzzles (pictured above is the one that was left uncompleted the day before he died). And he kept a copy of “The Prayer of St. Francis” taped to the back of the medicine cabinet mirror in his tiny downstairs bathroom in Totowa. 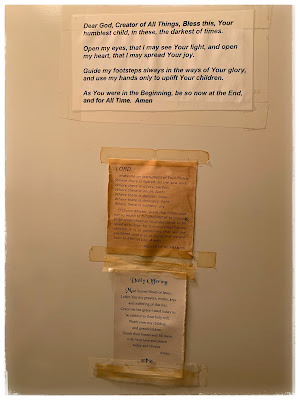 At his best, like all of us, Dad had the soul of a poet. He often quoted Shakespeare when he was drunk. While cleaning out the garage last summer, I found a folder of long, badly-rhymed “odes” that Dad had written for work and Navy Reserve colleagues as anniversary or retirement gifts.I found no “Ode to Dad” in that folder. I have only a dozen fragmented images of him, from memory, that will have to do:1.    Sharkskin suits and Navy dress whites2.    A 13-year-old sandlot pitcher snapping off a tightly spun sinker3.    A 16-year-old’s calligraphy drawing of Christ’s last words4.    The smell of Old Spice and hair gel5.    Cigarette smoke (Kents)6.    Eggs over easy, bacon and rye toast (his favorite breakfast... I always order this at a diner, to remember him)
7.    A round stain of bourbon on the counter of a bar8.    Crafting a too-perfect Pinewood Derby car for his son9.    A 32-year-old storming a convent to defend his son10.    The intricate paint job on a precision plastic model of the U.S.S. Midway11.    Mills Brother records (he’d also sing “You Never Miss the Water Till the Well Runs Dry” when drunk)12.    Sentimental tearsAnd, finally, here are three lessons I learned from his life…Lesson 1: Above all, be of service to others. 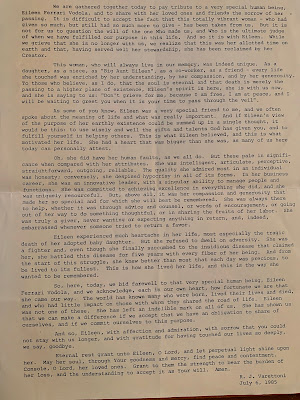 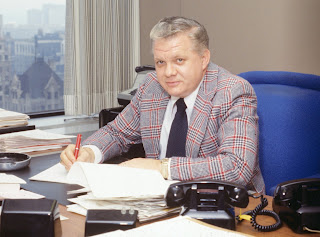 Here’s a photo of Dad behind his desk at 1095 Ave. of the Americas, many years before it was called Salesforce Tower. I still wander past this building on walks to or from my current job. Each side of the building’s plaza near Bryant Park is now guarded by a 13-foot metal statue of a superhero, and I think of Dad every time I walk by.You may think, by his Don Draper good looks and jacket, that Dad was an advertising executive. He was creative enough to be one. But no, he was head of the customer service department… the executive appeals branch… in charge of handling all the especially tough complaints.Dad was, for all his noble qualities, possibly the most impatient man in the world. So you’d think this would be a horrible job for him. The last thing any sane person, his son included, would ever want to do would be complain to my father.But instead of channeling his impatience at customers, he channeled it at silly processes and ineffective management… and he had a long and successful career.
Lesson 3: Love is made manifest by self-discipline and loyalty.
No one was ever a more loyal friend than my father. When he died, I heard this from many of his friends dating back to high school and, especially, from his service in the Navy.
Dad was a Navy reservist. It was a side job he held for decades while working at the telephone company. He achieved the rank of captain in the Intelligence division. He loved it. He valued the discipline he found in the Navy – which probably accounts for why he was so good at his day job at the phone company.
---------
In his whole life, just like Superman, there was only one thing Dad was defenseless against.His kryptonite was a pack of Kent cigarettes. Until his 60s, he could never give up his three-pack-a-day smoking habit. I saw him try to quit, and fail, several times while I was growing up. Never did he look so defeated than when he’d relapse and start smoking again.And yet after a second heart attack... after his doctor warned him that he would never live to see my newborn daughter grow up unless he stopped smoking... Dad quit that very day and never smoked again. I can’t imagine how hard that must have been. 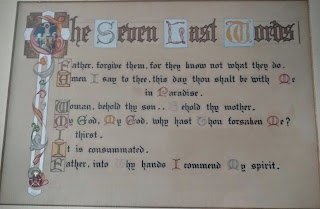 Because Dad devoted his life to his family, I can tell you that even though today marks 16 years since he died, his wife and children have remembered him every day since. Mom dreams of him often, and his memory also still impacts the lives of his grandchildren.In the end, this is what I admire most about Dad. He was bigger than life. He has lived on at least 16 years after his death.To this day, the memory of him haunts me, and inspires me, and drives me to try to be a better person.
Posted by Bob Varettoni at 9:19:00 PM