5 Things I'd Tell My College Self 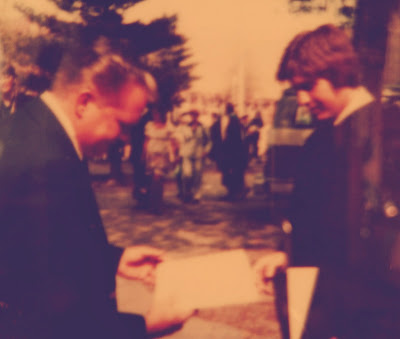 My apologies for the aging, yellow Kodak print of Dad and me examining my diploma after the graduation ceremony on the Notre Dame campus decades ago. It’s really all I have left.
Dad always wanted me to go to Notre Dame, so I did… to make him proud of me.
The first thing I’d tell my college self would be: “You don’t have to go to Notre Dame to make Dad proud.”
I miss Dad terribly. He died what will be 17 years ago next month. I learned in the years since that Dad was unconditionally proud of me.
Also, Dad didn’t know everything. For example, he was a lifelong Yankees fan. I started out that way too, but the older I get the more I appreciate the words of Roger Angell, who would have turned 102 this week. He wrote that cheering for the Yankees’ perfection is “admirable but a trifle inhuman.” The Mets’ “stumbling kind of semi-success can be much more warming: there is more Met than Yankee in every one of us.” I agree.
Regarding everyday life in general, I’d advise myself of two things: 1. “Be kinder than necessary” and 2. “Don’t worry so much.”
Regarding business, I’d advise myself of this truth: “Everything you need to know about business success can be found in two movies: ‘The Godfather’ and ‘The Godfather: Part 2’.” (A simple Google search can fill in the details.)
Finally, about the big picture, I think back again to Notre Dame.
Fr. Ted Hesburgh, the university’s president from 1962 to 1987 who passed away in 2015, traveled far and wide in pursuit of social justice. I greatly admired him.
Fr. Ted was friends with popes and presidents, and his accomplishments were many. Touring the old LaFortune Student Center in a visit back to campus nearly five years ago, I stopped to admire a large, black-and-white portrait of Fr. Ted linked arm-in-arm with the Rev. Dr. Martin Luther King Jr. at a civil rights rally at Soldier Field in Chicago in 1964.
Later that day, walking with my wife, we entered a cemetery on the edge of campus that had always intrigued me. It was filled with small cross-shaped headstones in neat rows. In college, I had simply assumed they were veterans’ graves.
No, my wife said, reading the markers in 2018, these were graves of all the brothers and priests of the Congregation of Holy Cross who had lived and worked at Notre Dame. They are buried in chronological order… one right after the other, with no marker more distinct than the next.
That made it was easy for us to find Fr. Ted’s grave, in a remote Indiana cemetery, marked with the same stone as all his brothers. Everyone buried there had done his part, lived and died, to the best of his talents, for a higher purpose than individual glory.
So this is the final thing I’d tell my college self: No person is more important than another; everyone contributes to everything.
Only the passage of time reveals the true import our efforts, and our biggest heroes are often buried in the most modest graves. 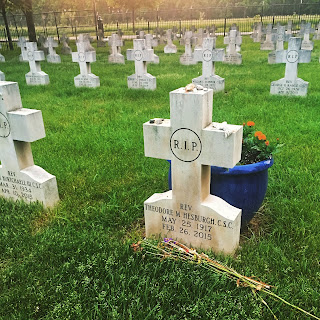 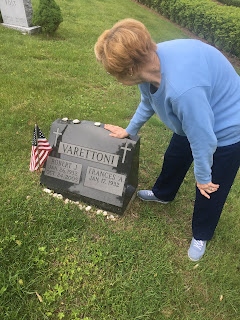