Visiting the Warhol Museum: Ambivalence and Awe in Pittsburgh


Nancy and I took a road trip to Pittsburgh earlier this week, ostensibly to see the baseball Pirates host the New York Mets.

On our way to an afternoon game, we crossed paths with the Andy Warhol Museum. I was excited to see the works of this New York City legend, not realizing that he was born in Pittsburgh. Also, not realizing that I was about to enter the largest museum in North America dedicated to a single artist.

The experience was a head-spinning, comprehensive portrait of the artist. To me, it was a portrait with flaws.

Let's talk about the elephant in the room. The photo below, in one of the main exhibit areas, is a work by Keith Haring, who painted over a papier-mâché sculpture Warhol had purchased.

Then I looked around at what I thought were Picassos on the walls. They were works by Warhol in Picasso's style. Warhol, it seemed, tried to be like everybody else.

I looked at all the photographs on display, taken by other people and manipulated by Warhol. Then I watched some screen tests (filmed, silent portraits of visitors to Warhol's Factory studio in New York). Some on video, and many of those surrounding Warhol in black-and-white photos, seemed to be broken people. I read about suicides in the fine-print captions of various screen-test participants, actors in his films, and subjects of his art.

On one hand, Warhol produced work that seemed to exploit other people. He mastered the art of appropriation, taking possession someone else's work or image. As Warhol himself once said, "Art is what you can get away with."

On the other hand, his art put a spin on banality to create something with more meaning and permanence.

With ambivalence, I also watched a few videos of Warhol while there. He seemed elitist. In real life, I fear he'd make sure I knew I wasn't one of the cool kids.

But then I noticed more layers to his life: His collection of kitschy folk art was heart-warningly "normal" (to my worldview, at least), like a visit to my guileless mother-in-law's house in Nutley, New Jersey.

Also, I read the Mass card from Warhol's memorial service at St. Patrick's Cathedral in 1987, where Yoko Ono delivered one of the three eulogies. On the card, the parish priest from the Church of the Heavenly Rest on 5th Avenue and 90th Street noted that Warhol poured coffee, served food and cleaned up after meals provided there to the homeless, hungry and friendless on Thanksgiving, Christmas and Easter.

Warhol was only 58 when he died. I'm in awe of his accomplishments in his too-short life.

I'm older than that now, and I've never done as much hands-on for those in need.

Also, all my creative and artistic achievements could fit in a single folder in one of the filing cabinets on the entire floor of the museum devoted to Warhol's archives. All seven stories of the museum in Pittsburgh display only a portion of all Andy Warhol's creative work.

I'm a weekday commuter to New York City, fated never to be world-famous for 15 minutes or eulogized by a pop culture icon. As I write this on a Saturday morning in New Jersey, I'm watching Bugs Bunny cartoons and Nancy is reading the news.

I take small comfort in the fact that I lead the type of ordinary life Andy Warhol might have appropriated to turn into art.

Following are some scenes from the exhibition. 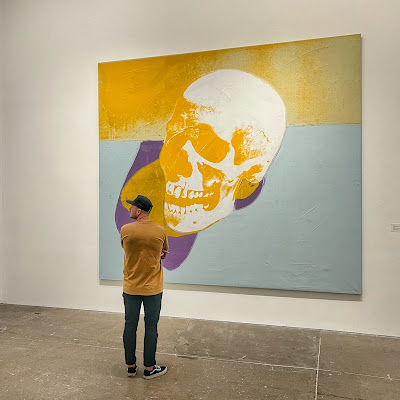 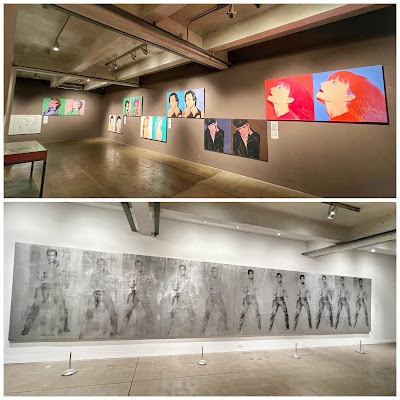 The obligatory gift shop in the lobby, and the world's last (and most decorated) pay phone in the basement... 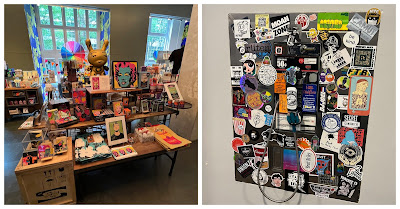 Leaving the museum, we walked across the Allegheny River on the Andy Warhol Bridge. The homeless, hungry and friendless were pan-handling; the tourists pretended not to notice.

Several love locks attached to the grill of the walking path were numbered Master locks. With the right combination, these locks can be easily removed should love prove not as lasting as art... 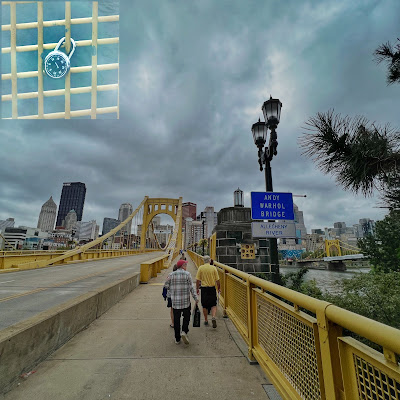