About the Varettoni in the Hall of Fame

So, of course, I’ve posted a baseball card photo of myself from one of the exhibits at the Hall of Fame in Cooperstown, NY, on Facebook and Twitter.

This only reminds me that, in real life, there’s a real Varettoni in a baseball Hall of Fame.

Bob “Chick” Varettoni was inducted into the Passaic Semi-Pro Baseball Hall of Fame on Friday, May 3, 1996, at the Knights of Columbus Regina Mundi Hall in Clifton, NJ.

He was pitching semi-pro ball at the age of 13, featuring a nasty sinker he once tried to teach his son, with disastrous results. When Dad was 20, he twice pitched against New York Yankee great Whitey Ford when Passaic’s DeMuro Comets faced the Fort Monmouth Army team, during Ford’s military service.

Dad’s the second from the left in this photo from that night in Clifton. The kneeling man is Ted Lublanecki, a legend in NJ semi-pro baseball and a scout for the Philadelphia Phillies back in the day: 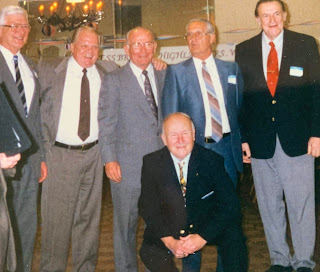 Here’s the text of the resolution entered into the Congressional record by Rep. William J. Martini of New Jersey on May 1, 1996. It details Dad’s accomplishments (click on the photo for a clearer image): 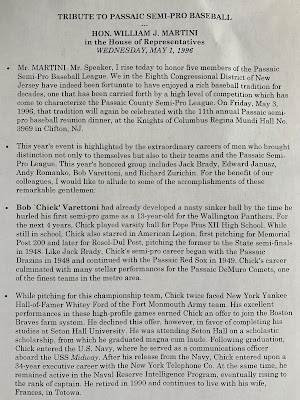 And here are the box scores of the games Dad pitched against Whitey Ford in 1952: 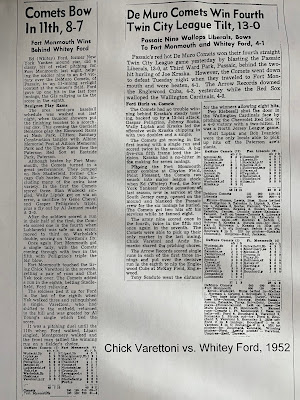 Here’s my ticket stub from that great night in 1996, along with Ted’s business card, in case you know of any good prospects: 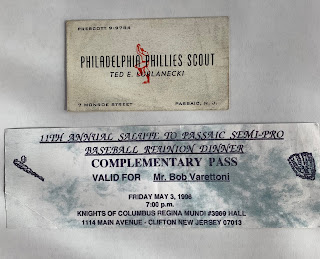 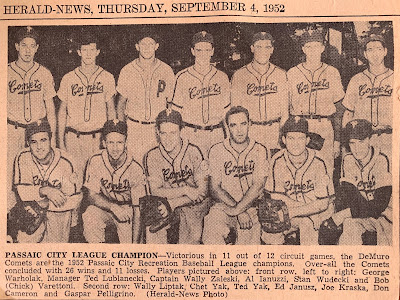